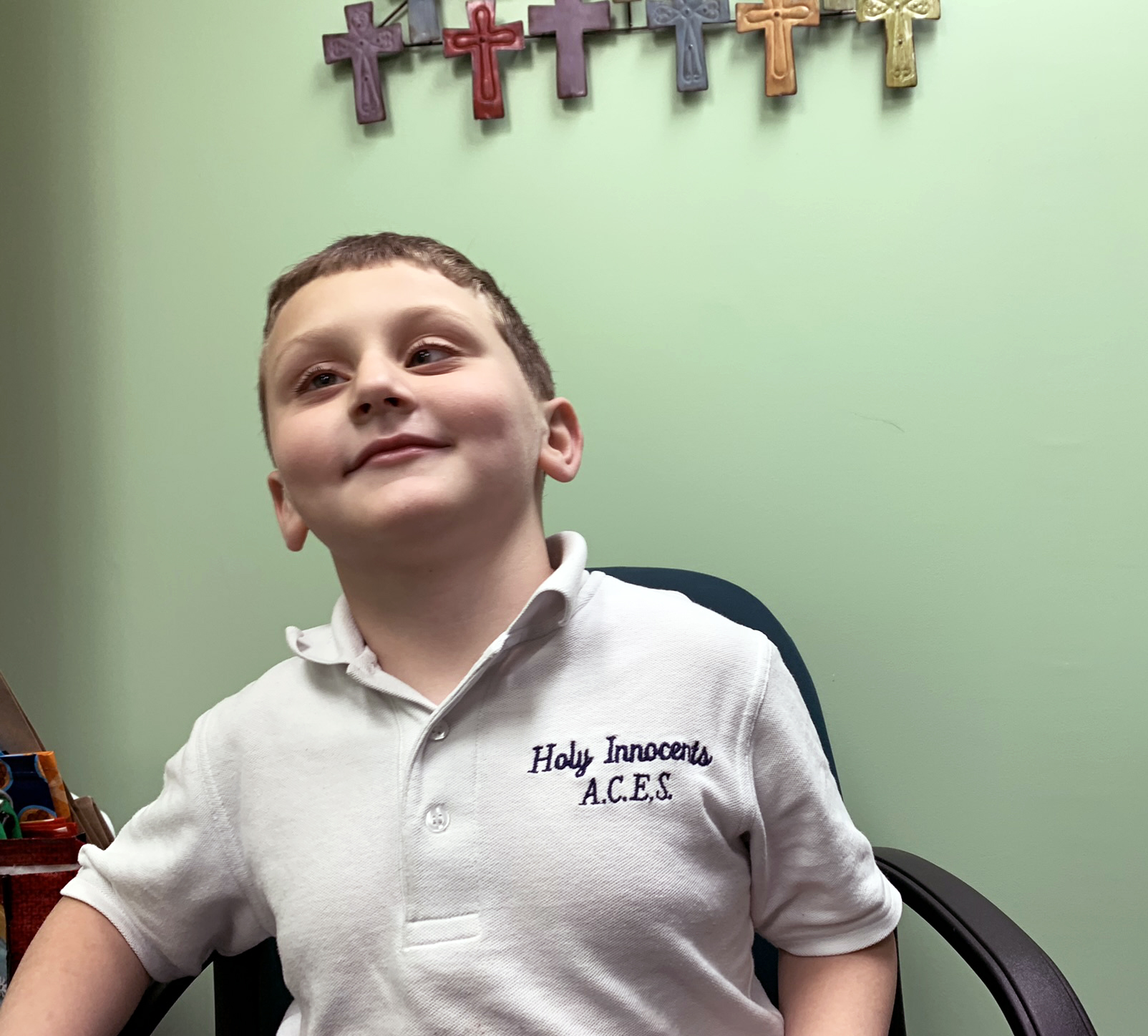 Brian Onuskanych, a first-grader at the Philadelphia-based St. Lucy School for Children with Visual Impairments, raised close to $180 for the people of Ukraine, now entering the fourth month of a brutal invasion by Russia. (Gina Christian)

A Catholic school student has been helping the people of war-torn Ukraine, one dollar at a time, as part of what he calls his mission to “protect the world.”

First-grader Brian Onuskanych, who attends St. Lucy School for Children with Visual Impairments in Philadelphia, recently raised close to $180 from classmates, teachers and school staff, going door-to-door – and desk-to-desk – with a large plastic pretzel container over a two-week period earlier this month.

The money was added to funds already gathered by the Immaculate Heart of Mary (I.H.M.) Sisters in residence at Holy Innocents Parish, where St. Lucy School — one of three archdiocesan schools of special education — is currently located.

St. Lucy principal and I.H.M. Sister Lisa Lettiere said the combined donations will be sent to one of several vetted charities supporting Ukraine, now entering its fourth month of a Russian invasion that has killed thousands and displaced an estimated 14 million.

Archbishop Borys Gudziak, metropolitan for Ukrainian Catholics in the U.S., said during a visit to West Catholic Preparatory School last week that “some 200 young lives” if not more are now being lost each day to the war, which continues Russian military attacks on Ukraine initially launched in 2014 with the attempted annexation of Crimea and the backing of separatist regions in Donetsk and Luhansk.

Onuskanych, who is of Ukrainian descent, has been keenly aware of the conflict’s impact on kids — and he got the idea for the fundraiser directly from the top.

“Jesus whispered it into my ear. He was like, ‘Brian, I want you to give money to Ukraine,’” said Onuskanych. “I told him that was a really good idea.”

The seven-year-old admitted to some initial hesitation, however.

And he did so with gusto, said Sister Lisa, whose great-grandfather was born in Kyiv.

As she was greeting students on their arrival one morning, Onuskanych announced to her he had “this really great idea,” with a goal of collecting “one million dollars,” said Sister Lisa.

The seven-year-old was diligent in his approach – and thorough, she noted.

“There wasn’t an adult walking around here he wouldn’t go up to,” she said. “Every therapist that walked in here, the art teacher, the music teacher, the gym teacher, the orientation and mobility specialist, the speech therapist – everybody.”

With Sister Lisa’s permission, Onuskanych took to the school’s public address system to rally his classmates, too.

“He’d say, ‘Everybody, talk to your mom and dad, and get some money,’” she recalled. “And a couple of times, he congratulated (the students) for their response.”

Onuskanych said he wants to see the funds used “to buy clothes, to buy food and to buy whatever (Ukrainians) need to keep them safe.”

He has a few creative ideas of his own for defending Ukraine.

When he’s not studying, Onuskanych visualizes using “(an) aircraft to patrol Ukraine and protect the borders,” one that uses “special gravity forces that pull Russia away … with a lot of wind and force.”

Details of the machine remain classified, he warned, as does his friendship with Ukraine President Volodymyr Zelensky.

“Don’t tell Zelensky I know him, because it’s a top secret,” joked Onuskanych.

At the same time, the real power for peace lies not in weapons or high-level connections, but in prayer, he said.

Onuskanych and his classmates “pray every day for Ukraine, and the boys and girls who are not in school like we are,” he said.

They also “pray for the people of Russia” as well as its president, Vladimir Putin, who directly ordered the 2014 and 2022 invasions of Ukraine after years of openly denying its sovereignty.

“We pray for God to soften his heart,” said Sister Lisa.

As the war enters its fourth month, Onuskanych said he’s keeping his eye on the eternal.

“In heaven there’s many mansions, many mansions. And there’s no death, no pain, no cold, no headaches, no sprained ankles and animals are friendly,” he said. “And there’s no wars … none of that bad stuff. Someday the whole world will be there with Jesus … we hope.”

NEXT: Students share joys, concerns about church at synod sessions