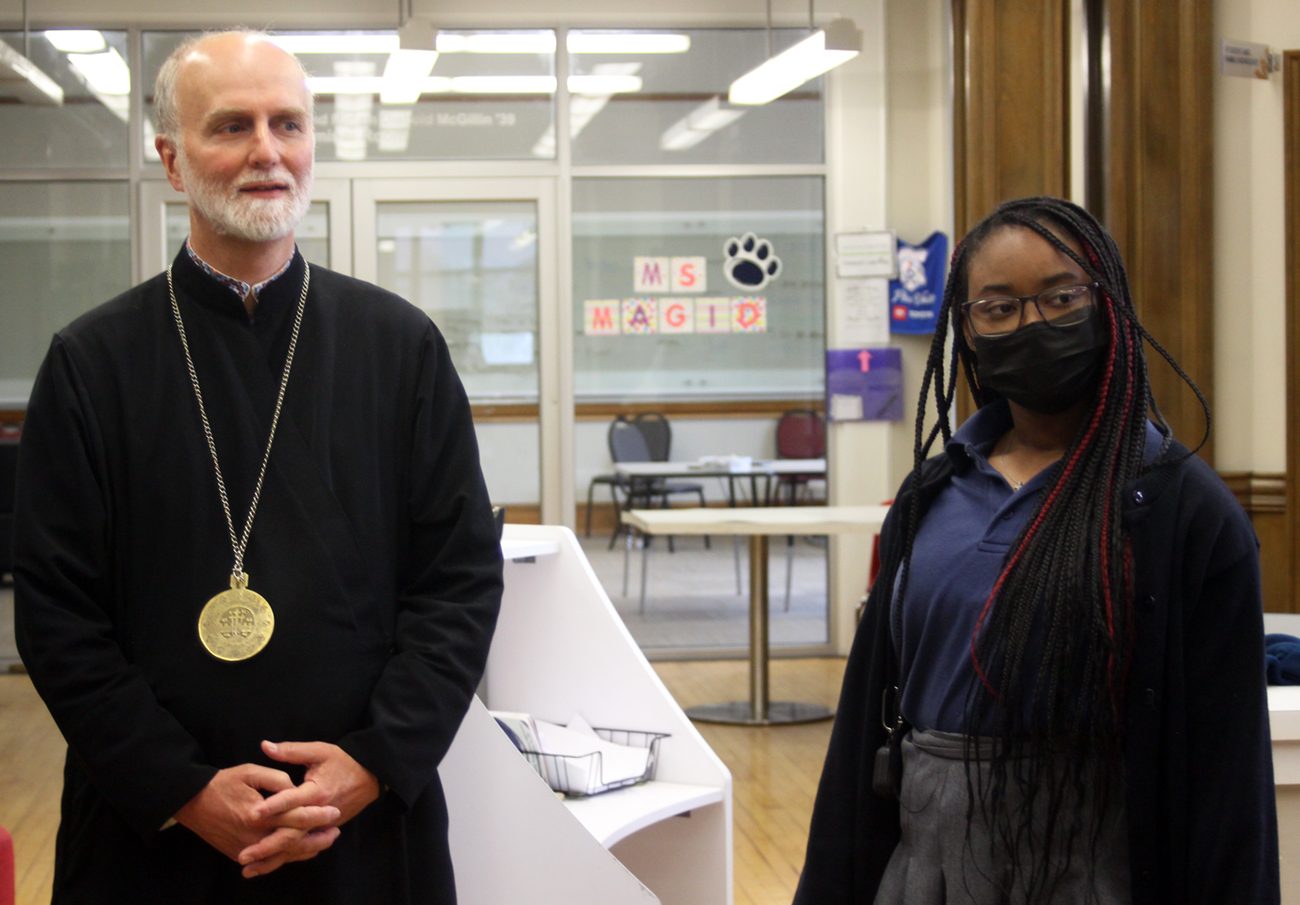 Archbishop Borys Gudziak met with students at West Catholic Preparatory School, such as junior Amira Winbush, during a May 19 visit to the school that included a tour, prayer service and discussion session. (Gina Christian)

Students at an archdiocesan high school joined in prayer for the people of Ukraine, while learning about the war in that nation from the leader of Ukrainian Catholics in the U.S.

Archbishop Borys Gudziak of the Ukrainian Catholic Archeparchy of Philadelphia visited teens at West Catholic Preparatory High School in Philadelphia May 19, touring the classrooms, taking a few impromptu basketball shots in the gym, and then leading a prayer service followed by a question-and-answer session in the school’s chapel.

Joining the archbishop were Father Volodymyr Radko, also from the archeparchy; Jesuit Father Andrej Brozovic, a trained architect visiting from Slovenia; and philanthropists Leonard and Helena Mazur, both West Catholic graduates as well as longtime supporters of the school and founders of its Mazur Scholars program.

The Mazurs themselves had fled war in Ukraine, when they were “carried out in the middle of World War II” as infants in their parents’ arms, with “bombs falling all over the place,” said Archbishop Gudziak.

The son of Ukrainian refugees, the archbishop spent 20 years in his family’s homeland, helping to found the Ukrainian Catholic University in Lviv, of which he is president.

The prototype for the school was established in Rome by the archbishop’s mentor, Patriarch Josyf Slipyj, who led the worldwide Ukrainian Greek Catholic Church from 1944 until 1984 — and who spent 18 years in Soviet work camps before being liberated at the request of Pope John XXIII.

Such history is repeating itself with the current Russian invasion of Ukraine, the archbishop told students.

Having gained its independence from the former Soviet Union in 1991, Ukraine “was developing, after communist totalitarianism, a democracy with free elections, free press, freedom of religion,” he said. “But Russia viewed that as a virus undermining its power, and it wants to kill that virus on Ukraine before it spreads.”

In 2014, Russian forces occupied and attempted to annex Ukraine’s Crimea region, while backing separatist states in Ukraine’s Donetsk and Luhansk regions. Since Russia launched its Feb. 24 renewed assault on Ukraine, thousands of Ukrainians have been killed and close to 14 million displaced. 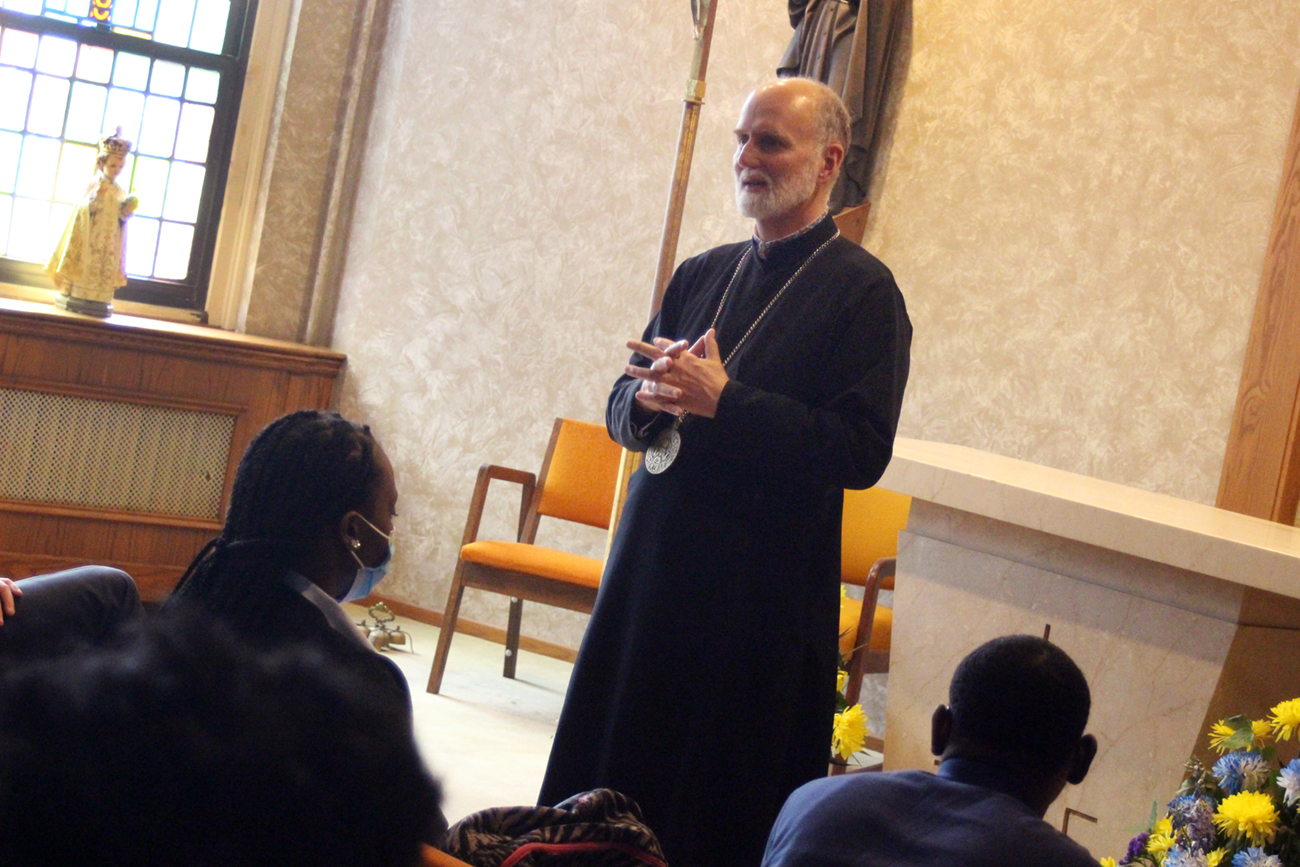 Russia’s invasion of Ukraine is claiming the lives of at least “some 200 young people a day,” said Archbishop Gudziak. (Gina Christian)

The war is claiming at least “some 200 young lives a day,” said the archbishop.

Discoveries of hundreds of civilian atrocities following the latest Russian occupation – including mass graves, summary executions and survivor accounts of rape and torture – have prompted a number of internationally-led criminal investigations. The nations of Estonia, Latvia and Lithuania have formally condemned the Russian campaign as genocide, while Zelenskyy has called for a Nuremberg-style tribunal to hold perpetrators accountable. One Russian soldier is already currently on trial in Ukraine for shooting an unarmed senior citizen.

Through aggression abroad and repression of dissent at home, Russia fosters “imperialism and colonialism, which breed slavery and control over other people,” said Archbishop Gudziak.

“Russia the slave owner” must “get free of this” mindset, he stressed, yet noted many global leaders fear Russia’s nuclear weapons capabilities too much to “tell the slave owner that slavery is over.”

Transforming that outlook will take “a long time,” he said.

Amid such hardships, “the most important thing is to give (oneself) to God’s will,” and understand that “we’re going to have our crosses, our sufferings.”

Christ models how to bear pain, sorrow and uncertainty with hope, said the archbishop.

“Life is really like what we celebrate at Easter; it’s a passage from death to life, from the cross to resurrection,” he told the students.

On that journey, miracles happen – including the “David versus Goliath” ability of an outnumbered Ukraine to withstand the current attack from Russia, a resistance that’s “happening because people are praying,” said Archbishop Gudziak.

Mercedarian Brother Dominic Whetzel, a theology instructor at West Catholic, said his students begin each morning by remembering Ukraine in their daily intentions.

“They have a sense of empathy, especially because I have friends there,” said Brother Whetzel, who wore a vyshyvanka, a traditional Ukrainian embroidered shirt, during Archbishop Gudziak’s visit, which coincided with Ukraine’s annual Vyshyvanka Day celebration.

Earlier in the semester, the school hosted a dress-down day to raise funds for humanitarian aid in Ukraine, he said.

Those efforts, along with staying informed about and praying for Ukraine, are essential, said Archbishop Gudziak, adding that the ultimate victory, “to live with God forever,” will be realized in heaven.

“I hope in a hundred years, when you’re all 116 years old can God calls you from this world, I’ll be there waiting for you and we’ll meet. And we’ll say, ‘Wasn’t it great to meet at West Catholic?’” he said. “And it will be not a time of war … there (will be) joy, and a fullness of peace in our hearts.”