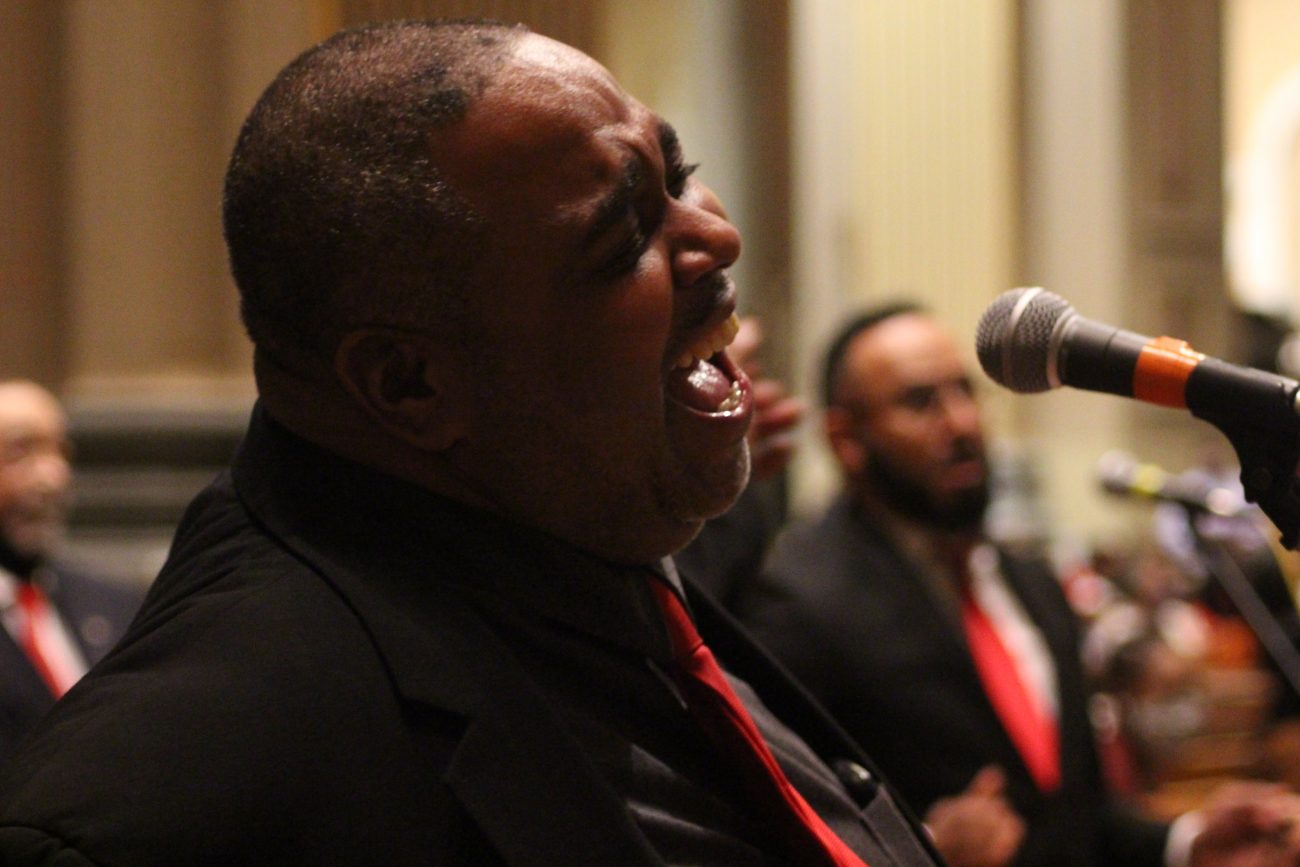 A member of the Philadelphia Catholic Gospel Mass Choir sings at the Cathedral Basilica of SS. Peter and Paul in this undated photo. The choir is one of several that will perform at “We Find Hope in You: A Concert for Racial Healing,” which will take place at the cathedral May 15 at 3 p.m. (Gina Christian)

A groundbreaking concert hopes to sound a new note in racial dialogue, bringing various cultures together for “one common thing: to worship God,” said organizers.

“We Find Hope in You: A Concert for Racial Healing” will take place May 15 at 3 p.m. at the Cathedral Basilica of SS. Peter and Paul.

Sponsored by the Archdiocese of Philadelphia’s Commission on Racial Healing, the free performance will feature more than 100 singers from the five-county archdiocesan area, with pieces to be sung in English, Spanish and Igbo, plus music from gospel and Filipino choral traditions.

The program will also feature remarks from Archbishop Nelson Pérez, who convened the racial healing commission in 2021, and Father Stephen Thorne, who coordinates the group under Philadelphia Auxiliary Bishop John McIntyre.

Joining Father Thorne in planning the concert were Sister of the Blessed Sacrament Lynn Marie Ralph, program coordinator for the archdiocesan Office for Black Catholics, and commission member Marcelle McGuirk, a soprano soloist for the archdiocesan and cathedral choirs.

The concert extends the work of the  commission – whose members represent Black, White, Asia and Latino communities — in a way that “(makes) history on so many levels,” said Dorsey.

The show’s format itself defies convention: rather than simply showcase their best numbers, the concert’s performers set out to learn each other’s music.

“We’ve seen a variety of situations where cultures come together, and everybody sings their own piece – we kind of ‘pass the mic,’” said Angelini. “But what’s unique about this concert is that we are … singing the repertoire of each respective choir. It presents an opportunity … to embrace community in a different way.”

The process has been a challenging one, the directors admitted.

For example, African music relies on “lots of drums and flute,” said Orji. “Sometimes, when you put a lot of instrumentation in your songs, a lot of bass and drums, people might say, ‘It’s too noisy.’ … But we have to learn to appreciate each other’s culture. … It’s for the glory of God.”

“It’s very complex,” said Thillet. “Music from the Caribbean is very syncopated. … You really need to put yourself in it, enjoy it and make it yours. … That’s crucial; that’s when things become wonderful” — and somewhat terrifying, added Angelini.

During rehearsals of a gospel piece, Angelini said she and her fellow singers, accustomed to rigorously following musical scores, were momentarily intimidated during a 16-measure passage that required improvisation.

“(Gospel choir members) started riffing, having a ball, and we were all frozen, thinking, ‘What are we supposed to do?’” she recalled. “But it was an opportunity to just kind of proclaim love for God and praise in a very different way, and it was exciting.”

Performers were determined to master the new material, said Uduma and Orji.

“It took us almost two hours to make sure everyone had the same pronunciation of the Nigerian Igbo language,” Uduma said. “When we all came together, I felt like we were trying to sing as one.”

Focusing on divine worship, rather than mere technical execution, has made for real harmony, said the directors.

The concert’s original compositions are all drawn from Scripture: Orji will perform her newly written “Taa bu ubochi ahu onye nwa yi mere,” based on Psalm 118, while Angelini, Dorsey and Thillet will debut a work based on Psalm 61.

“I’ve done collaborations, including one with a gospel rapper, but I’ve never done one so intense as with Damaris and Charlene,” said Dorsey. “It was almost as if we had a bonding moment. … I feel like we’re all sisters in Christ now.”

Concert directors hope attendees experience the same sense of connection, especially since “a lot of people out there are hurting from racial tension, living in fear,” said Dorsey.

“May is the month of our Blessed Mother, and we have five women (music directors),” she said. “Our Lady is telling us a message. You have to have women in the house to promote the love and unity (needed) for the whole world to progress.”

“We’re modeling a new beginning, and it’s time for that,” said Thillet. “This will be a transformative concert to bring people closer, united as one, as the body of Christ.”

The Trinity is the perfect pattern for drawing distinct groups into an authentic community, keeping them “united no matter our color,” said Orji.

And even after the last notes from the concert have fallen silent, Angelini hopes attendees “walk away feeling that anything is possible.”

Racial healing “takes work, and there is work to be done,” she said. “And this is a beautiful beginning.”

“We Find Hope in You: A Concert for Racial Healing,” sponsored by the Archdiocese of Philadelphia Commission on Racial Healing, will take place May 15 at 3 p.m. at the Cathedral Basilica of SS. Peter and Paul. Admission is free; a freewill offering will be collected. For more information, visit the concert’s event links on Facebook, available in both English and Spanish.

PREVIOUS: STREAM Expo showcases ‘everything we learn,’ including faith