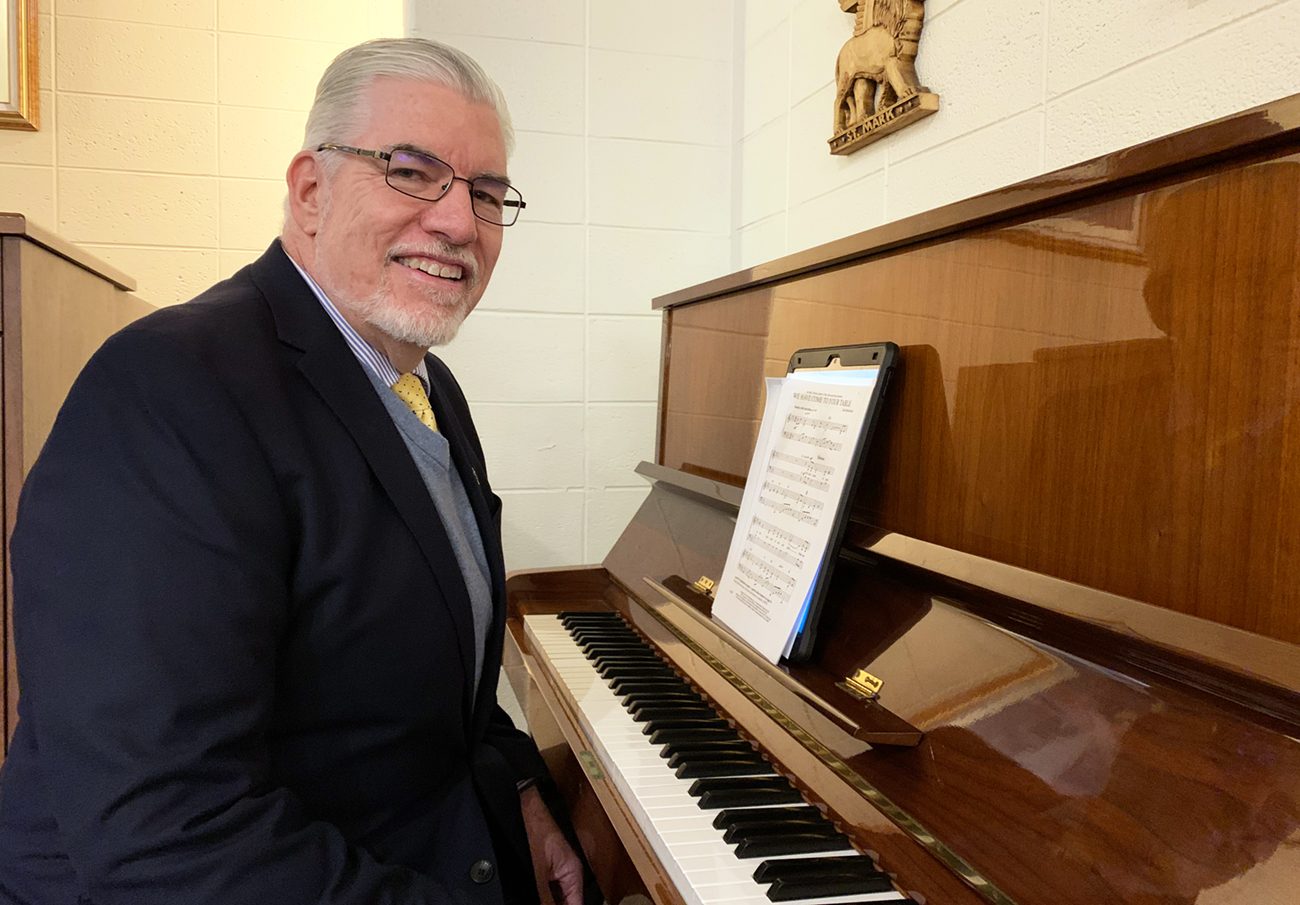 For his daughter's wedding, William Guy set church teaching on marriage to music, thanks in part to a homily by permanent Deacon Bill Moser, a fellow parishioner at St. William in Philadelphia. (Gina Christian)

With wedding season in full swing, Franz Schubert’s “Ave Maria” and other bridal classics are echoing throughout area churches.

But when his daughter Megan got engaged, William Guy – a member of St. William Parish in Philadelphia – sat down at the piano to write his own song for the nuptial Mass of his “little sweetie.”

And in the process, the father of five found poetic inspiration in some unexpected sources: a Sunday homily and the Catechism of the Catholic Church.

The result was “This Covenant of Love,” a gentle ballad that sets the profound Catholic theology of marriage to melody.

“Marriage is a sacrament, an outward sign instituted by Christ to give grace,” said Guy. “It’s the covenant, the mystery of the Trinity – God the Father, God the Son, God the Holy Spirit in union. I get tearful talking about it.”

Church teaching defines marriage as a “covenant by which a man and a woman form with each other an intimate communion of life and love,” a bond designed for “the good of the couple as well as the generation and education of children” (Catechism of the Catholic Church, 1660).

At the same time, the sacrament “signifies the union of Christ and the church” (Catechism, 1661), since the church itself is “the bride of Christ” (Catechism 808; 796).

That aspect of the church’s nature had been the focus of a homily by Guy’s fellow St. William parishioner, permanent Deacon Bill Moser – and the reflections shaped the text of Guy’s composition.

(Listen to a performance of “This Covenant of Love” by William Guy.)

“Deacon Bill had rewritten the wedding vows as coming from the church to Jesus,” said Guy. “And I incorporated that into this song.”

In fact, the entire third verse recounts the church promising herself to her Beloved:

Jesus, this day we take you as our Savior and our Lord
We promise to always be faithful to you,
In good times and bad, in sickness and health.
We vow to love and honor you all of our days,
Knowing even death shall not keep us from you.

The sacrament of marriage assists the church in keeping her bridal vows: through their union, married couples receive the grace to “help one another to attain holiness” (Catechism 1641; Lumen Gentium 11, 2).

Guy said he and his wife Caroline, now married 31 years, are making sure “(each) other gets to heaven,” having embarked on a journey that began with a first date on the feast of St. Joseph.

“Caroline had just finished a novena where she was praying for a husband,” he said. “And then I called her a few days after that.”

More than three decades of married life later, Guy said his “daily prayer … is (to) be a manifestation of God’s love” for his wife.

“I pray to God to love more and to be selfless, not selfish,” he said.

“I’ve joked with people that marriage to my wife is going to get me to heaven because she is my greatest blessing but also sometimes my greatest penance,” he laughed.

Guy said his daughter “didn’t hear the song or see it” until the day of her wedding — which took place on the same date as her parents’ first outing — at St. Agatha-St. James Parish in Philadelphia.

Having received special permission from the celebrant, Guy performed the piece after holy Communion, as the newly married couple honored Mary.

The song was a hit, he said.

“A lot of people came up to me later and said they really liked it, and when I told them I wrote it, the tears came,” Guy said.

“I wrote a song 31 years ago and played it at my wedding reception,” said Guy. “It was for Caroline, called ‘An Answer to a Prayer.’” 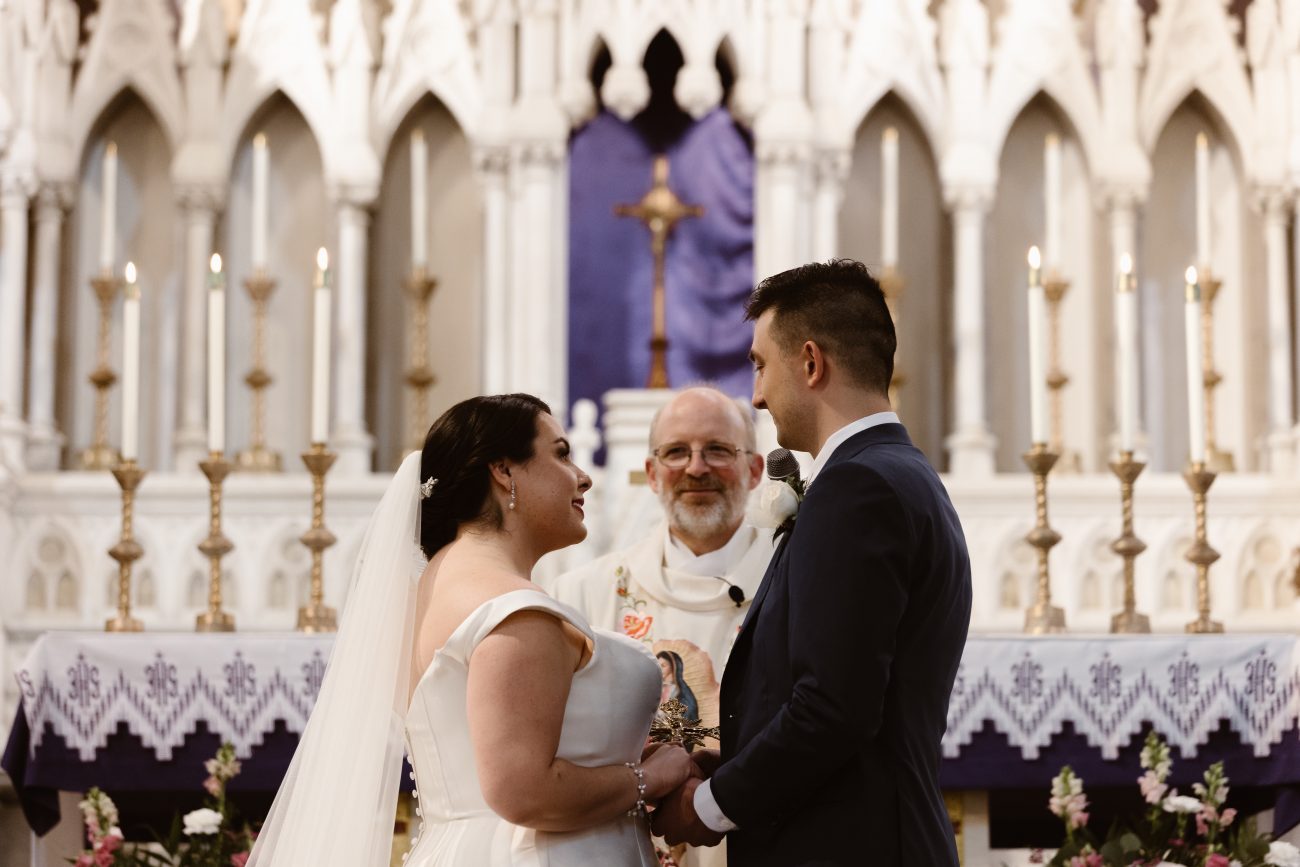 William Guy reflected on the theology of marriage in a song he wrote for the wedding of his daughter Megan at St. Agatha-St. James Parish in Philadelphia. (Courtesy of William Guy)

NEXT: Six new priests followed Jesus call in their hearts to the altar