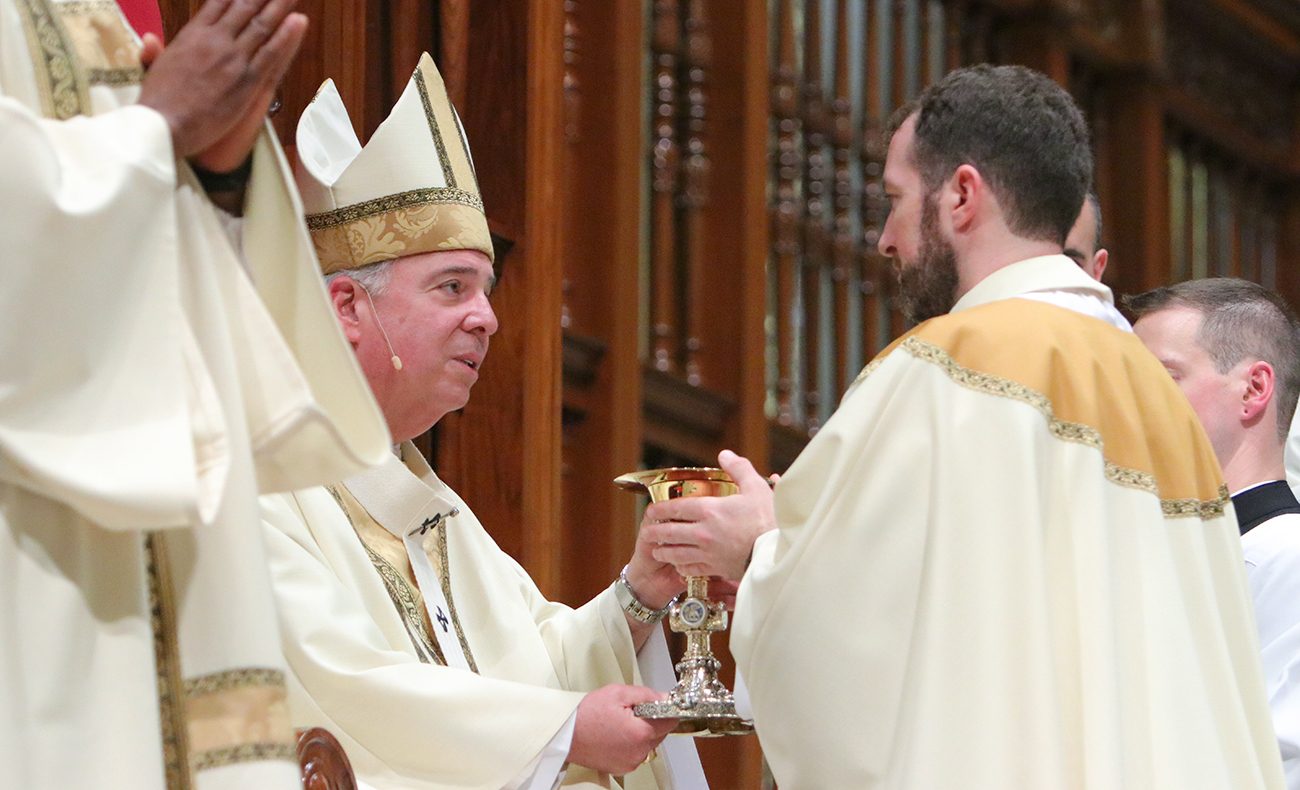 During the ordination rite, Archbishop Nelson Perez hands the chalice and paten for the celebration of the Eucharist to newly ordained Father Henry Graebe. (Photo by Sarah Webb)

“Never doubt that voice that you heard within your heart years ago,” Archbishop Nelson Perez told the six new priests he ordained for the Archdiocese of Philadelphia Saturday, May 21 in the Cathedral Basilica of SS. Peter and Paul.

The cathedral basilica was filled nearly to its capacity of approximately 1,500 worshipers, including the many family members and friends of the new priests seated in the front pews.

(See an extensive photo gallery from the ordination Mass.)

Kathy Auletta, mother of Father Andrew, described her son and his five fellow classmates as “reaching out to people’s hearts with compassion” through their vocations.

“The world is getting tumultuous,” she lamented. “People need guidance and love. They need to know the path for peace” through the Catholic faith, she said.

“It’s a blessing having not one, but two sons who are priests,” said Henry Graebe Sr., father of Father Henry Graebe and his older brother Father Brian Graebe, who has been a priest for 11 years and is a pastor in the Archdiocese of New York.

“They’ll be in competition to say Mass when they both come home to visit,” he said, smiling.

Having raised two sons who became priests, Graebe Sr. and his wife Alice credit their family and faith traditions, as well as Catholic education.

“Always making Mass a priority, no matter what else was going on” was key, said Alice Graebe, “as well as family and holiday celebrations.”

Father Keith Chylinksi, who becomes the rector of St. Charles Seminary on July 1, credits prayer, faith and support of vocations by families for the six ordinations in the archdiocese this year, and the expected seven ordinations next year.

Father Chylinksi invites Catholics in the archdiocese to take part in a new program, “Philly Adoration for Vocations,” launched this year on March 3, the feast of St. Katharine Drexel.  Adorers are invited to spend an hour or more before the Blessed Sacrament on Thursdays between 9 a.m. and 5 p.m. in the Sacred Heart Chapel at the seminary.

The Rite of Ordination of Priests opened with the hymn, “Alleluia! Sing to Jesus,” as 13 members of the Knights of Columbus Fourth Degree Color Corps processed up the main aisle of the basilica and raised their swords in salute.

Many St. Charles seminarians followed, the last of which were the six ordinandi (candidates for ordination), about 60 priests from the archdiocese, auxiliary archbishops and Archbishop Perez.

“You could have done anything else with your life, followed any path,” the archbishop told the six ordinandi during his homily, “but you were docile and obedient to the voice of God deep in your hearts.”

The archbishop thanked their parents for the generosity of offering their sons in “service to the church around the world.”

Archbishop Perez noted that the six new priests will join hundreds of fellow Philadelphia priests in service in the archdiocese. He recommended that they “stay close to the Lord in the Eucharist” and “talk to him as your Lord.” He reminded them that the same Lord who called them to the priesthood also called St. Peter, referencing the earlier reading of the Gospel of John, 21:15-17.

“Stay close to your family and friends, they will sustain you” the archbishop said, adding, “and stay close to the Blessed Mother. She will protect you and guide you.”

Following his homily and the promise of the ordinandi to undertake the office of the priesthood, the rite continued with the laying on of hands, where Archbishop Perez first laid his hands on the head of each candidate, followed by the other archdiocesan priests present.

Archbishop Perez then extended his hands over the candidates in the prayer of ordination. The laying on of hands and the prayer together constitute the essential elements of the sacrament of holy orders.

Each new priest was vested in a stole and chasuble, the liturgical attire of a priest, by a priest colleague who is particularly close to the newly ordained, followed by the anointing of hands with the oil of sacred chrism. 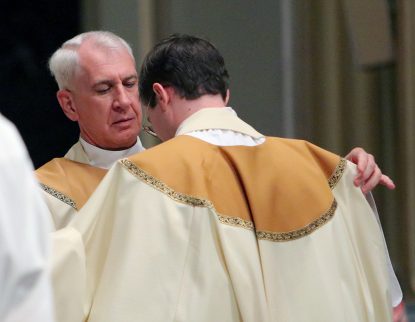 Father Philip Lowe, left, helps to vest newly ordained Father Andrew Lane with the vestments of the priest, a stole and chasuble.

Father Henry Graebe was vested by his spiritual director in the seminary, Father Herbert J. Sperger.

Father Ryan Nguyen was vested by Father Livinus Ugochukwu, currently in residence at Good Shepherd Parish in Camp Hill, Pa., who was serving African immigrant communities in Philadelphia until last year. The two became friends when Father Nguyen was discerning the priesthood and asked to join Father Ugochukwu during home and hospital visits to help with his discernment.

Mass ended with the six new priests giving their first blessings to all in attendance, which included those present as well as numerous participants watching the Mass via livestream.

Liturgical music was provided throughout Mass by the Cathedral Basilica Choir, under the direction of Charlene Angelini, with organist Mark Loria.

A luncheon followed afterward at St. Charles Borromeo Seminary in Wynnewood for the six new priests, family members and guests.

Each new priest celebrated his first Mass on Sunday, May 22. They follow the tradition of the Archdiocese of Philadelphia that newly ordained priests visit their home parish or parishes where they served as seminarians to celebrate Mass, beginning the first weekend after the ordination.