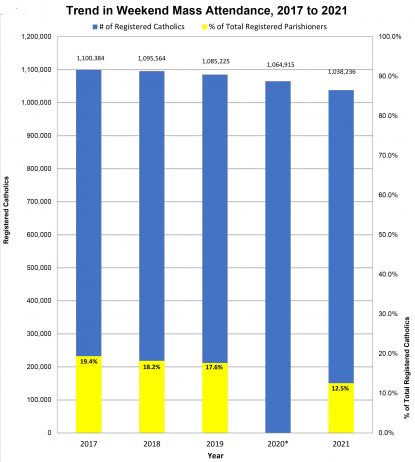 A graphic by the archdiocesan Office of Parish Service and Support shows the October Count for Mass attendance in the Philadelphia Archdiocese in 2021 compared to several previous years.

The results are in for the latest count of Mass attendance in the Archdiocese of Philadelphia, and they show a sobering though incomplete picture of who is — and is not — coming to church on Sundays.

The “October Count” is a head count of all people attending Mass each week in that month because it does not include holidays or major Catholic solemnities like Christmas and Easter, skewing the count higher or lower. It is thus roughly representative of Mass attendance in the 214 parishes of the archdiocese.

The census for 2021 showed 129,990 people worshipped at 861 Masses each week in October, according to information by the archdiocesan Office for Parish Service and Support.

That figure represents a significant drop in attendance from previous years, as does the percentage of registered Catholics attending Mass, 12.5%. That is about half the percentage it was in 2008, at 24%.

One caveat in making recent comparisons is the fact that in 2020 there was no October Count due to the COVID-19 pandemic, when restrictions on in-person Mass attendance occurred that spring and the obligation to attend in person only was reinstated in August 2021.

During that time many Catholics stayed home and watched the Mass livestreamed from their parish or another church. In some cases this remains the practice of people who rely on that experience for continuing health reasons, or simply for their preference.

The number of people who viewed the Mass online in October 2021 and in the present is unknown.

Another factor is the total registered population of the archdiocese — not counting those Catholics who attend Mass but are not registered in the parish they attend — dropped from 1.1 million Catholics in 2017 to 1.038 million in 2021.

(Read a commentary on the 2021 October Count by Evelyn Brannan Tarpey of the Office for Parish Service and Support.)

One bright spot of the most recent figures is the continuing sign of cultural diversity in the church. Of the 861 Masses celebrated, 49 were in Spanish and 770 in English. An additional 42 Masses were celebrated in 21 other languages reflecting people’s homeland, including a new entry this year: Q’eqChi for those from Central America.

After the Spanish language, Vietnamese had the most Masses offered, at eight.

While the October Count shows a decrease in attendance in all languages, the drop was most severe for Masses in English. There were 58,114 fewer attendees and 62 fewer Masses offered weekly in 2021 from 2019.

The report from the Parish Services Office concludes with a study of the times that Catholics go to Mass in person. Not surprisingly, Sunday morning remains the norm, with 61% of Catholics attending then, and 8 a.m. the most popular, followed by 9 and 10 a.m.

The Saturday evening vigil Mass comes in at 24% of Masses celebrated, with 5 p.m. the leading time.

Currently the archdiocese is compiling a new census count of Mass attendance in parishes, conducted on a voluntary basis, during the month of April 2022.

Administrators hope to assess changes in attendance since last October now that people are joining more social activities as concerns over COVID infection wane, activities including worship in person. 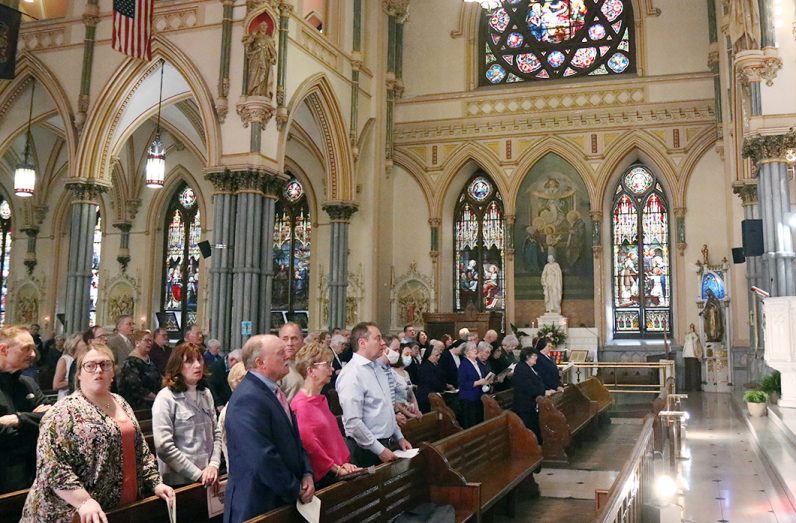 Worshippers gather for Mass on April 30, 2022 at St. John the Baptist Parish in Philadelphia’s Manayunk section to celebrate the 190th anniversary of the parish’s founding. (Photo by Sarah Webb)

NEXT: Novena to lead virtual pilgrimage for peace in Ukraine