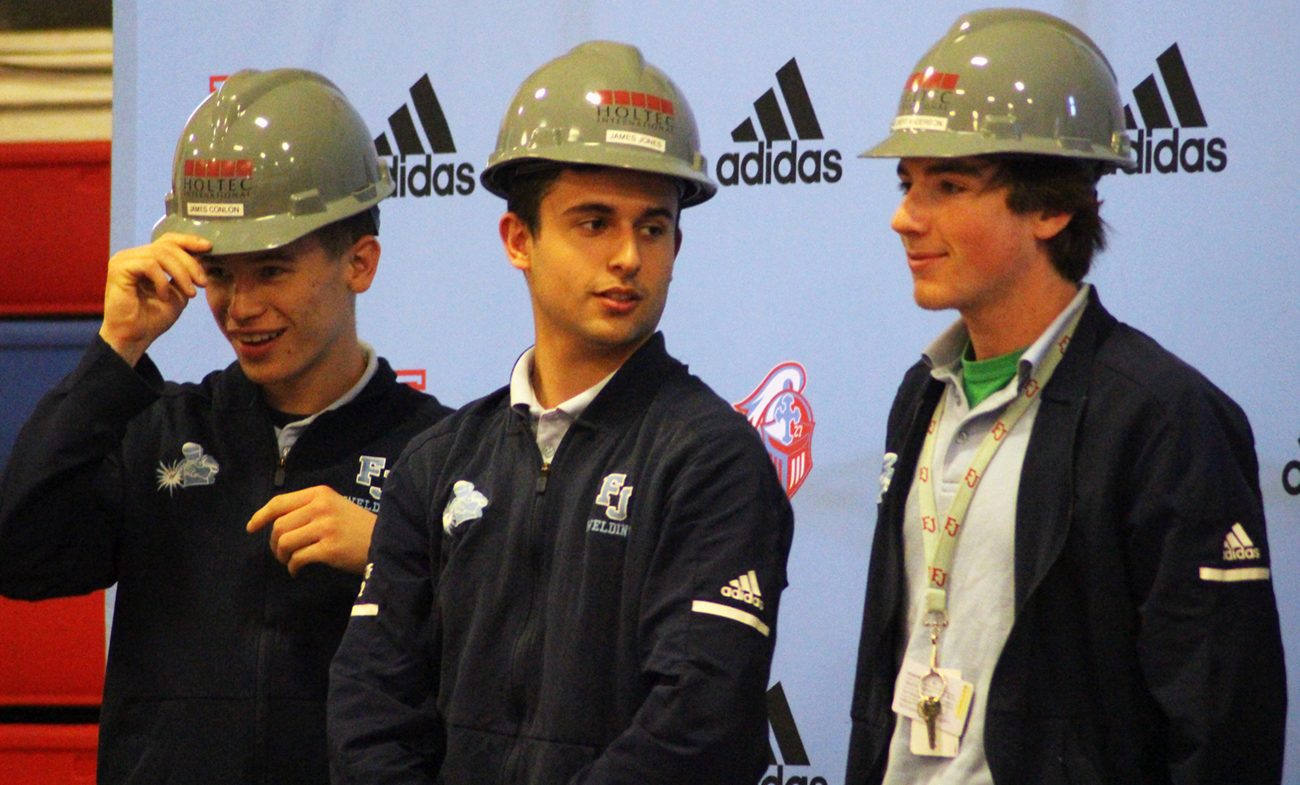 Seniors from the welding program at Father Judge High School sport hard hats from Holtec International, one of several firms that extended offers to the school's first class of welders during a May 10 celebration ceremony. (Gina Christian)

More than 30 archdiocesan Catholic high school seniors are trading their tassels for hardhats – and literally taking up their torches to blaze a new path after graduation.

On May 10, Father Judge High School in Northeast Philadelphia saluted the first cohort of students to complete its welding program.

Five students had passed an industry welding test that uses x-rays to detect defects in workmanship – and the teens received a clean bill on their first try, said Williams.

Launched during the 2019-2020 academic year, the three-year welding curriculum is the first of its kind among archdiocesan high schools as part of a broad career and technical education (CTE) initiative at Father Judge. 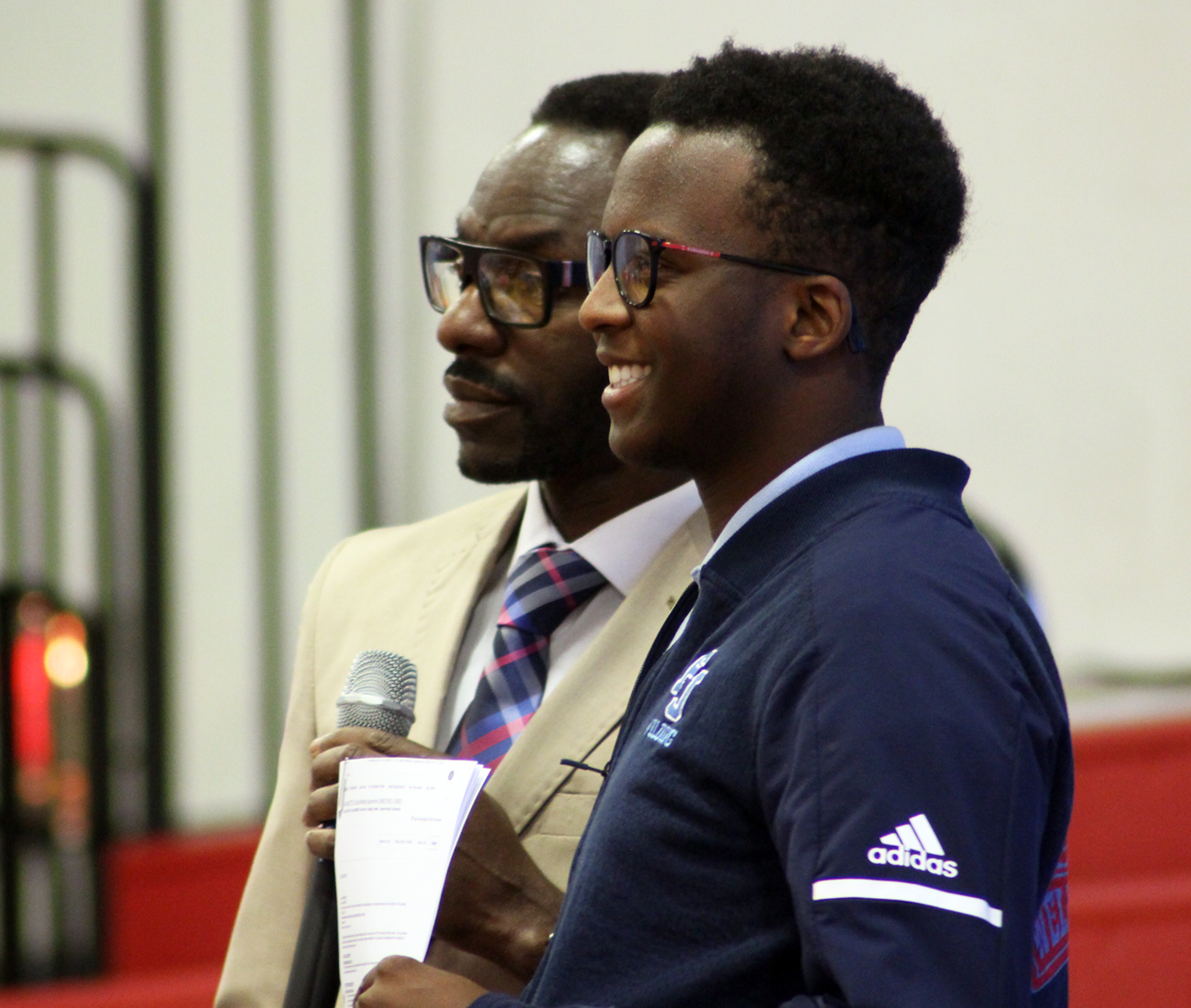 Father Judge High School welding instructor Joe Williams, seen with one of his graduating students at a May 10 celebration hosted by the school, said the program he heads up “changes lives.” (Gina Christian)

The welding program became a reality thanks to grants from the Ambassador’s Fund for Catholic Education and the Connelly Foundation, which provided a combined $350,000, and a $1.5 million Pennsylvania State Redevelopment Assistance Capital Program (RACP) grant to the Friends of Father Judge High School, which has supported the expansion of both the welding lab and the school’s Father Brisson Academic Excellence Center.

The instruction made possible by those funds “will change lives” by “giving careers to (these) young men,” said Williams.

Many of the job opportunities extended at the gathering feature starting salaries of $75,000, he said.

For their part, employers are eager to recruit trained professionals at an early age, said Rick Burger, plant foreman of Sea Box and a graduate of Father Judge.

“The biggest problem we have is getting the young people,” he said. “Kids today just don’t want to do this type of physical labor.”

Yet as its operations have rapidly expanded, Sea Box has had to turn to temporary workers to fill demand for orders, he said. 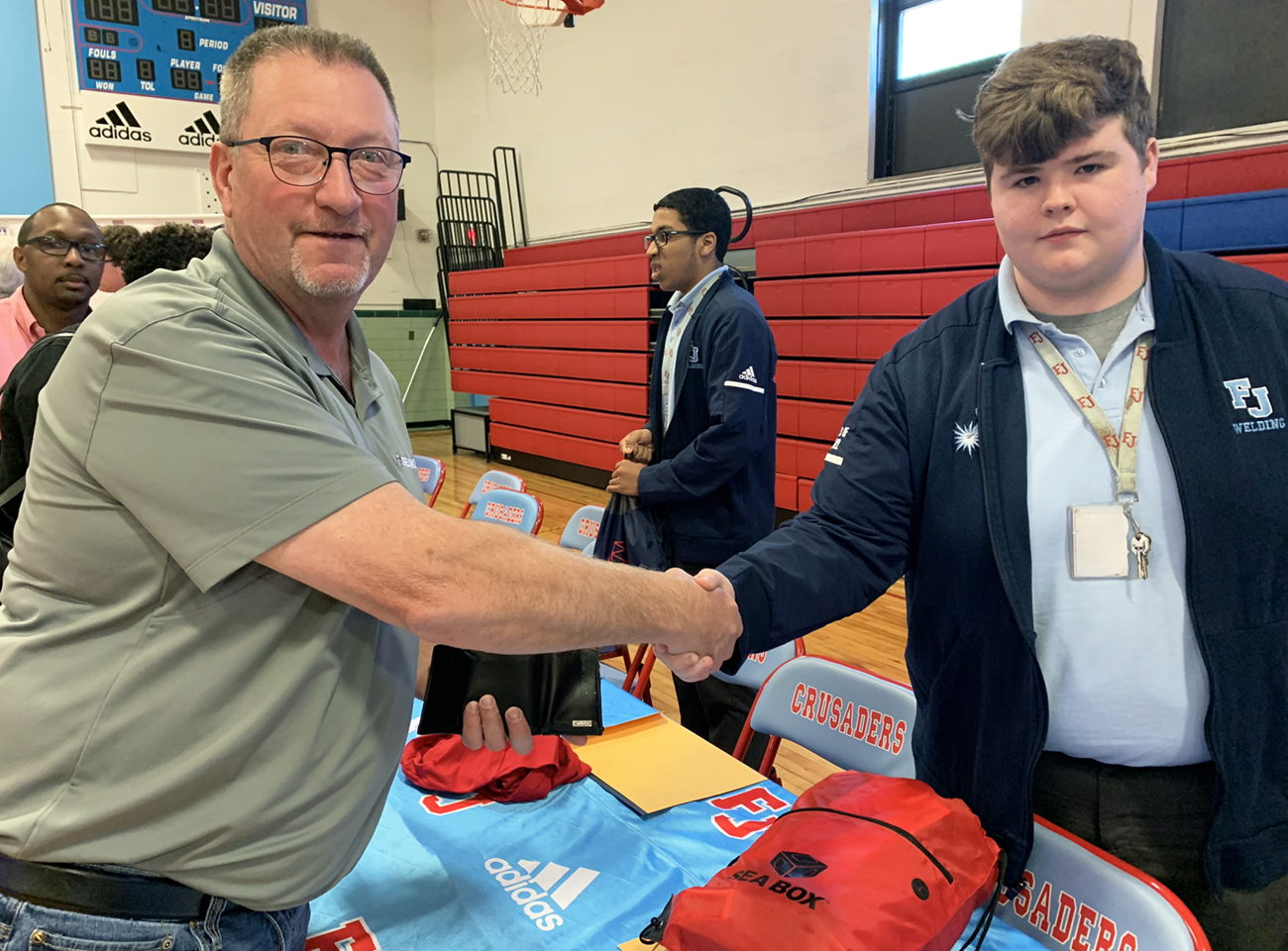 “In the last five years, we’ve probably hired over 15 of those temps, and two of them have become supervisors,” said Burger. “There’s a hundred people applying for a single engineering job, but nobody is applying for these jobs. I tell young kids all the time that 10 years from now, they’re going to be the ones making the most money.”

But forging a welding career takes discipline, hard work and a commitment to excellence, stressed Williams, who said his instruction was rigorous by design.

“Only 95 and up is an A (grade),” he said. “There are no participation awards for life when you’re an adult.”

Student Joseph Gillespie admitted he “didn’t know that much about welding” when he entered the program, and his first experience in the workshop was a bit of a shock.

“The first time I started welding, I got scared immediately,” he said. “I gave my torch to the person next to me and said, ‘Here, you can go now.’”

After three years, Gillespie said his favorite types of welding are MIG and flux core.

He’ll get plenty of practice in both, having signed on to Sea Box – and Father Judge president Brian Patrick King said he’s “excited” for Gillespie and all the welding students.

“The fact these guys get to go out to these job offerings with their God-given talents and earn a great wage – I’m happy for them,” said King, who graduated from Father Judge in 1997. “It’s an opportunity these kids have that wasn’t here when I was in school. I’m kind of jealous.”