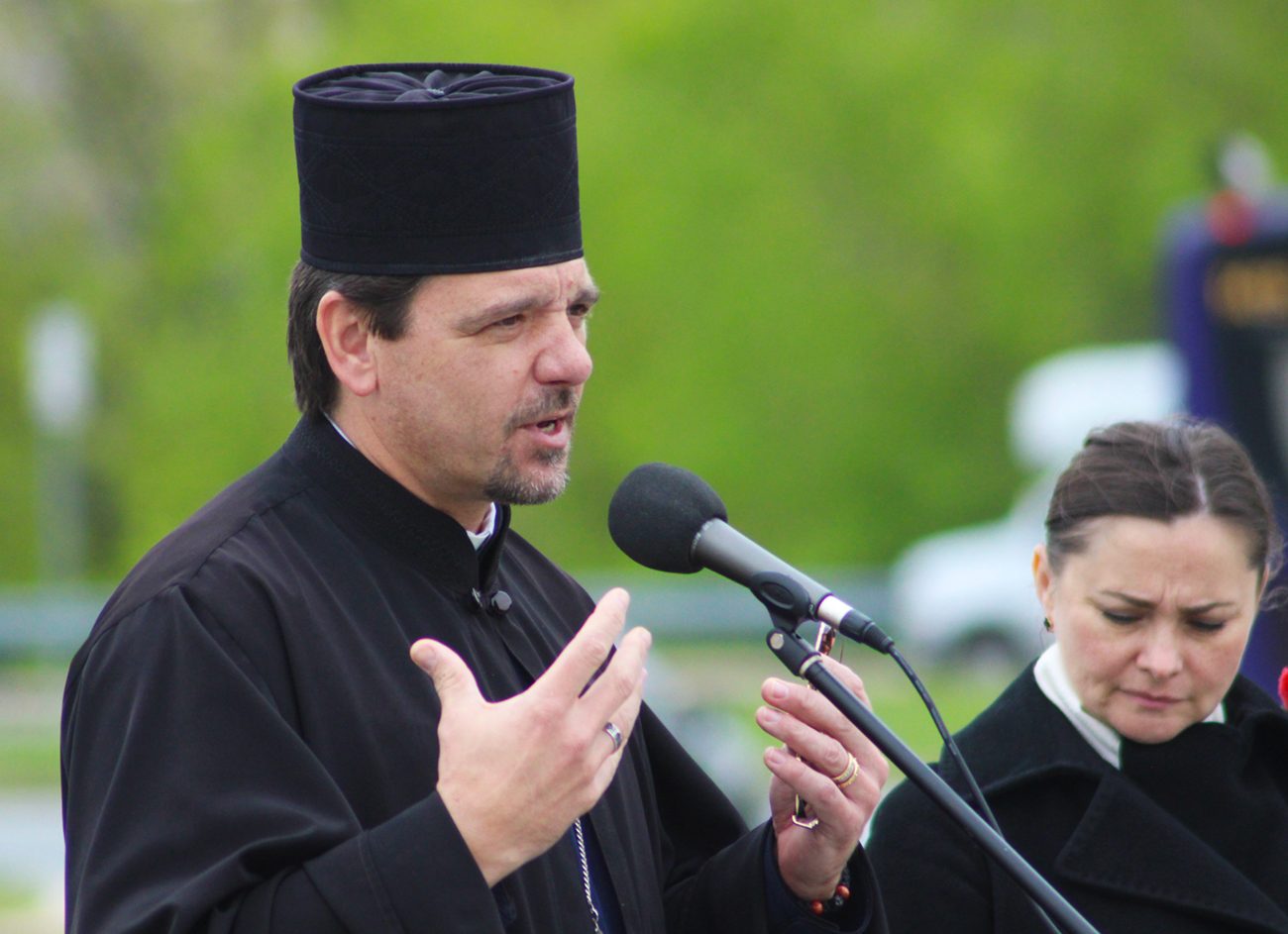 With the Russian invasion of Ukraine now in its third month, local Ukrainian Catholic clergy are urging people of goodwill not to “get used to the war,” but to instead redouble prayer and relief efforts.

“We cannot just stop; we have to say to the world that … the war is happening in Ukraine now,” said Ukrainian Catholic priest Father Roman Pitula, rector of the Ukrainian Catholic Cathedral of the Immaculate Conception in Philadelphia.

Father Pitula was one of several speakers at a May 8 “Day of Reconciliation and Remembrance” held at the steps of the Philadelphia Museum of Art. Organized by Iryna Mazur, honorary consul of Ukraine in Philadelphia, and City Councilman David Oh, the afternoon vigil commemorated those who have died since Russia launched its Feb. 24 assault on Ukraine.

The invasion, which has killed thousands and displaced close to 14 million, followed Russia’s 2014 military occupation and attempted annexation of Ukraine’s Crimean Peninsula, and the backing of separatist states in Ukraine’s Donetsk and Luhansk regions.

Discoveries of hundreds of civilian atrocities following the latest Russian occupation – including mass graves, summary executions and survivor accounts of rape and torture – have prompted a number of internationally-led criminal investigations. The nations of Estonia, Latvia and Lithuania have formally condemned the Russian campaign as genocide, while Ukraine President Volodymyr Zelensky has called for a Nuremberg-style tribunal to hold perpetrators accountable.

Sunday’s rally coincided with Victory in Europe (VE) Day, which marked the date Germany unconditionally surrendered to Allied forces in 1945, thereby ending World War II in Europe. This year’s Russian observance of VE Day on May 9 was widely expected to prompt further escalation of the conflict, as Russian president Vladimir Putin seeks to marshal sustained support for the invasion.

“I don’t think many of us will sleep too well tonight,” admitted Mazur. 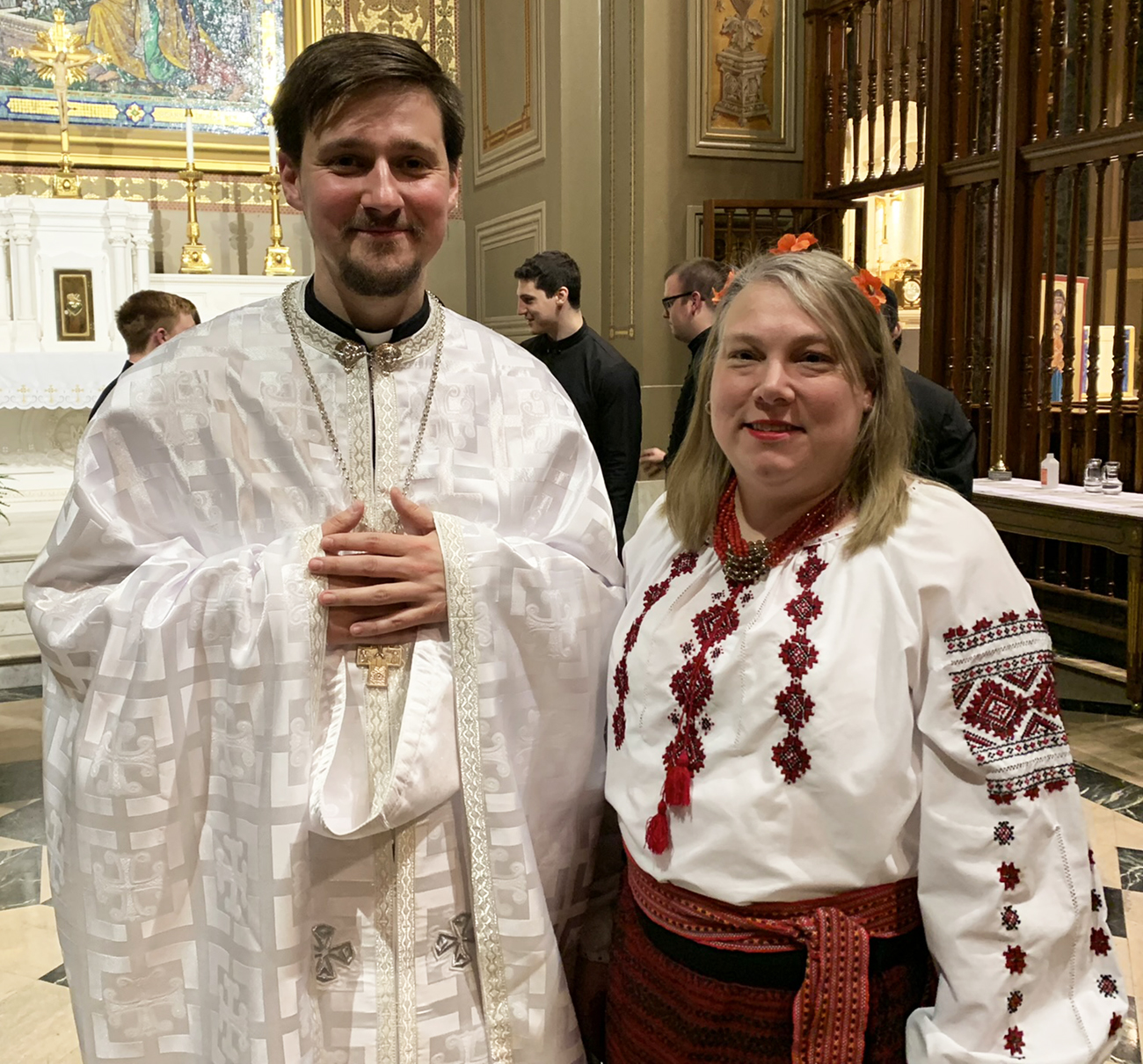 Ukrainian Catholic priest Father Volodymyr Radko stands with a worshipper in traditional Ukrainian attire after a May 8 Divine Liturgy celebrated by Father Radko at the Cathedral Basilica of SS. Peter and Paul. (Gina Christian)

“For something like this to happen in the middle of Europe in the 21st century – nobody would have believed it could,” he said. “But it is happening.”

Prayer, especially to Mary, is essential to Ukraine’s defense – and always has been, said Father Pitula.

“Ukraine was placed under the protection of Mary, the Mother of God, in the 11th century by Yaroslav Mudryj (Yaroslav the Wise),” grand prince of Kyiv from 1019 to 1054, he said. “The Mother of God helps us.”

Ukrainian clergy have continued to seek Mary’s aid ever since. In the 20th century, Patriarch Joseph Slipyj dedicated Ukraine to the Mother of God in Lourdes in 1970, and his successor, Cardinal Myroslav Lubachivsky, did the same in 1984 and in 1996.

Although Ukraine has been firmly entrusted to Mary, faithful must persist in “(asking) God to help us and to bless us,” said Father Pitula.

The same call was echoed later on Sunday evening at the Cathedal Basilica of SS. Peter and Paul, where Ukrainian Catholic priest Father Volodymyr Radko was the principal celebrant at a Divine Liturgy of St. John Chrysostom. Also present were Archbishop Gudziak, Cathedral rector Father Dennis Gill, seminarians from St. Charles Borromeo Seminary, from which Father Radko graduated, and some 200 faithful.

“Thank you for your prayers for Ukraine, and for keeping those who are besieged – and all the displaced – in your prayers,” said Father Radko, who was ordained in his native Ukraine just days before the invasion, and only recently returned to his pastoral assignment at the Ukrainian Catholic Archeparchy of Philadelphia, having been delayed due to the conflict.

“Unlike any other war, probably because of technology, we are able to observe the war in Ukraine day by day and (to) be caught up by the terrific horrors that had been inflicted upon Ukraine,” said homilist Father Gill. “We pray for peace, for the end of the terror of war in Ukraine, and we pray for peace in our hearts.”

Both prayer and worship require diligence and endurance, said Sal Orosz of the St. Charles Borromeo Seminary Schola, which provided the musical accompaniment for the Divine Liturgy.

Given the use of repetition in the liturgy’s Byzantine chants, “it’s very easy to be singing ‘Christ is risen from the dead, trampling death by death,’ and to get tired of it and slow down,” said Orosz. “You’ve got to keep the energy and attention up. … If we’re not putting in the work, it’s not going to help people.”

Father Pitula stressed the same in his rally remarks, which he concluded by chanting “Khrystos Voskres” (“Christ is risen”).

“May God bless us all, and remember … don’t cease to pray, but pray to cease the war,” he said. 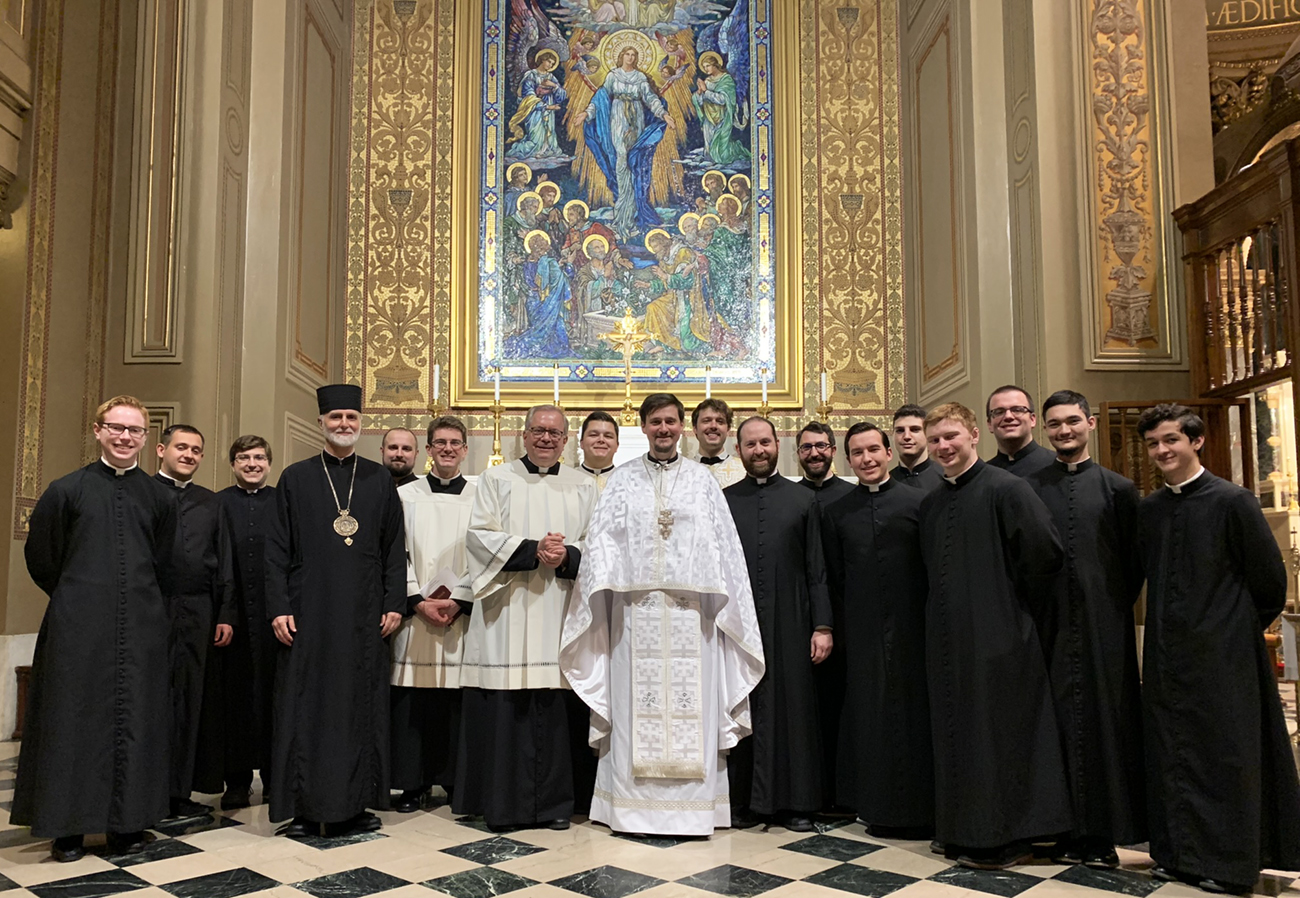