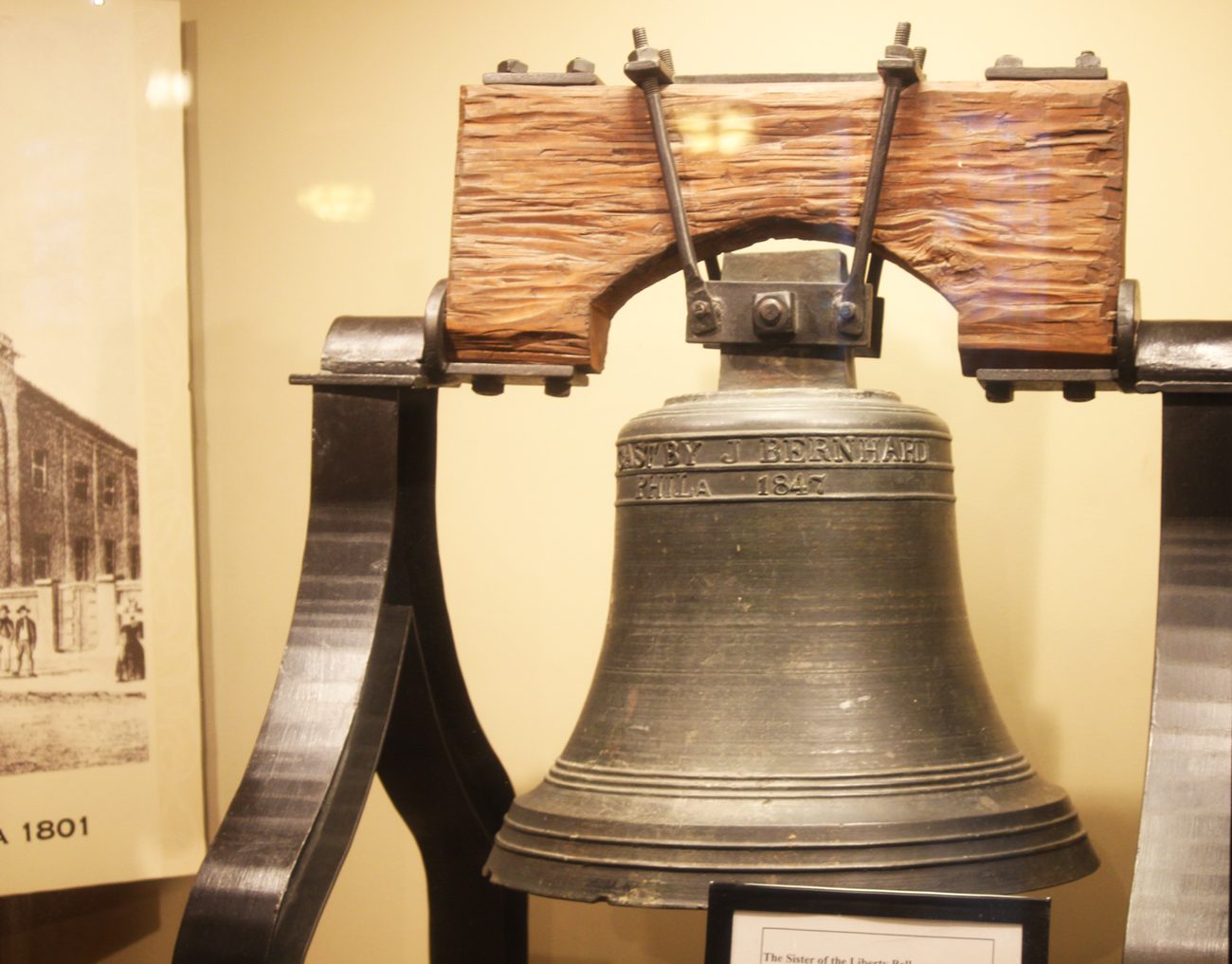 The Sister Bell, originally cast in larger form as a replacement for the cracked Liberty Bell, was blessed and returned to its historic home at St. Augustine Parish in Philadelphia, May 7. (Gina Christian)

An iconic bell symbolizing religious liberty has returned to its home parish, summoning all to safeguard the “sacred right” to worship.

Philadelphia Auxiliary Bishop Timothy Senior presided over a May 7 prayer service at St. Augustine Parish in the Old City neighborhood, where he blessed the Sister Bell — a 150-pound lesson in early American history, and a reminder that “the precious gift of religious freedom … cannot be taken for granted,” said the bishop.

Members of the parish choir performed “Sound the Bell of Holy Freedom,” the official hymn of the 2015 World Meeting of Families, which took place in Philadelphia.

Written by Normand Gouin and Norbertine Father Andrew Ciferni, the song’s lyrics “call all nations of the earth,” and the Sister Bell’s story holds a powerful message not only for Americans, but for humanity, said Bishop Senior.

Originally cast in 1754 to replace the Liberty Bell, which had cracked upon its first testing, the Sister Bell hung in the shadow of its repaired (and later re-cracked) older sibling, tolling the hours at what later became Independence Hall.

In 1777, both bells were smuggled to Allentown to avoid seizure by invading British troops, and were returned to Philadelphia in 1778. About 40 years later, the city transferred the Sister Bell (also nicknamed “The Other One”) to the Augustinian clergy who served Old St. Augustine Parish, located at 4th and Vine Streets.

Amid a fierce surge in discrimination against Catholics and immigrants (particularly those from Ireland), the church was burned to the ground on May 8, 1844 by members of the Native American political party, often called the “Know-Nothings” for members’ secrecy regarding their affiliation and activities. 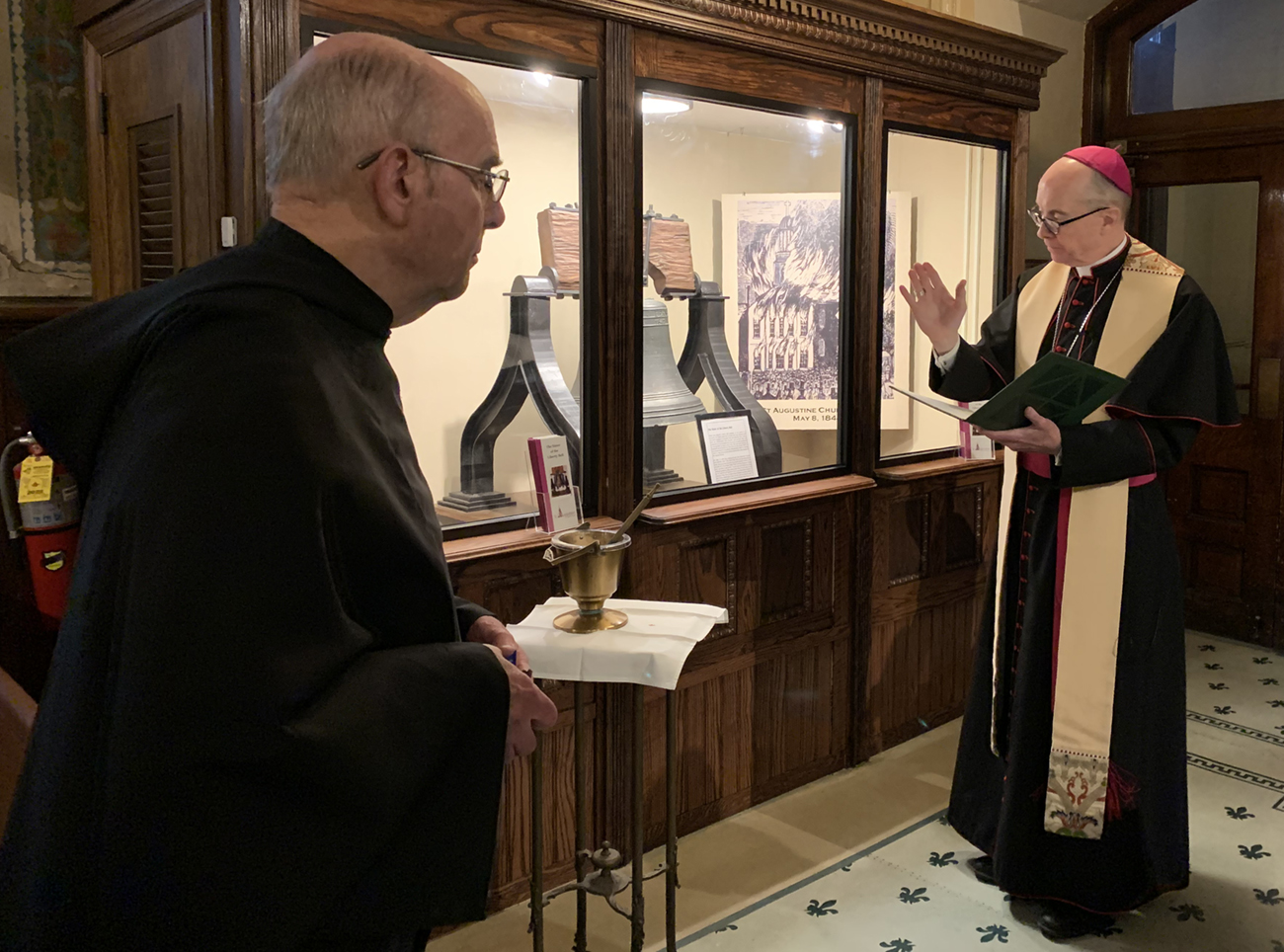 Pennsylvania was a hotbed for such sentiment: St. Michael Church on Second Street, a seminary and several private homes were destroyed along with St. Augustine amid the same three-day riot, and the violence flared again throughout the city in July 1844.

Following the May 1844 fire, the remaining shards of the Sister Bell were gathered and recast into its present form, which has spent the better part of the intervening years at Villanova University, with a 1917-1942 sojourn to St. Nicholas of Tolentine Parish in Jamaica, New York.

Though much smaller than the original, the refashioned Sister Bell speaks even more loudly, said Bishop Senior, who reflected on the biblical inscription found on both its predecessor and the Liberty Bell: “Proclaim liberty throughout all the land unto all the inhabitants thereof” (Leviticus 25:10, King James Version).

The verse itself was selected to commemorate the 50th anniversary of William Penn’s 1701 Charter of Privileges, which ensured religious liberty and self-government to Pennsylvanians, said the bishop.

The charter was affirmed when St. Augustine Parish successfully sued the city following the 1844 fire, and the funds awarded enabled the congregation to rebuild the present church – designed by Napoleon LeBrun, architect of the Cathedral Basilica of SS. Peter and Paul – in 1847.

More broadly, however, the passage from Leviticus — which references the Jubilee Year of ancient Israel, when debts were cancelled – recalls “the recognition that we’re all on a level playing field, since God created us in his image and likeness,” said Bishop Senior.

Human beings have been endowed with “(a) freedom given to us by God, (a) very precious right” to worship and to enjoy “a relationship with a God of love, who has given us life,” he said.

Churches such as St. Augustine, which Hess lauded as “a gem and a treasure” for its beauty, provide necessary and sacred spaces in which to exercise that privilege – but such rights can never be taken for granted, said Bishop Senior.

The Nativist riots of the 1840s served as a “frightening reminder” that “we must treasure and advocate for that freedom” in the face of religious suppression and persecution, he said.

Yet even when such freedoms are trampled, “the people who make up the church will never be destroyed,” said Squilla. “Even though it sometimes seems we’re going through troubling times, we as the people will stand up together and make this country a better place, just like we did right here at St. Augustine.”

Father Waters agreed, saying the Sister Bell – now housed in a custom display case in the church’s narthex – is a “concrete sign of the history and resiliency of our parish, and of freedom and liberty.” 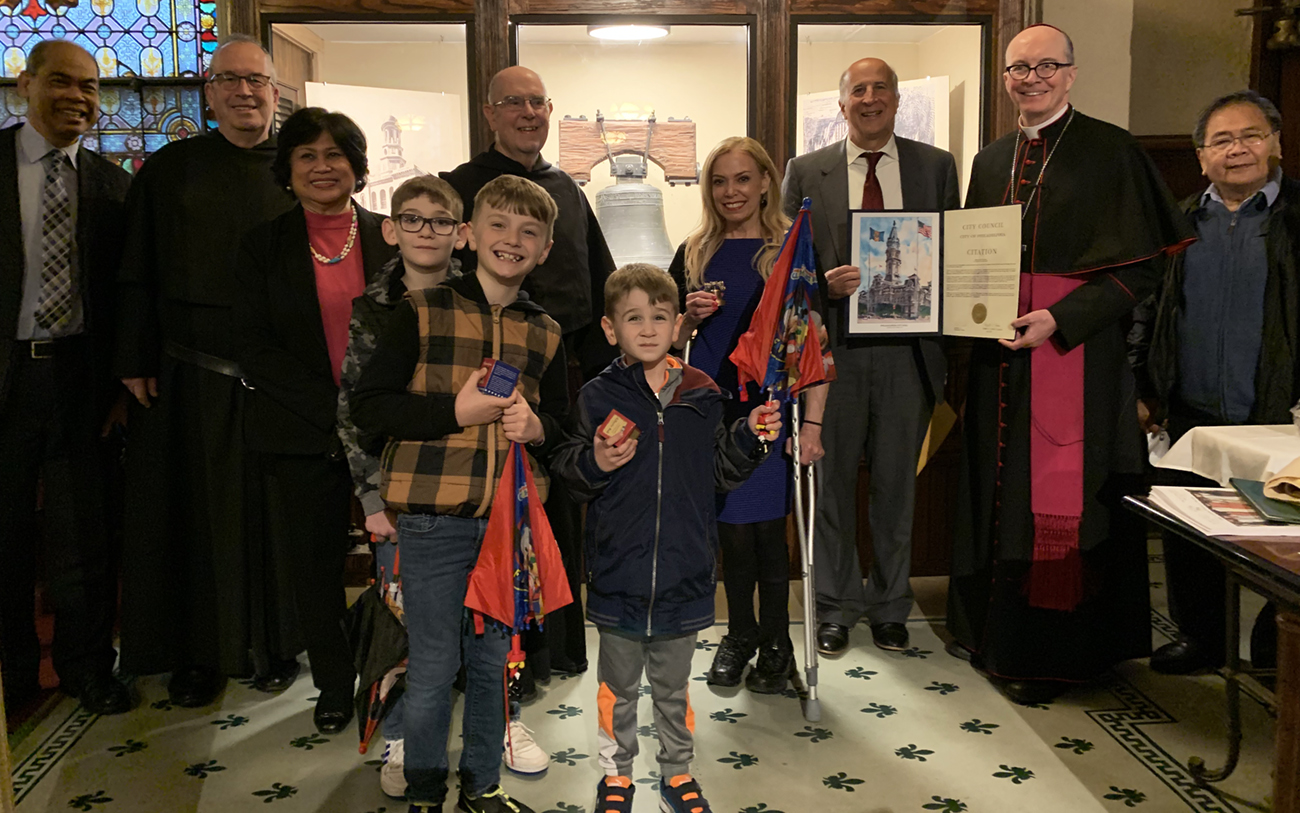 NEXT: Don’t get used to war in Ukraine, plead local Ukrainian Catholic clergy