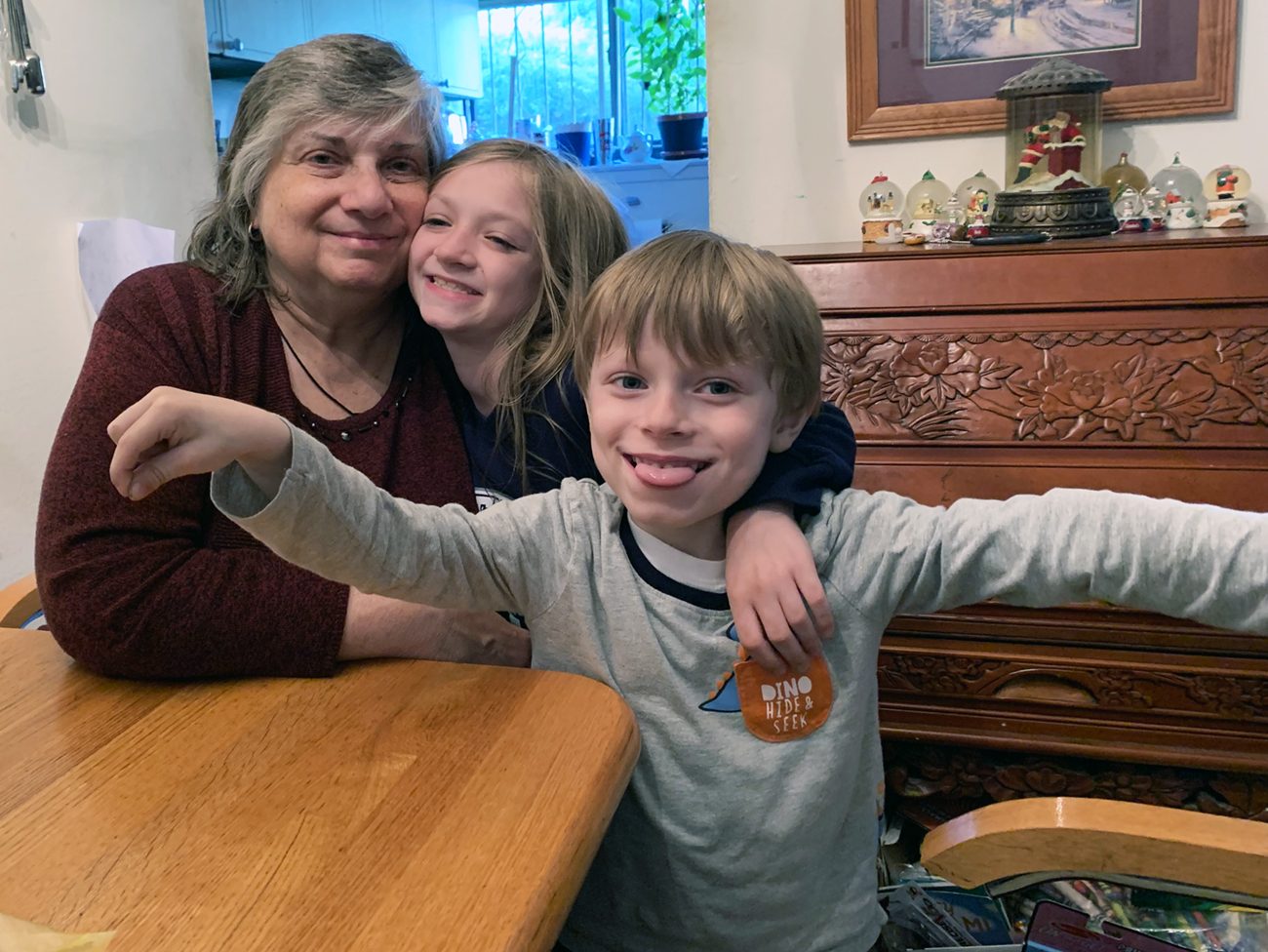 Nancy Kumor said her grandchildren Isabella and Caden, whom she adopted with the support of archdiocesan Catholic Social Services, have brought blessings, hard work and fun to her life. (Gina Christian)

At age 63, Nancy Kumor did what any grandmother might do: she bought a banjo.

The retired Northeast Philadelphia nurse also bought a keyboard and a guitar for the band she’s starting with eight-year-old granddaughter Isabella and grandson Caden, now four.

But the ensemble’s real harmony is music to the heart: thanks to the support of archdiocesan Catholic Social Services (CSS), Kumor has recently adopted the children.

“I thank God they’re here with me,” she said.

A second season of parenthood

Kumor’s journey to a second stint at parenthood has been an unexpected but increasingly common one. Due to her adult daughter’s medical and behavioral issues, Kumor opened her home to the children, under a kinship care arrangement supervised by Philadelphia’s Department of Human Services (DHS) and managed in part by Catholic Community Services (CCS), a community-based outreach of CSS serving several neighborhoods within Northeast Philadelphia.

In the process, Kumor joined an estimated 2.5 million grandparents who are the primary caretakers of their grandchildren, a statistic cited by Congress in 2018 when it established a federal advisory council for such individuals.

The U.S. Census of the following year found some 2.7 million of the nation’s children are being raised by grandparents or other relatives — families that coalesce around a number of challenges, including addiction, mental illness and incarceration.

Amid those issues, “there’s a big push … to find family members who are available to be permanent resources for kids,” said John Loughead, a case manager supervisor for CCS, which is presently handling cases involving just under 460 children.

Kinship care arrangements, which have come to replace orphanages and other congregate care settings, are widely viewed to offer kids more stability, safety and continuity with existing family relationships and traditions. Of CCS’s 215 active foster care cases, 65% are designated as kinship care.

But living indefinitely with grandparents and other relatives, even under agency-managed kinship care, isn’t a long-term solution for kids, said Loughead.

When full family reunification isn’t possible, the goal is “not to have them continuously in limbo for years on end in foster care,” he said. “We want to give them a sense of permanency so they can have a normal life.” 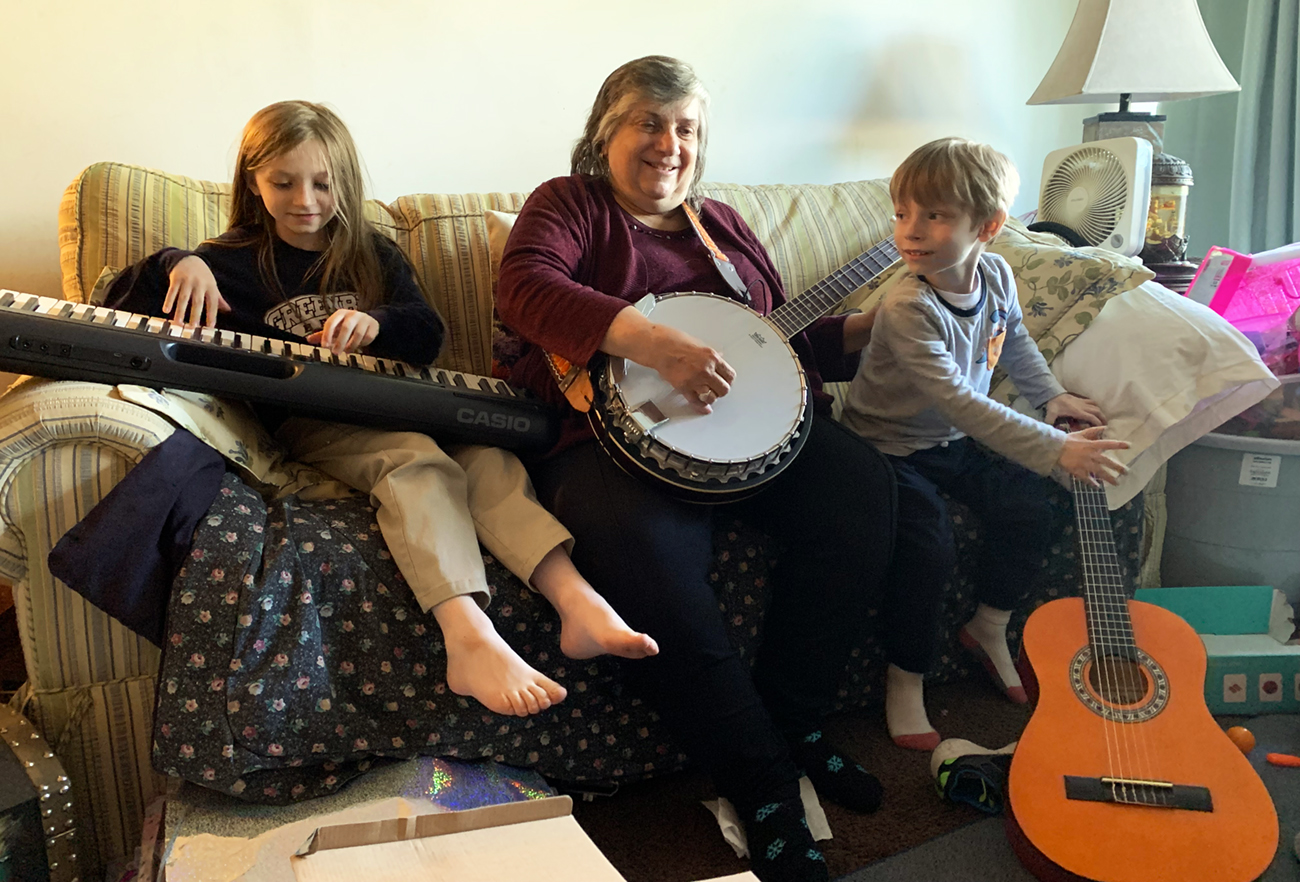 The Kumor family enjoys making its own music as part of what Nancy Kumor calls a homegrown “bluegrass band.” (Gina Christian)

“It gets to a point … where the judge makes a decision, looking at what progress the parents are making, and (determining) if it looks like reunification is still not realistic any time soon,” said Loughead. “Especially with younger children, (courts) look toward adoption as the first permanency choice.”

Kinship adoption in particular “preserves family ties, while achieving stability and permanency, which is vital to the well-being of children and youth,” said CCS director Teresa Thompson.

“When the kids came to me, I assumed it was going to be forever,” she said, noting that she can grant visitation rights to the children’s parents, who are working to maintain contact.

Making it work, while having fun

Initially, she took on double nursing shifts (and a babysitter) during weekends to clear her weekday schedule, but eventually opted for early retirement to devote herself to the children full-time.

Throughout both the kinship and adoption phases, CCS has been supportive, she said.

“They led me to a lot of resources I could use,” Kumor said. “Both of the kids had special interventions – Caden had physical and speech therapy, Isabella had occupational therapy – and CCS gave me all the information I needed to reach out to the people involved.”

In the process, CCS staff “never made me feel self-conscious; they made me feel part of the family,” said Kumor.

She’s also “networking in the school yard” to trade notes with “other grandparents who are raising their grandkids.”

Above all, faith in God sustains her as she navigates a new season of parenthood.

With the kids, Kumor’s world has expanded in unexpected ways.

“I used to wonder what it would be like to raise a boy, because I only had a daughter. Now I know,” she laughed.

Caden “likes to draw and to build things with blocks,” while organizing everything from candy to toys, said Kumor.

He follows his sister’s lead in “imaginating,” an exercise of running and make-believe invented by Isabella – who “wakes up talking and goes all day until her head hits the pillow, when she’s still talking,” Kumor said.

Naturally athletic, Isabella has begun dance lessons and recitals; for both siblings, swimming lessons are on the summer agenda, said their grandmother.

“I’m trying not to spoil them a whole lot; I’m trying to make them grow up as responsible persons,” she said.

At the same time, Kumor can’t help indulging them just a bit

“I love Christmas time, and I love Easter,” she said. “They make it so much fun.”

PREVIOUS: Hunger doesn’t take a vacation, and neither does archdiocesan relief agency

NEXT: People of faith join in public prayers on National Day of Prayer