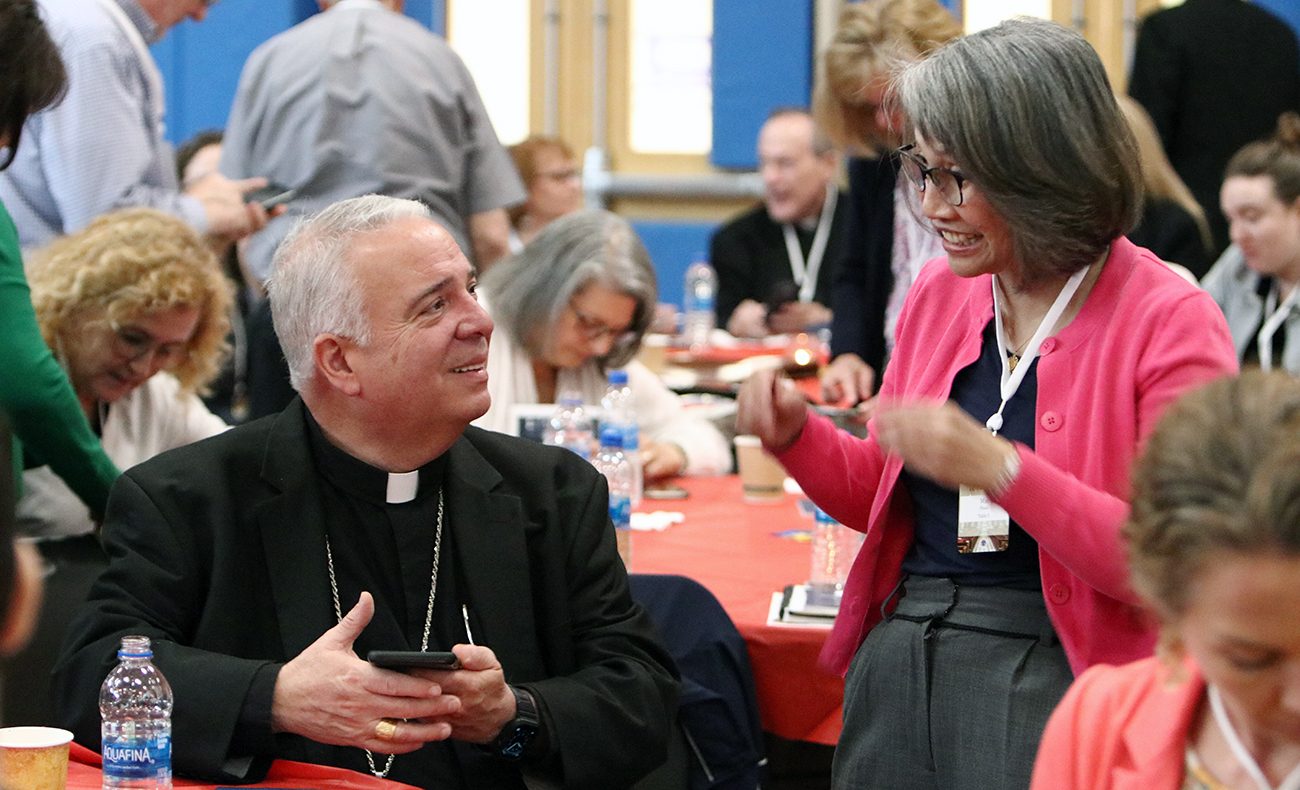 Archbishop Nelson Pérez speaks with a participant during "Making Missionary Disciples," a May 4 workshop hosted by Mother of Divine Providence Parish in King of Prussia that marked the official launch of the archdiocesan Commission for Missionary Disciples." (Sarah Webb)

A new commission looking to revitalize the local church has officially launched its work, which is already taking root in area parishes.

Archbishop Nelson Pérez and Philadelphia Auxiliary Bishop John McIntyre joined some 240 clergy, religious and laity May 4 for a sold-out workshop on “Making Missionary Disciples,” hosted by Mother of Divine Providence Parish in King of Prussia.

Attendees hailed from 64 archdiocesan parishes and three area shrines, and included representatives from the Allentown and Camden Dioceses, as well as the Ukrainian Catholic Archeparchy of Philadelphia.

The all-day session was sponsored by the archdiocesan Commission for Missionary Disciples, convened by Archbishop Pérez in February to encourage faithful to develop a deeply personal relationship with Christ, while inviting others to do the same.

Pope Francis has stressed that “all the members of the People of God” are missionary disciples, or “agents of evangelization,” by virtue of their baptism (“Evangelii Gaudium,” 120).

The FOCUS approach to evangelization, which has expanded from campuses to parishes, centers on the kerygma (Greek for “proclamation”), the announcement of Christ’s salvation to all. Through the organization’s “win, build, send” model, FOCUS-trained missionaries develop friendships with active and inactive parishioners, as well as the unchurched, to spread awareness of the Gospel and to spark ongoing evangelization. 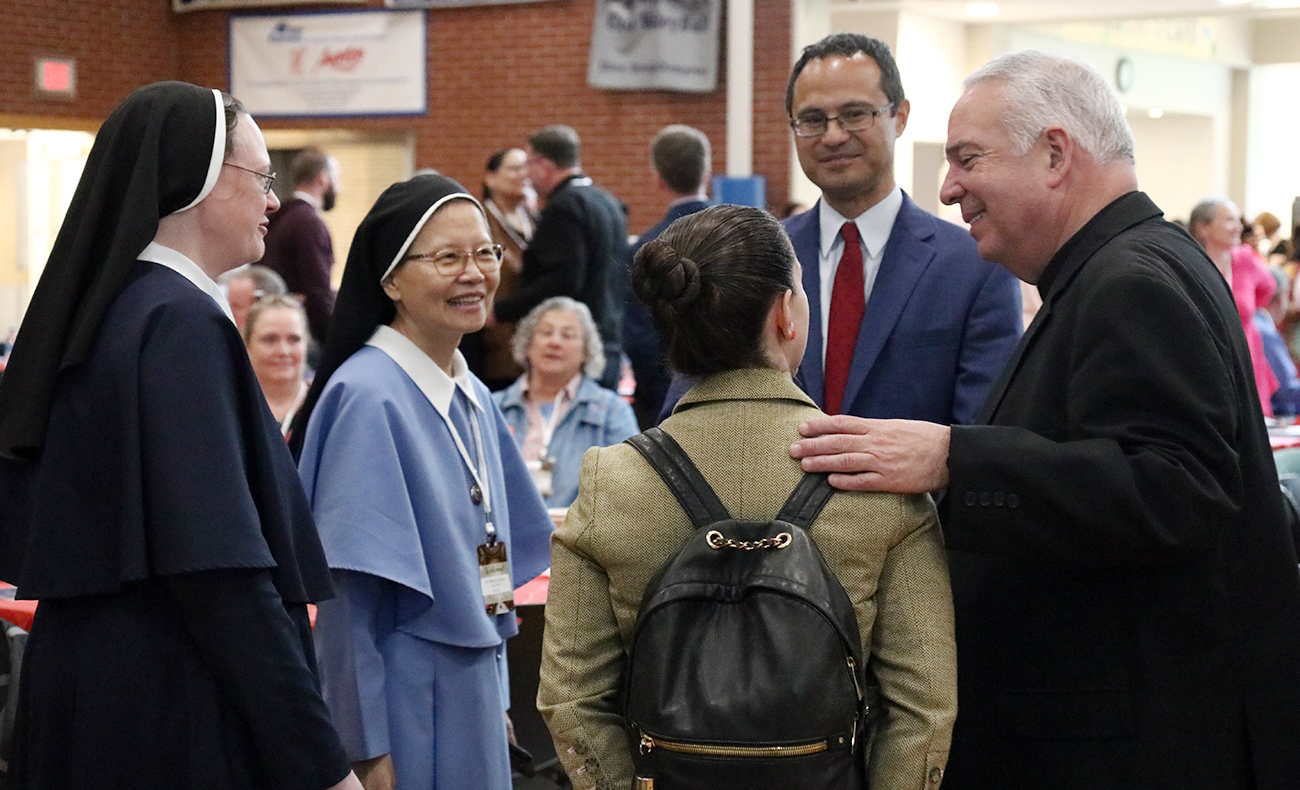 Archbishop Nelson Pérez (right) and Dr. Edward Sri of FOCUS (second right) speak with participants at a May 4 workshop that officially launched the archdiocesan Commission for Missionary Disciples. (Sarah Webb)

“FOCUS introduced us to a paradigm shift, a path to take that will transform our parishes into a community of missionary disciples,” said Meghan Cokeley, director of the archdiocesan Office for the New Evangelization and chair of the missionary disciples commission.

That change in culture “asks us not to measure success by numbers of programs or numbers of people, but by ‘the intensity of the flame,’” said Cokeley, citing a quote by Msgr. Michael Shea in his book “From Christendom to Apostolic Mission,” which Sri referenced during his talk.

And with just over 17% of Catholics in the U.S. attending weekly Mass (according to the Center for Applied Research in the Apostolate), session attendees welcomed a breath of fresh air in the often frustrating work of missionary outreach.

“I sense that our parish leaders came to the workshop with an openness to what the Lord wants to do, and also an awareness that what we are currently doing in many ways is not working,” said Cokeley.

“I think we’re at a very primal stage in the faith again,” said Father Martin Cioppi, pastor of Mother of Divine Providence Parish. “We need to start from the very beginning .. that original kerygmatic message and the encounter with Christ.”

Father Cioppi has researched evangelization in depth, having completed a doctoral dissertation on what St. John Paul II called the new evangelization — or the reintroduction of the faith to formerly Christian areas — in Catholic secondary schools.

“I’m going to work with our principal over the summer to incorporate what we learned from this workshop into our school,” he said.

Father Cioppi also meets regularly with a group of young adults at his parish, sharing faith over meals and relaxed conversation.

“They come for dinner and we talk about philosophy and religion,” he said. “They’re hungry to hear, and we have to teach them how to listen well.”

In so doing, said Father Cioppi, “we have to make sure we’re compassionate,” presenting “the word of Jesus” and allowing young people to “soak it in.”

At other times, faithful simply need to knock on their neighbors’ doors – gently, and with a welcome packet, said Father Louis Bellopede, pastor of St. Mary Parish in Schwenksville.

On May 21, members of that parish will partner with the Legion of Mary to hold an “E-Day” (Evangelization Day), visiting homes on the surrounding streets and inviting residents to contact the parish for sacramental and educational needs.

“It’s almost like a Catholic Jehovah’s Witness,” quipped Father Bellopede. “But they’re not going to come to us and ring the rectory doorbell; we need to go to them. That’s what Christ did.”

The universal Synod, with its emphasis on communion, mission and participation, gave the E-Day additional impetus, he said.

“The rubber hits the road when we hit the road and get our there and ring doorbells to say, ‘Hi, we’re here,’” said Father Bellopede. “We want to say, ‘You’re welcome to come to our church family, and if you need anything –sacraments, a marriage blessing, a new church home – come to St. Mary.”

Missionary discipleship is just getting started in the Philadelphia Archdiocese, said Cokeley.

“As the archbishop said in his homily (at the May 5 workshop), this is not an isolated event,” she said. “It’s the beginning of a trajectory.”

PREVIOUS: Miracles of medical science, and the divine, happen at Torresdale

NEXT: Montco parish showcases Ukraine’s dances to save children amid war