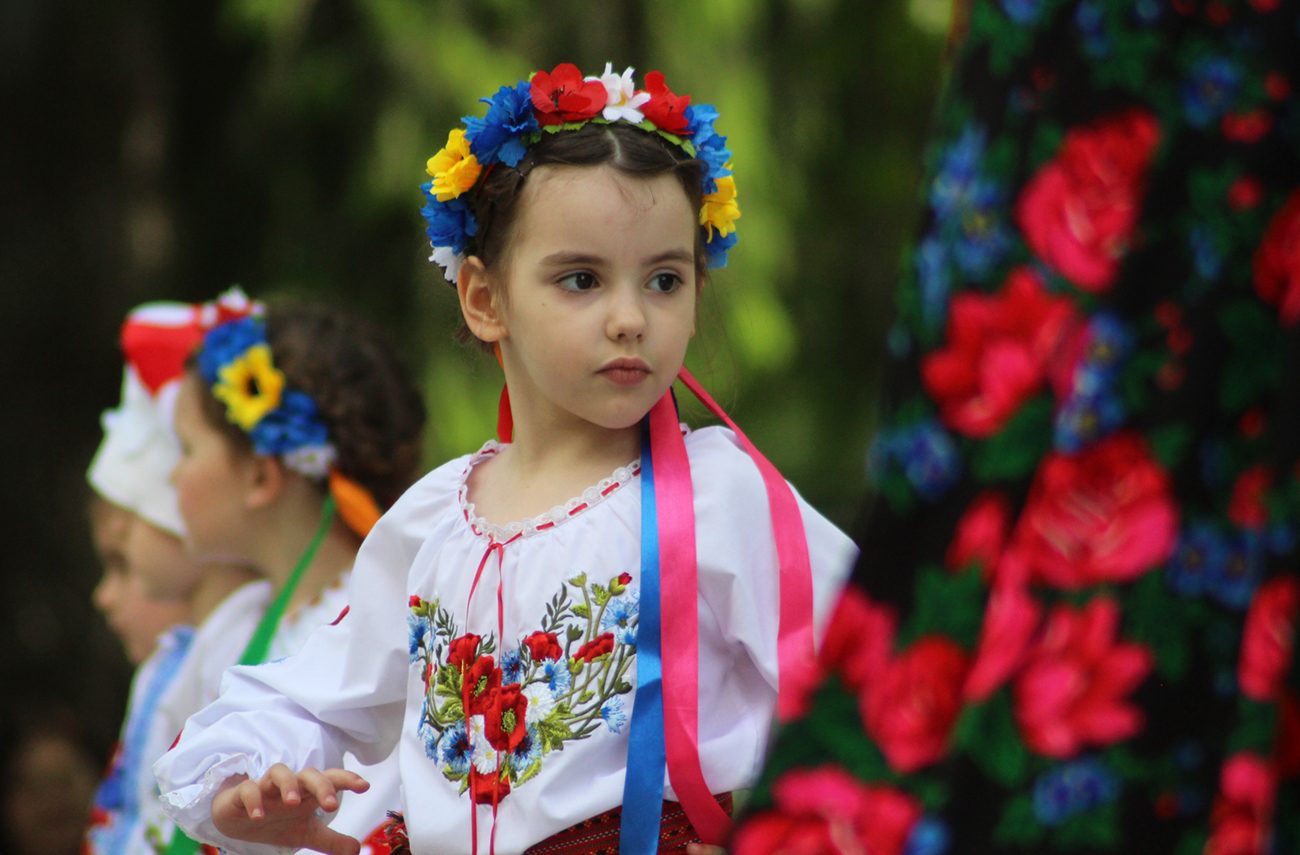 Teodora-Mariia Lukavenko, a student of the Voloshky School, performs a traditional Ukrainian dance during a May 15 benefit hosted by St. Michael the Archangel Ukrainian Catholic Church in Jenkintown, the proceeds from which will support humanitarian aid to children in Ukraine amid a Russian invasion.

On May 15, St. Michael the Archangel Ukrainian Catholic Church in Jenkintown hosted a benefit performance featuring the Voloshky School of Ukrainian Dance, with guest appearances by the Voloshky Ensemble, Kruno Spisic Gypsy Jazz and the Metropolitan Ballet Academy and Company.

(View a photo gallery of the May 15 dance festival.)

Traditional Ukrainian foods and crafts, along with an array of auction items, rounded out the event, with all proceeds benefiting the Ukrainian Federation of America’s relief efforts for Ukraine, now in the third month of a full-scale invasion by Russia that has killed thousands and displaced some 13 million.

Father Ostap Mykytchyn, assistant priest at St. Michael, opened the concert with the words “Khrystos Voskres” (“Christ is risen”), the traditional Ukrainian Catholic greeting for the Easter season, followed by “Slava Ukraini” (“Glory to Ukraine”) – and both phrases summed up the day-long gathering, which balanced pageantry, suffering and hope, said organizers.

“We had a lot of discussions about how to create this event,” said Voloshky School director and instructor Larysa Spisic. “It couldn’t be celebratory; somehow we needed to help Ukraine and tie in with what’s going on, but these are kids, and we wanted it to feel uplifting.”

Performers, who ranged from pre-kindergarten level to young adult, “dedicated each dance to a particular person, region or group of people in Ukraine … so (they) could feel they were contributing and making a difference,” she said, adding that the steps, music and costume details showed off the regional variations in Ukraine.

The youngest dancers, many making their debut, devoted their “Na Halyavyni” routine – one common to the Kyiv region — to Ukraine President Volodymyr Zelensky, while the level two troupe offered “Polisski Zabavy,” a nod to a densely forested area of northwestern Ukraine, to “everyone protecting Ukraine,” announced the event’s master of ceremonies (and dance parent) Katria Kowal. 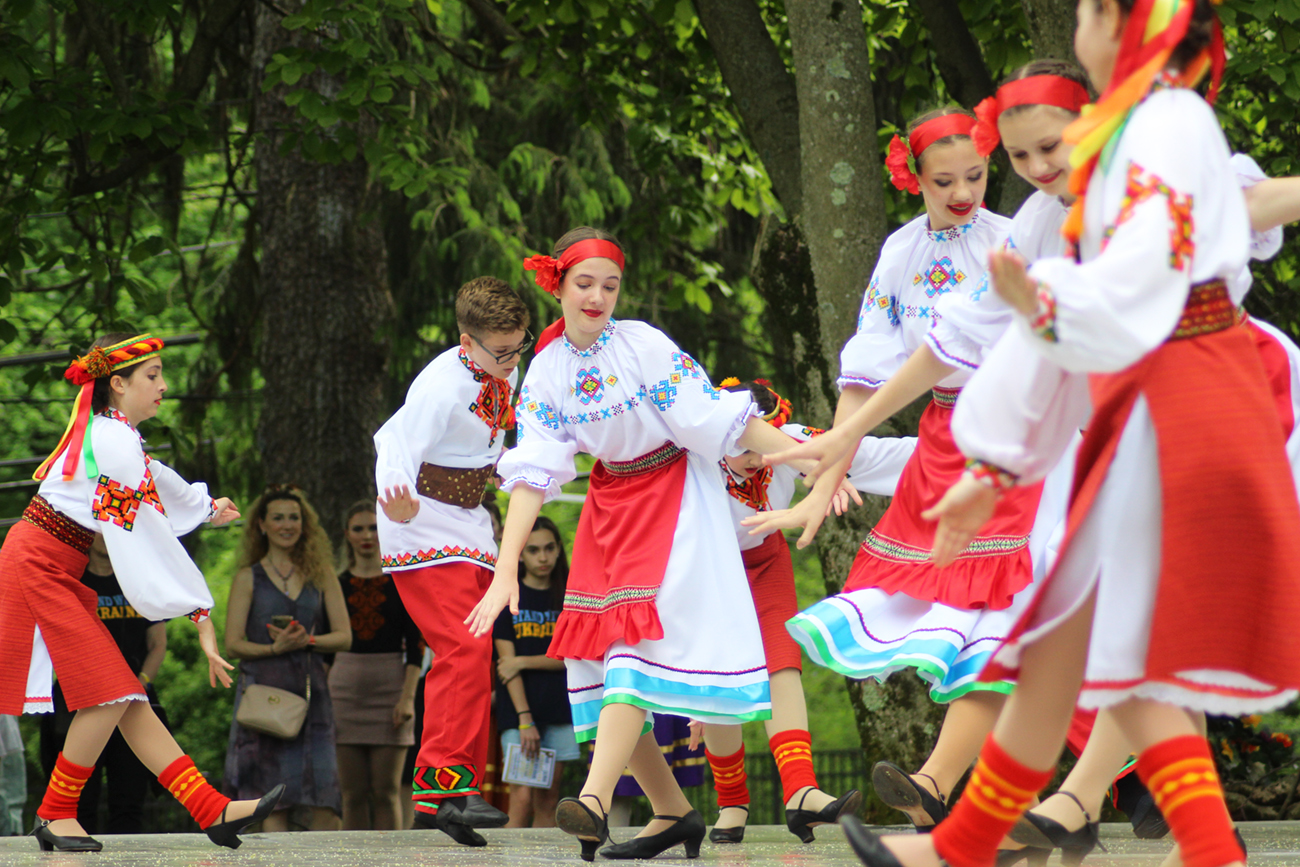 Students of the Voloshky School performed numerous Ukrainian folk dances at a May 15 benefit for Ukrainian children hosted by St. Michael the Archangel Ukrainian Catholic Church in Jenkintown. (Gina Christian)

A virtual class of dancers hailing from New York, North Carolina and Pennsylvania whirled through the kolomejka moves they had practiced over Zoom, honoring “all those who creatively defend Ukraine with technology,” said Kowal.

She commended the day’s “brave Kozaks (Cossacks)” for their piece – which included the iconic prysiadka, or squat-kick – on behalf of Ukraine’s air force and air defense personnel.

The school’s Voloshky Ensemble, directed by Taras Lewyckyj, provided a stylized commentary on the current invasion with its “Puppet Dance.” Banned by the Soviet Union during the 1970’s, the choreography depicted a fur-hatted Russian soldier attempting to come between a Ukrainian couple, only to tumble from a swift kick delivered by both of them. The performers dedicated the number to all Ukrainian soldiers and their loved ones.

The comic routine provided a welcome relief from “hearing about so much tragedy, with (Ukrainians) being killed, maimed and scattered all over the world,” said Rev. Taras Naumenko, dean of St. Vladimir Ukrainian Orthodox Cathedral in Philadelphia.

His wife’s family members were forced to evacuate from southern Ukraine, while one relative still remains about 100 miles from the devastated city of Mariupol, which has been relentlessly targeted by Russian shelling. An attack almost killed the brother of one of his students at St. Sophia Ukrainian Orthodox Seminary in central New Jersey, where he teaches. 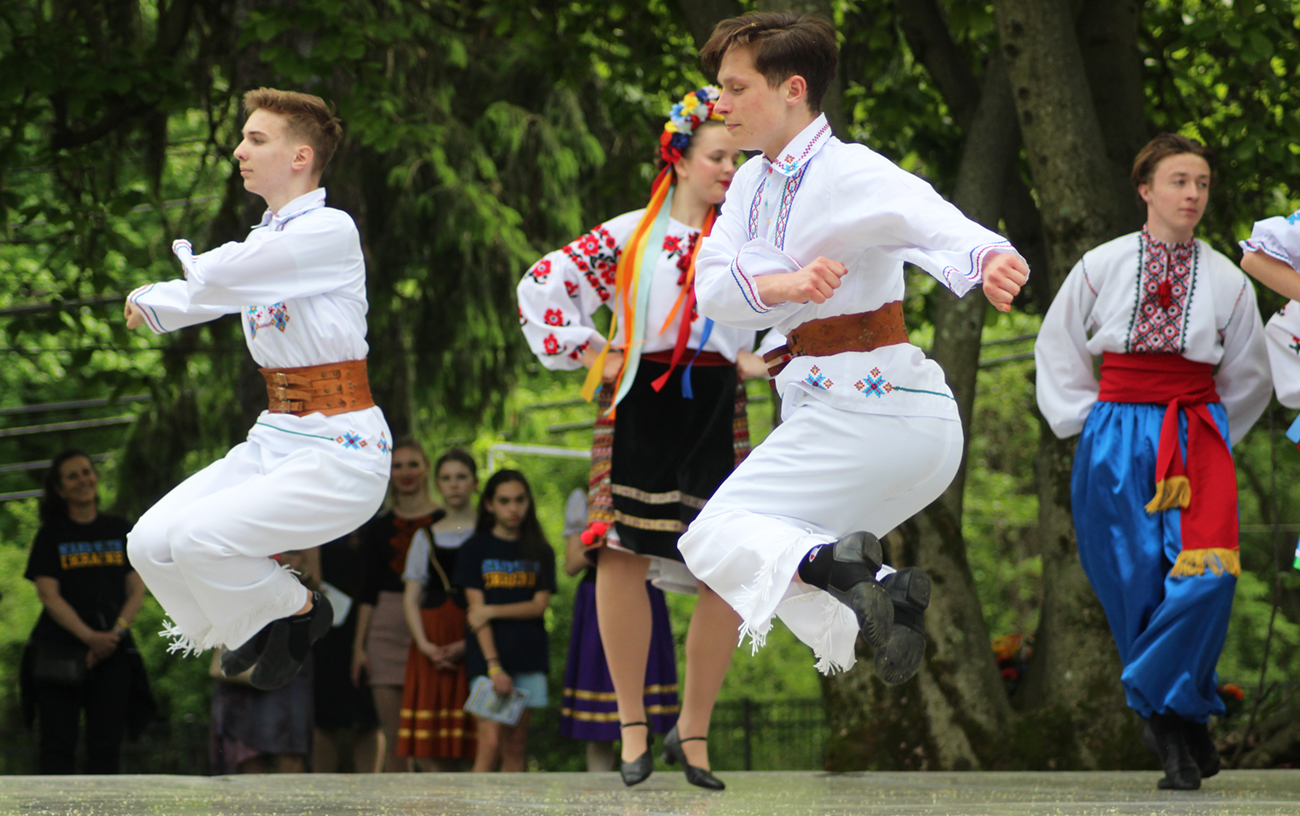 Traditional Ukrainian dancers took to the air a number of times during a May 15 benefit hosted by St. Michael the Archangel Ukrainian Catholic Church in Jenkintown, the proceeds from which will provide humanitarian aid for children in war-torn Ukraine. (Gina Christian)

“This is what we live and breathe on a daily basis,” he said, adding that such aggression has been “going on for hundreds of years.”

Rev. Naumenko said own mother was almost killed as a child during the Holodomor, an artificial famine created by Soviet Union premier Joseph Stalin that starved anywhere from 4 to 6.5 million Ukrainians between 1932 and 1933.

Reflecting on his friendship with another concert attendee — Father Roman Pitula, rector of the Ukrainian Catholic Cathedral of the Immaculate Conception in Philadelphia – Rev. Naumenko said the current war has “united not only Ukraine, but the world against an evil power.”

And the young dancers on stage traced the steps to a vision for a restored Ukraine, said Kowal.

“This is our future,” she said.

NEXT: Join the ordination of archdiocese’s new priests