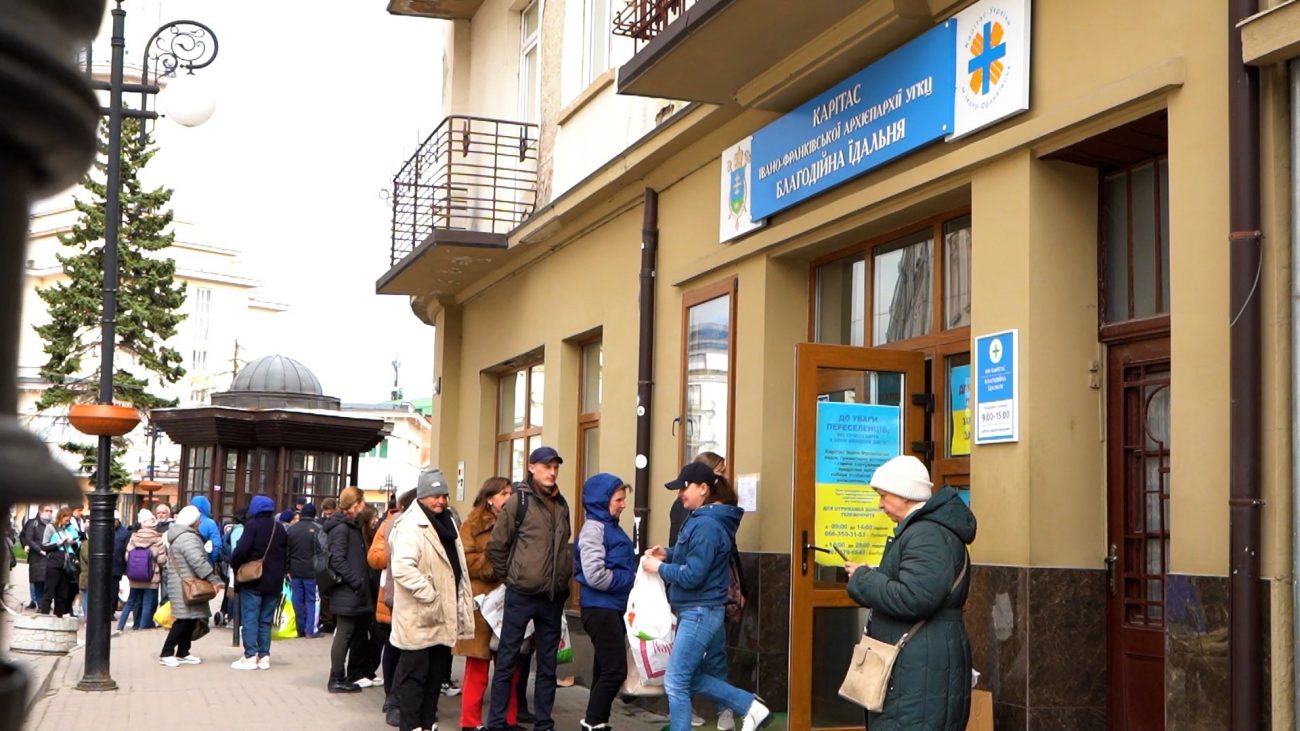 People displaced by Russia's war on Ukraine wait for assistance at the Caritas office of the Archeparchy of Ivano-Frankivsk, Ukraine, April 18, 2022. (CNS photo/Voznyak Production)

Dozens of archdiocesan priests have taken up their own collection to aid the people of Ukraine, now in its third month of a brutal invasion by Russia.

Residents of Villa St. Joseph, the retirement community for archdiocesan priests in Darby, Delaware County, have raised more than $10,000 by placing a simple donation box in the facility’s lobby.

When Russian forces entered Ukraine Feb. 24, “a lot of the priests, as the news developed and the horrors (emerged) … said the first thing we had to do was pray for the people of Ukraine, and pray for peace,” said Father Edward Kennedy, the interim rector of Villa St. Joseph.

“He asked if we could take up a collection,” said Father Kennedy. “And that’s how it started.”

The campaign was “a very simple one,” he said. “We put a box on the table in the lobby with the colors of the Ukrainian flag on it.”

“They saturated the place with signs,” said Father Kennedy. “We had (them) by the guest register, at the elevator, on the bulletin boards.”

Over the past 10 weeks, residents, staff and visitors filled the little container with $10,184 – a significant sum considering Villa Saint Joseph’s small staff size, modest number of visitors and limited incomes of residents.

But Father Kennedy wasn’t surprised by that generosity, which is down in part to Villa residents’ keen awareness of the Russian invasion of Ukraine.

“Our priests very much keep up with the news,” he said.

Since February, thousands have been killed and some 12.8 million Ukrainians displaced by Russian attacks, which came eight years after Russia annexed the Crimean Peninsula and backed separatist republics in Ukraine’s Donetsk and Luhansk regions.

Discoveries of hundreds of civilian atrocities following the latest Russian occupation – including mass graves, summary executions and survivor accounts of rape and torture – have prompted a number of internationally-led criminal investigations. Ukraine President Volodymyr Zelensky has called for a Nuremberg-style tribunal to hold perpetrators accountable.

Father Kennedy said he hopes the funds help to alleviate some measure of the horrific suffering, particularly among the most vulnerable in Ukraine.

“All these mothers running with their children, fleeing to refugee camps — that’s where the help right now needs to be,” he said.

The Villa residents plan to direct the money to either Catholic Relief Services or to the humanitarian aid fund of the Ukrainian Catholic Archeparchy of Philadelphia, which is directly supporting Caritas Ukraine (part of Caritas Internationalis), the equivalent of Catholic Charities in Ukraine.

And the donation comes with a message, said Father Kennedy.

To donate directly to the humanitarian aid fund of the Ukrainian Catholic Archeparchy of Philadelphia, visit the Archeparchy’s website.