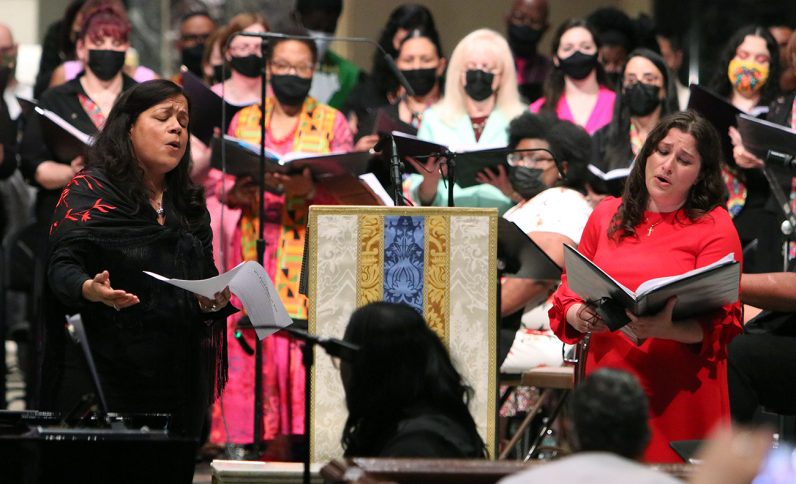 Singing with the combined choirs at the “We Find Hope in You: A Concert for Racial Healing” on Sunday, May 15 in the Cathedral Basilica of SS. Peter and Paul, Philadelphia are Damaris Thillet (left), director of the the Coral Hispana de Filadelfia; and Charlene Angelini, director of the Archdiocesan Choir of Philadelphia. They were two of the five choirs united in hope in the face of the sin of racism.

As the nation grieved the massacre of 10 Black people last weekend at a Buffalo supermarket, more than 100 Catholics in Philadelphia were raising their voices — not in rage or revenge, but in hymns of hope and healing.

The timing of “We Find Hope in You: A Concert for Racial Healing” was especially poignant, coming almost exactly 24 hours after a self-avowed white supremacist shot 13 people in the racially motivated attack.

The Sunday afternoon concert May 15 at the Cathedral Basilica of SS. Peter and Paul united five choirs in singing the music of five cultures over 300 years in three languages.

(See a comprehensive photo gallery of the concert here.)

Performing as one, members of the Archdiocesan Choir of Philadelphia, the Coral Hispana de Filadelfia, the Nigerian Igbo Catholic Adult and Youth Choirs, and the Philadelphia Catholic Gospel Mass Choir joined 10 instrumentalists under the leadership of five conductors for the event, sponsored by the Archbishop’s Commission on Racial Healing.

The commission, established in January 2021, is led by Father Stephen Thorne, former pastor at St. Martin de Porres Parish in Philadelphia, and is composed of a diverse mix of 18 members — mostly laypeople — from the city and suburbs.

‘An opportunity to heal’

Over the 14 packed months of planning and rehearsal for the concert, organizers could not have imagined how much healing would be needed when the event day arrived.

Authorities said the Buffalo shooter drove 200 miles to target the store because it served a Black community.

At the cathedral, shock, grief and a sense of awful familiarity permeated the event, which Father Thorne called “an opportunity to heal the wounds that afflict us as a community.”

(Watch video excerpts from the concert below.)

The concert united more than 100 singers and musicians of varied races, cultures and languages in performing hymns — joyful and solemn, yearning and triumphant — in one voice of faith and prayer.

Rather than each choir taking a turn to perform from its own tradition, all of the participants learned all of the hymns in their native languages – English, Spanish and Nigerian Igbo — as well several original compositions by the directors.

Mastering the 13 diverse works forced everyone, no matter how experienced, out of their comfort zone and into intense personal encounters with people of other languages, races and cultures, organizers said. Hours and hours were spent perfecting each note, sound and word to authenticity.

For all its tragic timeliness, the concert was not a random event. Rather, it was the fruit of a decision to turn the other cheek in the face of an earlier racial wound: a scathing racist post last year on a Catholic Facebook page by a suburban parishioner, who objected to a Martin Luther King Day celebration in his church.

Tonya Taylor-Dorsey, the renowned director of many area choirs, including the Philadelphia Catholic Gospel Mass Choir, was among many people stunned and hurt by the post, written by a Catholic in a Catholic medium.

Rather than responding in kind or ignoring the offensive remarks, Taylor-Dorsey thought of the concert — an idea she had never even heard of. “I give God all the credit,” she said later.

With the immediate support of Father Thorne and the Archbishop’s Commission, she reached out to other directors including Damaris Thillet, Nkeiruka Uduma, Chisom Orji and Charlene Angelini, and the work was underway.

Thus, the concert “transformed hate into love,” Father Thorne said Sunday. After the “sickness” of Buffalo, “we come together to give witness to the power of music to bring people together … that we might walk together as one people – God’s people.”

‘We have work to do’

The program included reflections by three members of the Archbishop’s Commission that called out the sin of racism, including racism within the Catholic Church.

After George Floyd was killed by police in 2020, Commission member Udochi Ekwerike said she was haunted by three questions: What is happening? Why is it happening? Why am I not hearing enough from my church leaders?

Commission director Gerald Davis, who is African American, recalled a “nun I adored” making a racial remark to him as a child on the playground. He also remembered his family having to wait to receive Communion at Mass until every white person in the church been served.

“I love this church, but we have the responsibility to do something,” Davis told the audience of several hundred people, who included Archbishop Nelson J. Pérez. “We have to face the fact that we have work to do.”

The concert opened with “Amazing Grace,” a testament to John Newton’s conversion from slave owner to ardent abolitionist.

Several original compositions included the namesake “We Find Hope in You,” by Angelini, Thillet and Taylor-Dorsey. The hymn beseeches, “Hear my cry, O God, listen to my prayer. We find hope in you.”

‘The path to healing’

In concluding remarks, Archbishop Pérez thanked the musicians and choirs for their commitment to an event that was built on cross-cultural outreach and personal encounter.

“What you are modeling is the path to healing,” he said. “What a wonderful, wonderful example of what it means to be church.”

Though devastated at the events in Buffalo, “to be a Christian is to find hope in the midst of despair,” the archbishop said. Even though Jesus Christ “himself was the victim of hatred and evil, it didn’t stop him.”

In an interview later, Taylor-Dorsey lavished gratitude on everyone involved in the year-long effort and said the event had fulfilled her vision.

“I wanted the concert to show that it is possible for different cultures to come together, and work together and sing together, and write songs together, and make decisions together,” she said. “I wanted us to present an experience for the choir members to see that they can praise and worship God in different languages, to accept the different flavors of the other cultures.

“This world doesn’t operate and revolve around one culture. We are a collection of colors.”

NEXT: West Catholic students pray, learn about Ukraine with archbishop