When young Katherine Drexel galloped her horse through the fields surrounding her family’s summer home in the countryside of what is today Philadelphia’s Torresdale section, she could not have imagined helicopters landing on and ambulances rushing up driveways carved into those same grounds.

In the late 1800s medical miracles were few, and technology that today might have prevented the death from cancer of her beloved stepmother did not exist. Heiress to her father Francis Drexel’s banking fortune and her position in society did not spare her the limitations of late 19th century medicine.

But Katharine Drexel’s future did not lie in riches and high society. Her experiences in helping her mother distribute food to the poor in Philadelphia’s inner city, and her travels to the Southwest United States to witness the deprivations of Native Americans led her to spend 64 years and $20 million of her inheritance as founder of the Sisters of the Blessed Sacrament for Colored and Indian Peoples.

Her mission was to preach the Gospel and educate Black and Native American people in order to prepare them to take their places in American society. She once scoffed at a friend’s suggestion that she surely would be called “saint.”

But in 2000 her work and the church’s recognition of two miracles attributed to her intercession led to her canonization in Rome by the pope, now St. John Paul II.

The proximity of the Level 1 Trauma Center and a one-time future saint’s summer retreat represent the not-so-blurred line of two types of miracles. 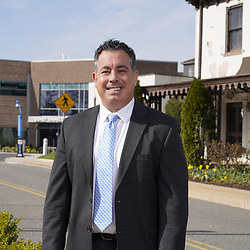 Richard Galup, president of Jefferson Health-Northeast – the health system comprising Torresdale, Frankford and Bucks hospitals), lives, in a way, in both worlds. His desk and other administrative offices located in the former Drexel mansion are reminders of a very special history accompanying a future with promise.

For instance, Galup can look out and view with pride the new Sidney Kimmel Cancer Center, opened just over a year ago and offering cutting-edge technology adapted for all types of cancer.

Galup takes pride in the fact that the Kimmel Center’s rigorous standards in science and patient care qualified the center as one of 71 National Institute of Cancer’s Designated Cancer Centers in the nation.

Plans also are in place for the construction of a new building to provide proton therapy, a radiation procedure that targets tumors while minimizing damage to surrounding tissue and limiting long-term effects.

“My father died of cancer in 2016, and my mother has always prayed to St. Katharine Drexel,” Galup said. “I do believe I was put here for a reason, and that was to be able to build this cancer center at Torresdale.”

Science and the simplicity of prayer add a modern dimension of hope, as seen in the community members who, because of COVID restrictions, stand outside St. Michael Chapel offering up their petitions for themselves or loved ones, Galup said.

Read more about the hospital system’s care here: Miracles of medical science, and the divine, happen at Torresdale

PREVIOUS: People of faith join in public prayers on National Day of Prayer

NEXT: Miracles of medical science, and the divine, happen at Torresdale