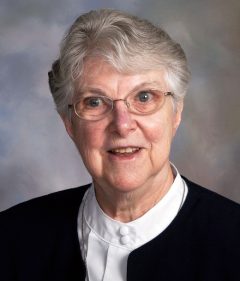 Sister Mary K. King, I.H.M. (formerly Sister Mary Kevin), died March 28 in Camilla Hall, Malvern. She was 88 and in the 70th year of her religious life.

Soon after she entered the Sisters, Servants of the Immaculate Heart of Mary. She received her habit and her religious name, Sister Mary Kevin, in 1952 and pronounced her first vows in 1955.

From then to 2008, Sister Mary ministered as a classroom teacher in grades K through six.

After ministering as a full-time classroom instructor, Sister Mary provided religious enrichment for children in grades K through eight at St. Matthew in Forestville, Conn. from 2008 to 2012. Then, through September 2016, she served in the school office at St. Gabriel, Philadelphia.

Sister Mary went to Camilla Hall in October 2016 where she served in the Apostolate of Prayer and Assistance throughout Camilla Hall until her death.

She is survived by her brother Thomas J. King (Ann), her sisters-in-law Theresa (Francis X.), and Regina (Samuel) as well as her many nieces, nephews, grandnieces/nephews, and her I.H.M. community. She was predeceased by her parents, her sisters Margaret Hartley (Dyess) and Dorothy O’Hara (John), and her brothers James F. and Francis X.