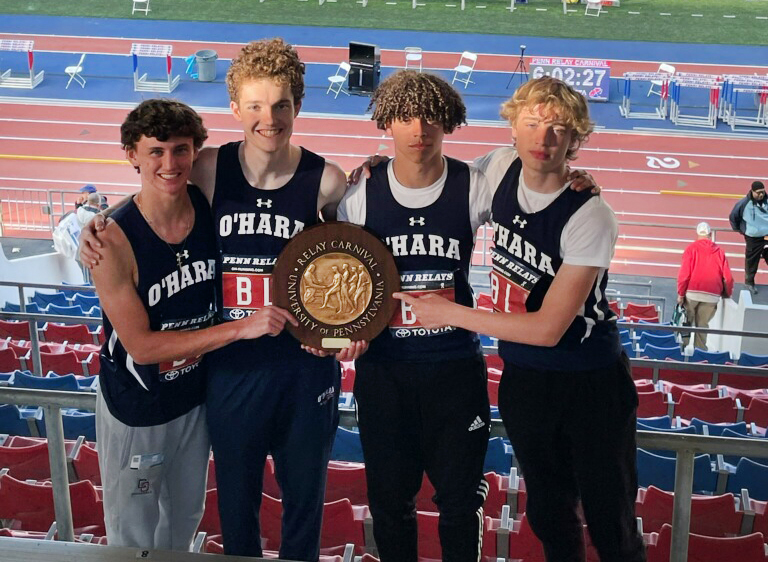 Few events render more enjoyment than the Penn Relays. Preparing on and off the track are hundreds of high school, college and professional representatives from all over the world. Every imaginable uniform color dots the horizon, and several events occur simultaneously.

It’s an utter cornucopia for the senses.

Among the local story lines from the 126th annual tradition on April 28-30 was Cardinal O’Hara’s boys and Bonner-Prendergast’s girls both capturing first place in the 4×400 relay.

“It’s very inspiring racing and watching all of my peers,” said Cardinal O’Hara sophomore Jaden Collins, who in grade school ran for St. Gabriel’s in Norwood. “Whether they are faster or slower, putting everything on the line at a big meet like that, and watching the colleges and pros, it’s great to see where I hope to be later on in my career.”

“It feels great winning after all the hard work we put in day in and day out and just knowing we are a young relay and we are all coming back next year to go even further,” said Collins. “We were really confident heading into the race, and as we all watched it unfold, we knew we were in a great position to take home the win.”

That said, placing first would require Collins to catch up to, and pass, one runner in front.

“I wanted to get out fast and get near him and then take him once we got near the end of the first curve so I could lead the race, so I sprinted ahead of him and when I passed him, I felt great and energized,” said Collins. “I held the pace in front of him and once I hit that second curve, I gave it all I got and if anyone tried to pass me, I would just turn it up even more.”

Maloney is an alum of St. Dorothy School in Drexel Hill.

“Going to the Penn Relays and winning a gold medal as a freshman was an amazing experience,” said Maloney. “My teammates and I came to the Relays with our goal of going out and giving it all we had. We had the confidence in each other to be top competitors. Although we have a very young team, our coaches knew we would run a great race.”

Schikel, who like teammate Collins ran in grade school for St. Gabriel’s in Norwood, said he had a “good feeling” going into the race.

He felt even better at the three-quarter mark.

“I knew we won the race once I turned the last straight away as I was right behind the kid in first and when I handed it off to my anchor,” said Schikel, referring to Collins.  “I knew not many people are faster than our anchor, especially when it’s close.”

The leadoff work by Sharrets supplied a carryover effect for the rest of the quad.

“I’m super excited and proud that we were able to win at Penn Relays,” said Sharrets. “All of us had been putting in so much work, and it pays off when you can win these big races. It was an amazing experience.” 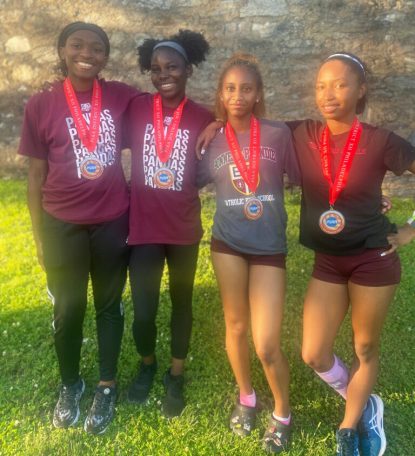 “Winning this was very exciting,” said Johnson, who in grade school attended Drexel Neumann Academy in Chester. “The win gave us a sense of happiness and relief. There were a lot of talented runners we were running against, so we couldn’t expect to win. We knew that as long as we all put out our best effort, the result would speak for itself. Seeing how proud our coaches were really made the win feel surreal.”

A main reason for the special gratification experienced by Johnson — and all seniors — concerned making up for lost opportunities.

“The very first time I ran at Penn Relays was my freshman year, where we placed second,” she said. “Due to COVID, Penn Relays was cancelled in 2020 and 2021. So knowing this would be my last Penn Relays as a high school student-athlete made the satisfaction of the win even greater.”

The Delaware University-bound Johnson said it seems like just yesterday she was preparing for high school.

“It is truly amazing how fast time goes,” said Johnson. “Being a senior, I have been able to see the growth of these three underclassmen. They are going to be amazing runners as the years go on. I’m very proud of them and their many accomplishments. I look forward to seeing them blossom in the near future.”

While lauding Johnson for both her athleticism and influence on the younger Pandas, Kevin Kee credited Virgil Sheppard for his work with the sprinters.

Kee is the girls’ head coach, and Sheppard is the boys’ head coach. Kee prepares distance events for both teams; Sheppard does the same with sprints.

Each of Johnson’s relay mates chimed in on her Penn Relays experience.

“You have to believe in yourself and your teammates, and that’s what we did,” said Allen-Bey.

According to Love, “I will most remember walking off the track knowing how proud my teammates were.”

An effusive Allen vividly recalls the aftermath of the race.

“What I will remember most about Penn Relays is our coach (Kevin Kee) running up to us after the race because he was so proud,” she said. “I also will never forget getting a chance to run on the track for the first time. Even though it’s just my freshman year and there is more to come, winning the 4×400 for the first time being there is definitely something I’m going to remember.

“Winning was very unexpected. I think it is very important we came back with a big plaque for our school to put in a glass case next to all the rest. So I feel like winning this meant a lot.”

NEXT: All-Catholics in spring sports announced