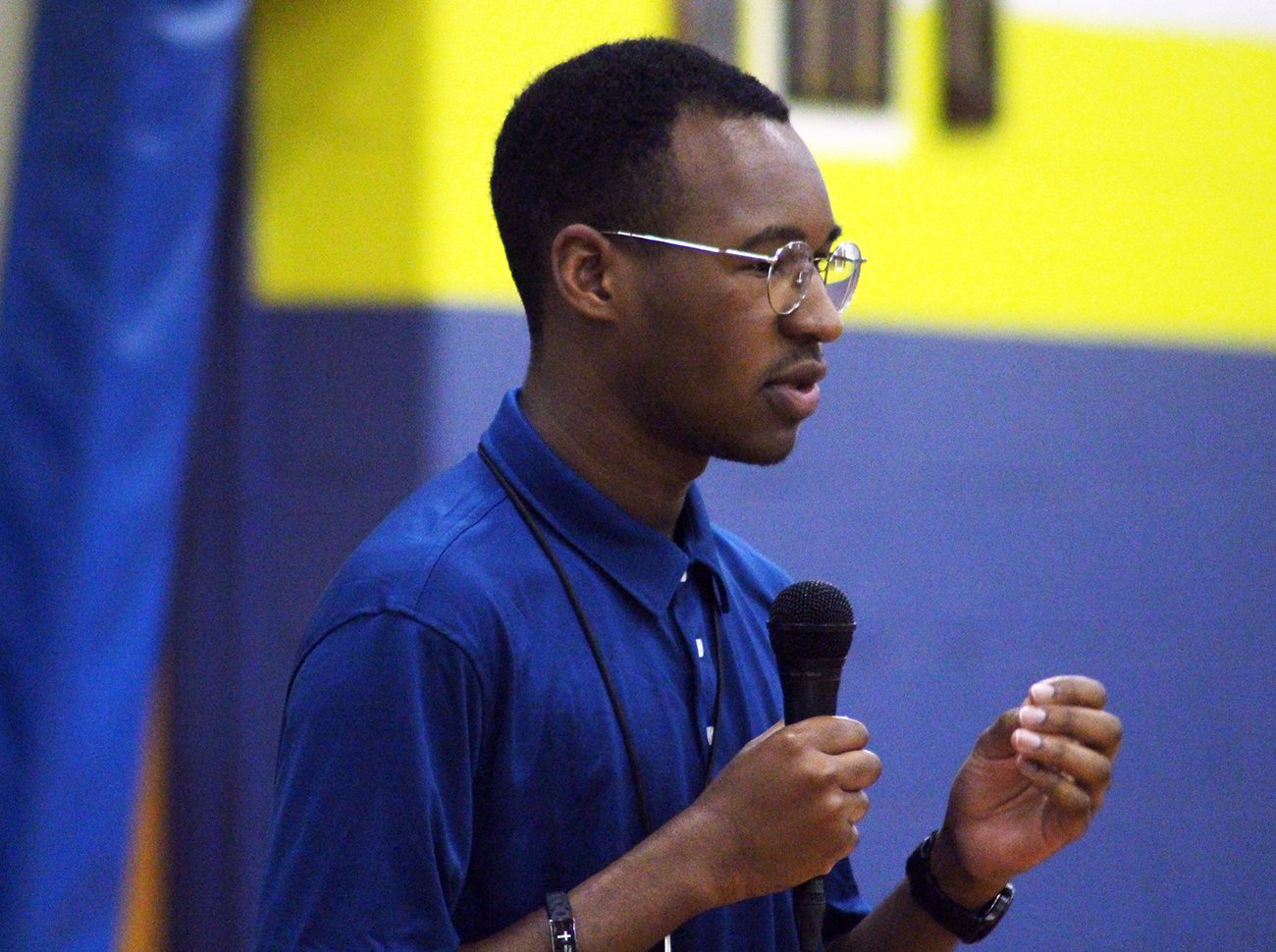 Joshua Brooks, an intern at the archdiocesan Office for Black Catholics, speaks to students at St. Pius X School in Broomall June 20 about six African Americans on the road to sainthood. (Gina Christian)

Students at an archdiocesan school in Delaware County wrapped up their school year with a lesson in sanctity.

On June 20, dozens of kids in grades four to seven at St. Pius X School in Broomall gathered to learn about six Black Catholics now on the road to sainthood.

Presenter Joshua Brooks, an intern with the archdiocesan Office for Black Catholics (OBC), surveyed the lives of Venerable Pierre Toussaint (1776-1853), a former slave who became an entrepreneur and philanthropist; Mother Mary Elizabeth Lange (1784-1882), foundress of the Oblate Sisters of Providence; Venerable Henriette Delille (1813-1862), foundress of the Congregation of the Sisters of the Holy Family; Julia Greeley (born between 1833 and 1848; died 1918), a former slave who promoted devotion to the Sacred Heart of Jesus; Sister Thea Bowman (1937-1990), who converted to Catholicism as a child and entered religious life as a Franciscan Sister of Perpetual Adoration; and Venerable Augustus Tolton (1854-1897), a former slave who became the first known black Roman Catholic priest from the United States.

For Brooks, the stories of the sainthood candidates hit home. Like many of the six, he is a convert to Catholicism, having been raised as a Baptist.

And like Tolton, he’s embracing a call to the priesthood, and will enter his first year of college at St. Charles Borromeo Seminary in Wynnewood in August.

Tolton and Lange have had a particular influence on his life, said Brooks, a Class of 2022 graduate from Monsignor Bonner and Archbishop Prendergast High School in Drexel Hill.

Lange’s deep spirituality has also been inspiring, he said. 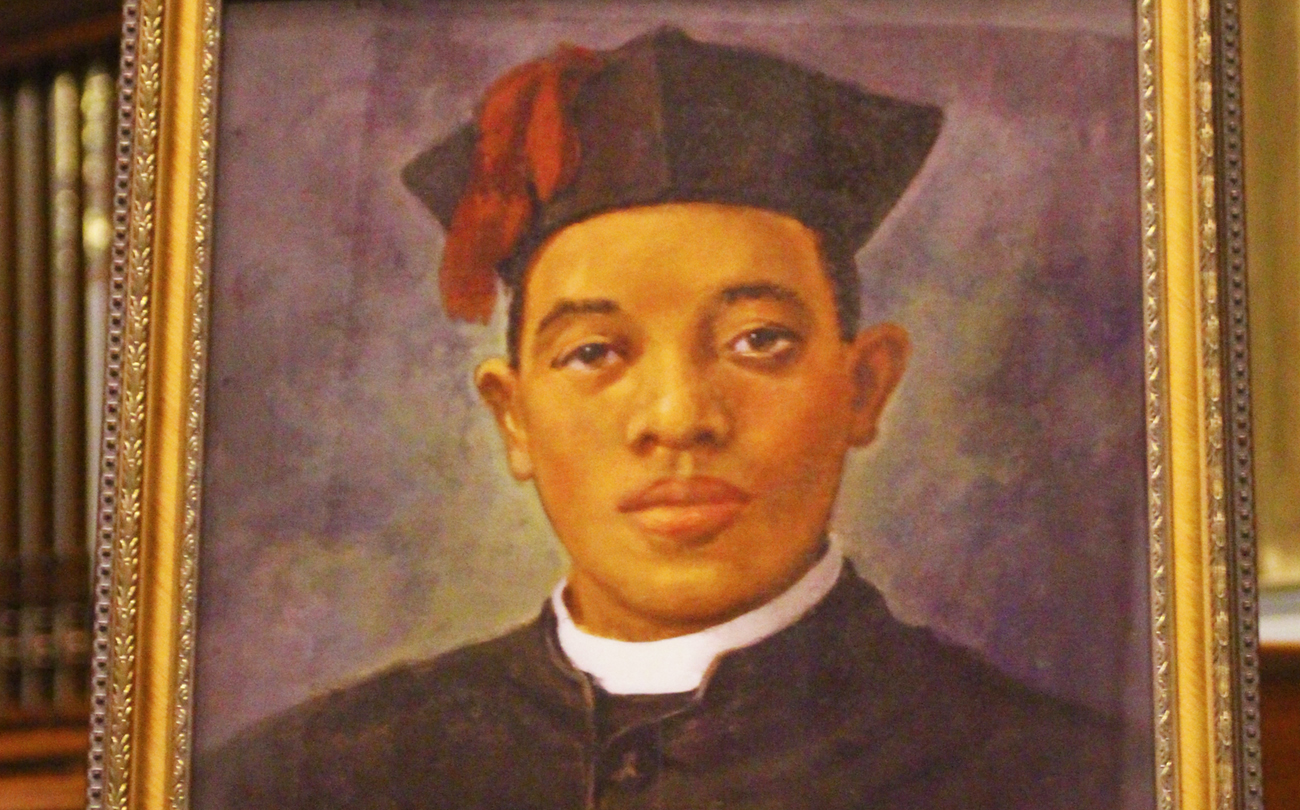 A portrait of Venerable Augustus Tolton, the first recognized African-American priest, is on permanent display at the Cathedral Basilica of SS. Peter and Paul. (Gina Christian)

“I loved how she also prayed while working,” said Brooks. “That’s something I even try to do. I would pray the Divine Office in school or go to the chapel, and just take a break with God and try to encounter him so he can replenish me and give me strength.”

Brooks said he “fell in love” with the Eucharist, which he described as “essential to our faith.”

“It’s not a symbol; it’s the body of Christ,” he said. “God wants us to have an intimate relationship with him.”

And that communion encompasses others, said Brooks.

“When I’m at Mass and I’m with my brothers and sisters in Christ, I realize, this is my family,” he said. “We’re all gathered around this table of Christ, and God is making Himself present. … That’s just the heart of it.”

As with the six sainthood candidates, service and solidarity naturally follow, he said.

Bowman, Delille, Greeley, Lange, Tolton and Toussaint were all “people who lived for the other person,” he said. “As you grow up and find your vocation in life, realize that you have to live for others and serve others.”

And although classes have ended for this academic year, the time for learning that lesson is now, Brooks added. 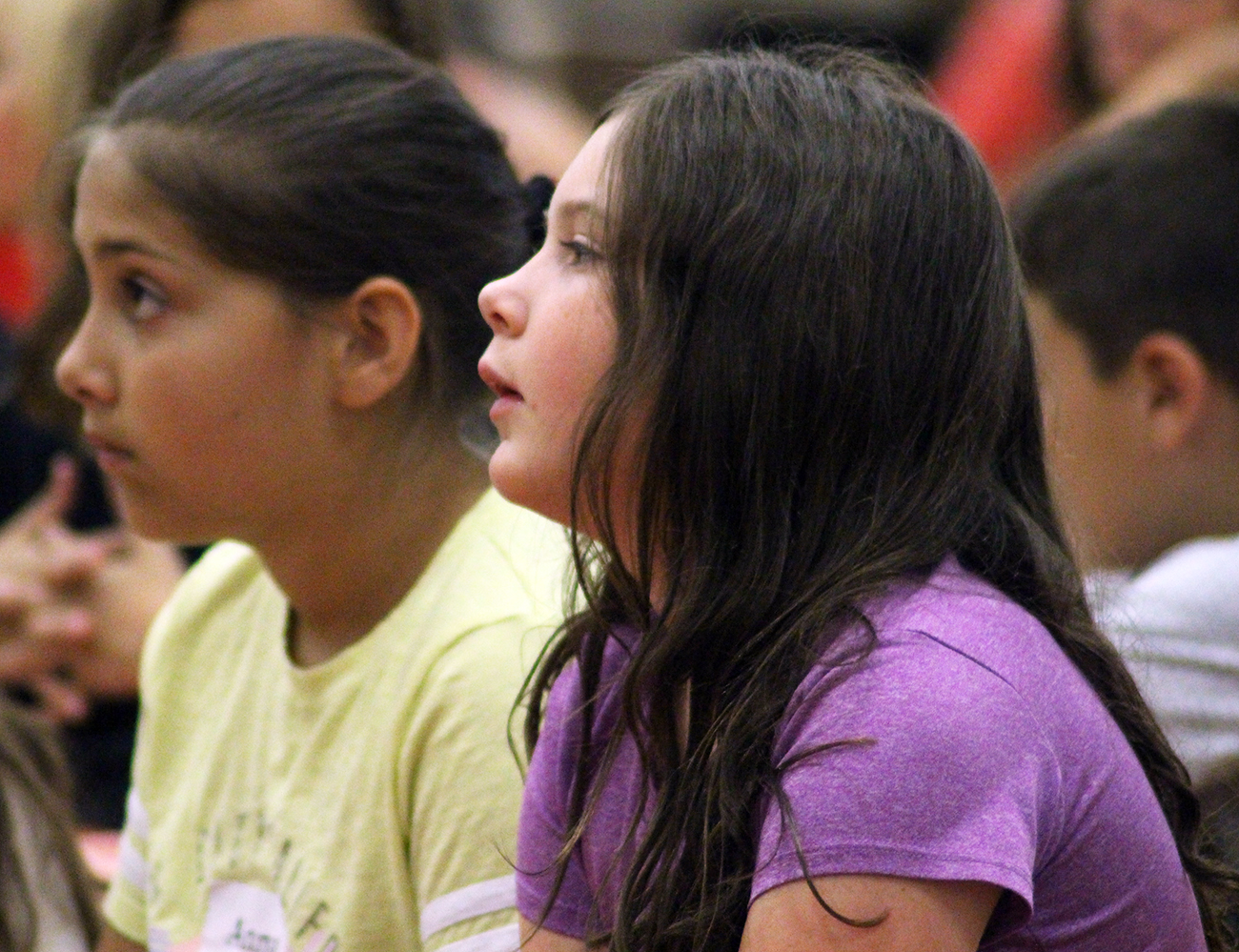 Students at St. Pius X School in Broomall listen to a presentation by Joshua Brooks of the archdiocesan Office for Black Catholics on six African American candidates for sainthood, June 20. (Gina Christian)

NEXT: Little learners claim diplomas, with eye to kindergarten