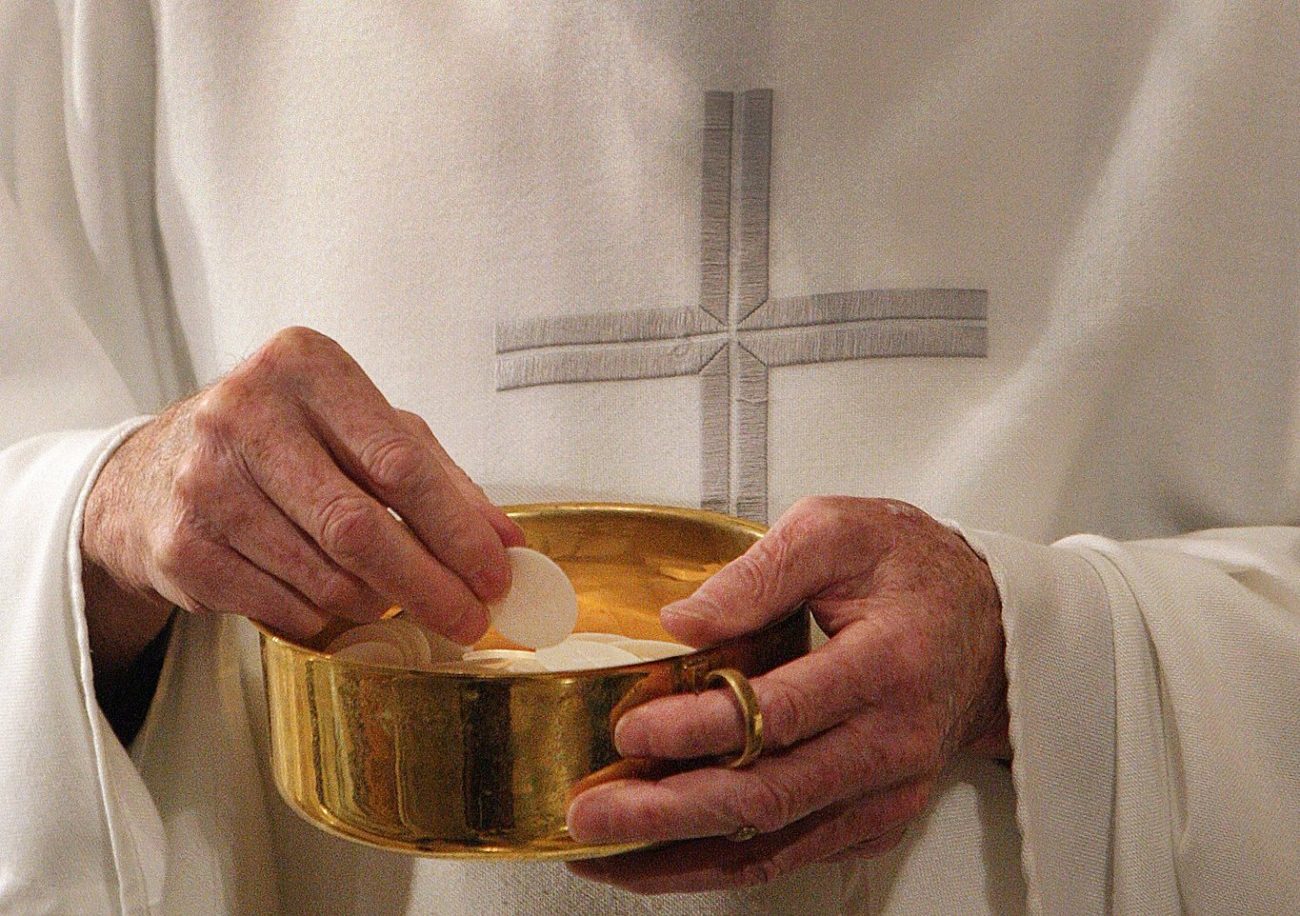 A priest prepares to distribute Communion during Mass in Washington, D.C. In June 2022, the U.S. bishops will launch a three-year National Eucharistic Revival to rekindle belief in the Real Presence of Christ in holy Communion. (CNS photo/Bob Roller)

A grassroots effort is looking to reawaken belief in – and devotion to – the Real Presence of Christ in the Eucharist, in Philadelphia and throughout the country.

Sponsored by the U.S. Conference of Catholic Bishops (USCCB), the National Eucharistic Revival will officially be launched on June 19, the Solemnity of the Most Holy Body and Blood of Christ (a feast also known by its Latin name, Corpus Christi).

The three-year initiative opens with a diocesan phase (June 19, 2022 – June 11, 2023) which will be coordinated by Father Joseph Shenosky, pastor of Sacred Heart Parish in Oxford.

That first year will equip leaders for the project’s second phase (June 11, 2023 – July 17, 2024), when pastoral ministers will guide parishes in “getting to what is most central to our life as Catholics,” said Father Shenosky. “The goal of the revival is to renew the church by entering into a living relationship with the Lord Jesus in the holy Eucharist.”

Included in that year will be an archdiocesan Eucharistic Congress, set to take place Sept. 30, 2023 at the National Shrine of Our Lady of Czestochowa in Doylestown.

The revival’s third year (July 17, 2024 – June 8, 2025), focusing on broader evangelization and missionary outreach, will kick off with the first National Eucharistic Congress in almost 50 years, to be held July 17-21, 2024 in Indianapolis. The gathering is expected to draw some 80,000 participants.

(Watch a video message from Archbishop Nelson Pérez on the National Eucharistic Revival.)

But between now and then, said local experts, there is work to be done in reacquainting faithful with what the Second Vatican Council called “the source and summit” of the Catholic faith: the Eucharist.

A loss of faith and focus

The task has become a challenge in recent decades: a 2019 study by the Pew Research Center found that only about one third (31%) of Catholics in the U.S. said they believed in transubstantiation, the change whereby the bread and wine at Mass, having been consecrated, become the Body and Blood of Christ.

An overwhelming majority (69%) of those surveyed said the bread and wine merely symbolized Christ. Most of those respondents did not in fact know transubstantiation was actually church teaching. Of those aware of the doctrine, 22% nonetheless rejected the idea. 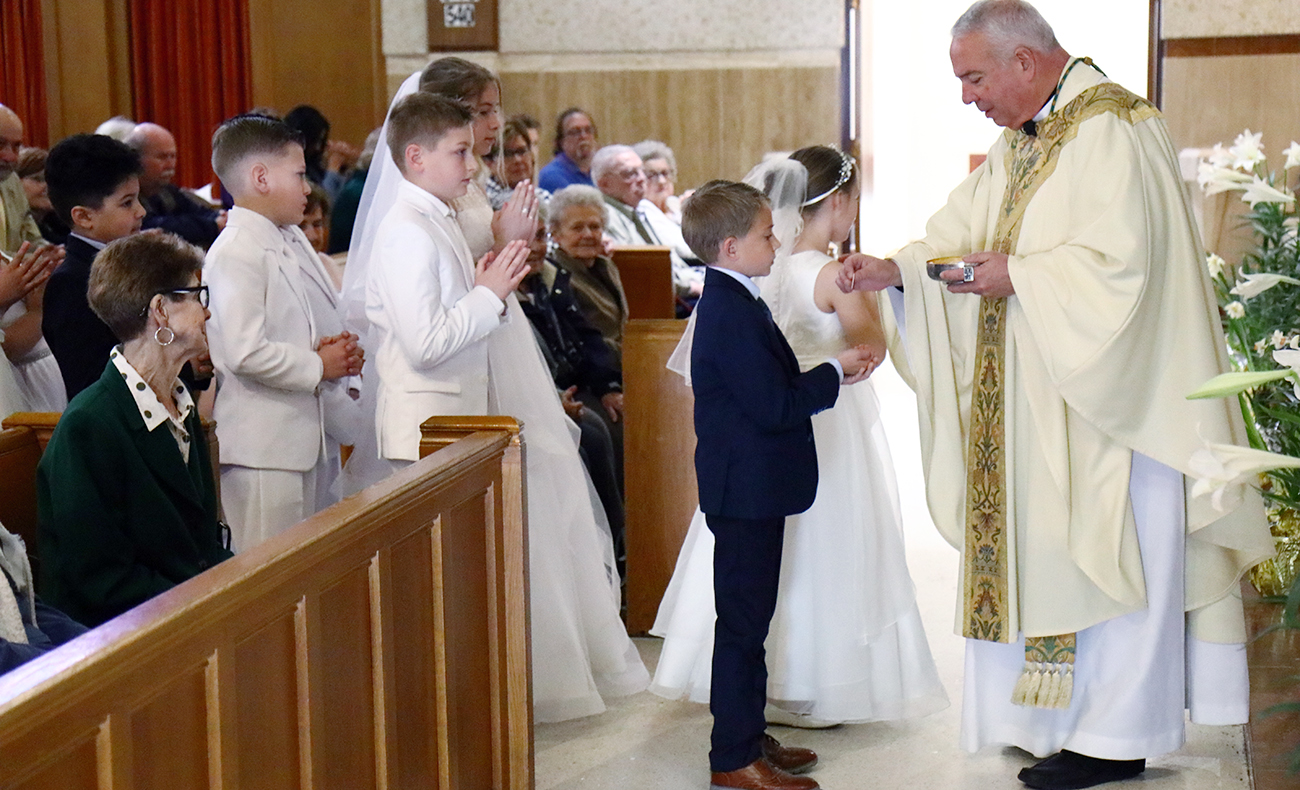 More Americans are also dismissing religious affiliation and belief in general. In December 2021, Pew found “the secularizing shifts evident in American society so far in the 21st century show no signs of slowing,” with 29% of U.S. adults describing themselves as religious “nones,” and only 45% of U.S. adults reporting that they pray on a daily basis.

Those trends have impacted Catholics directly, Father Shenosky admitted, noting that “many times, people can be fooled into thinking they can find fulfillment and happiness in the things of the world, and be forgetful of the importance of God.”

Among the “multiple social and cultural reasons” for the decline in eucharistic belief among Catholics is an unevenness in the rollout of Vatican II reforms, said Father Dennis Gill, director of the archdiocesan Office for Divine Worship and rector of the Cathedral Basilica of SS. Peter and Paul.

Although the council’s “liturgical reform had, as its goal, a greater understanding of the sacred liturgy and participation of the faithful, it wasn’t paralleled with the necessary faith formation for that to happen,” he said.

As a result, many parishes have experienced a loss of “Christocentricity and verticality” in their liturgies, said Meghan Cokeley, director of the Office for the New Evangelization.

“We’ve become comfortable, complacent and casual with the celebration of the Mass,” she said, adding that trend has manifested itself in everything from homilies to liturgical music to attire.

The art of celebrating Mass

Yet “the church actually has teachings on how to celebrate” Mass so that “people’s gazes are actually directed to the altar,” Cokeley said.

Those teachings — known as ars celebrandi (“the art of celebrating”) and explained in detail by Pope Benedict XVI in his apostolic exhortation Sacramentum Caritatis –stress a faithful understanding of church texts, feasts and seasons; a sense of reverence on the altar and in the pews; and proper preparation for celebrating the Mass – during which “the whole Paschal mystery is made present for us on the altar, the crucified and resurrected Jesus,” said Father Shenosky.

A new archdiocesan webpage, phillyeucharisticrevival.org, includes an array of resources for clergy and laity to deepen their devotion to the Eucharist as part of the three-year renewal process. Among the offerings, available in both English and Spanish, are online courses, videos, teaching documents, prayers and devotions.

A recording of a May 25 introductory webinar on the revival in the Philadelphia Archdiocese can also be accessed at the website.

And while revival leaders are conscious of “how initiative-weary everyone is,” the undertaking is “the most important thing we could possibly devote our time and attention to,” said Cokeley.

The Catholic Church in Philadelphia has a particular history of devotion to the Eucharist, given the legacies of St. John Neumann and St. Katharine Drexel, both of whom centered their ministries on regular reception of and prayer before the Blessed Sacrament, said Father Shenosky.

And today’s faithful can enjoy that same ardor, he said.

“At every Mass, the miracle of miracles is happening,” said Father Shenosky. “Just as if we don’t have food and water for a few days, we will die, and if we don’t have the Eucharist, we will die spiritually. … Consuming the glorified flesh of Christ, the Lord who suffered for us, transforms us.”

For more information about and resources on the three-year National Eucharistic Revival, visit the Archdiocese of Philadelphia’s dedicated website and the revival’s national website.

NEXT: Faith leaders gather in prayer and action to end gun violence