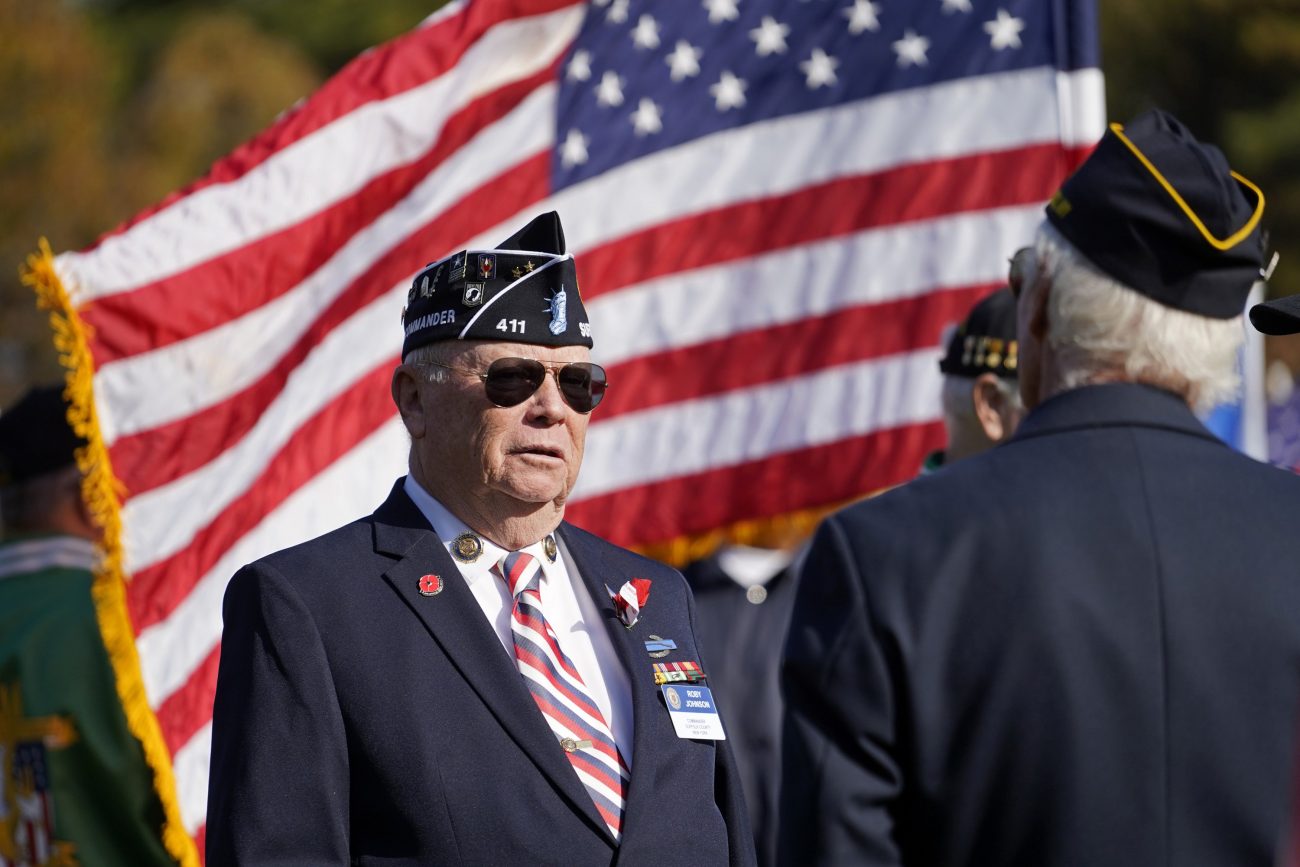 Roby Johnson, a U.S. Army veteran who served in the Vietnam War, chats with fellow veterans prior to a Veterans Day ceremony Nov. 11, 2021, at Calverton National Cemetery in Calverton, N.Y. The Philadelphia Archdiocese will host a June 29 pinning ceremony for Vietnam War era veterans at one of its senior living centers in Philadelphia. (CNS photo/Gregory A. Shemitz)

An archdiocesan senior support agency is teaming up with a U.S. Senator’s office to honor veterans of the Vietnam War era.

Catholic Housing and Community Services (CHCS), in conjunction with the office of U.S. Senator Pat Toomey, will host a ceremony honoring Vietnam-era veterans with a 50th-anniversary commemorative lapel pin.

The ceremony will take place Wednesday, June 29 at 11 a.m. in the Wellness Center of St. John Neumann Place II (SJNPII), located at 2627 Mifflin Street in Philadelphia.

U.S. veterans who served on active duty in the U.S. Armed Forces at any time during the period of November 1, 1955 to May 15, 1975, regardless of location, are invited to receive an honorary pin marking the 50th anniversary of the end of the Vietnam War.

For many recipients, the event is long overdue, said CHCS director Heather Huot.

“When we’re looking at our seniors now, many of them were Vietnam and Korean War vets,” she said. “When they returned home, they weren’t decorated and celebrated the way vets from earlier wars were. Even decades later, they need to know how valued they are for their service to our country.”

The pins, issued by the congressionally authorized United States of America Vietnam War Commemoration, are a way of expressing that gratitude, she said.

The front of the circular pins features an eagle framed by laurel leaves, an ancient symbol of victory, integrity and strength. Stripes recall the U.S. flag, overlaid by six stars representing the U.S. and its five allied nations – Australia, New Zealand, the Philippines, the Republic of Korea and Thailand – during the Vietnam War.

A simple message is embossed on the back: “A Grateful Nation Thanks and Honors You.”

Those words also resound with veterans’ loved ones, who are welcome to attend the gathering, said Huot.

“We received a call from a woman whose husband had served and had passed away,” she said. “The woman asked, ‘Could I come and get a pin for him?’”

The inquiry “shows how meaningful it is to bestow these honors,” said Huot. “This recognition really means a lot to those who served and to their families.”

Hosting the service at SJNPII is fitting, she said — and not only because many CHCS senior residents were of the Vietnam generation.

“At the center of what we do is the dignity of the person,” said Huot.

For more information on the pinning ceremony and to R.S.V.P., contact Linda Rothwein at Catholic Housing and Community Services at 215-587-3663 by Monday, June 27.

NEXT: Pro-lifers grateful for abortion ruling, ready to work for women