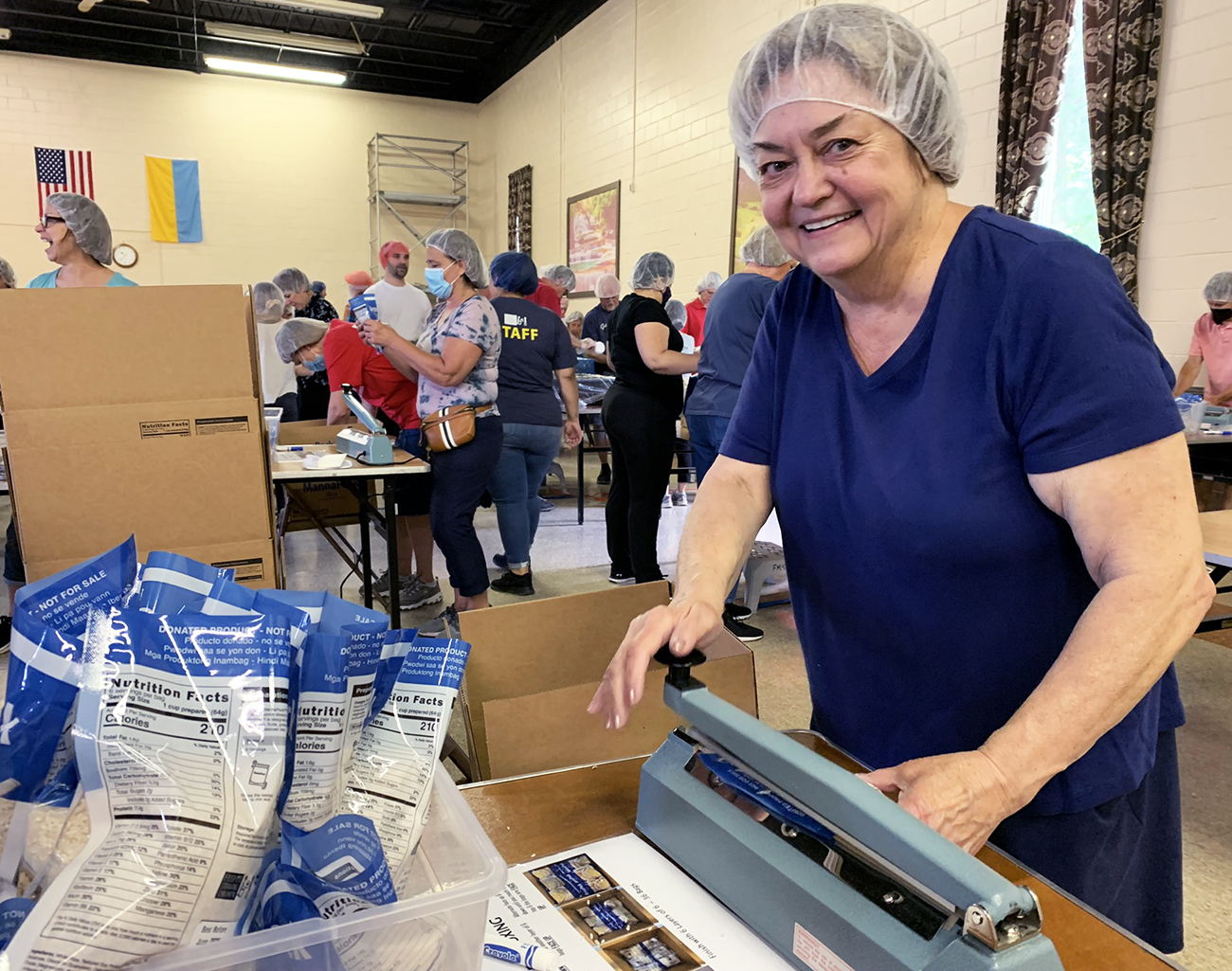 Halyna Reh, a parishioner at St. Anne Ukrainian Catholic Church in Warrington, packages meals for children in Ukraine facing hunger due to a brutal invasion by Russia. (Gina Christian)

A Ukrainian Catholic parish in Bucks County is helping to feed children facing hunger due to Russia’s invasion of Ukraine.

With hot water, the mixture becomes a nutritious “porridge or rice meal that sustains a kid for (one) day until the next,” said Kevin McPoyle, an area facilitator for the Christian nonprofit Feed My Starving Children (FMSC), with which St. Anne’s partnered for the effort.

Over the course of the weekend, volunteers assembled 168,264 bags of the professionally formulated, pediatrician-approved mix – enough to feed 460 children for an entire year, said St. Anne parish secretary Helene Michalko, who along with her daughter Adrianna co-chaired the event.

After shipment to Poland, the packs will be distributed through mission organizations to Ukrainian refugees in Poland and Romania, with some of the boxes going directly into western Ukraine for those internally displaced by the Russian attacks, said McPoyle.

And neither a grain nor a moment of time is wasted in the process, thanks to FMSC’s efficient organization and rigorous food safety standards. Participants worked in designated groups for two-hour shifts, having donned hair nets and gloves after sanitizing their hands at FMSC’s mobile washing stations.

Upbeat background music and a bit of friendly competition between groups helped to spur on the volunteers, but the real motivation came simply from a desire “to turn hands into hope,” said FMSC volunteer program supervisor Devin Shkapich, who flew in from Arizona for the event.

“My great-grandmom, my baba, came to the United States during World War II with her family as a refugee,” said a visibly moved Shkapich. “I’m very proud of my Ukrainian heritage, and as soon as I found out there was going to be a crisis food-packing event at a Ukrainian Catholic church, I wanted to jump on it as soon as possible. It’s very special to be here in this community and share this moment.” 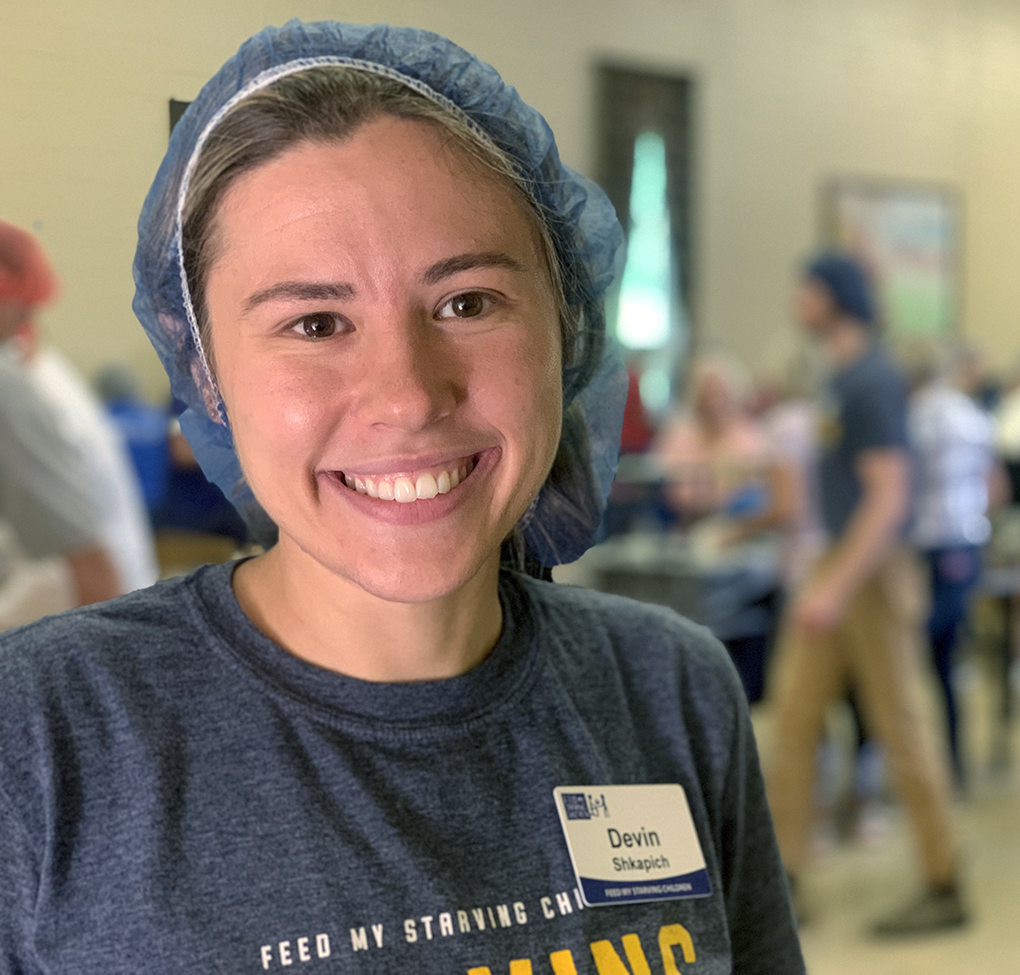 St. Anne parishioner Halyna Reh, a first generation Ukrainian American, said while she and her community members have been collecting clothing and funds for the war’s victims, “food is the necessity.”

The World Food Program recently estimated one in three households in Ukraine are now food insecure because of Russia’s Feb. 24 invasion, which continues assaults Russia launched in 2014 with the attempted annexation of Crimea and the backing of separatist regions in Donetsk and Luhansk.

The latest round of aggression has been marked by particularly gruesome violence against civilians, prompting multinational calls for war crime and genocide investigations.

Among the atrocities cited by global leaders is Russia’s blockade of Ukrainian ports, trapping millions of tons of wheat and other cereal grains. With Ukraine as a major global supplier of grain and cooking oils, an estimated 44 million in 38 countries are now at risk of starvation.

Margarita Simonyan, editor-in-chief of the Kremlin-backed RT network, said at the recent St. Petersburg Economic Forum the prospect of such suffering was a welcome one.

Citing what she called a common joke in Moscow, “all our hope is in the famine” as a way of having economic sanctions against Russia removed, she said.

“I don’t think that people realize the full gravity of the war,” said St. Anne parishioner and cantor Jay Melio. “This is only the beginning for (Russian president Vladimir Putin). This could impact us if we just stand by and let it happen. People just think it’s isolated to Ukraine, but this is just the beginning.”

Amid the dire circumstances, Reh said the food packaging effort — which concluded with prayers over the boxes — was a welcome chance to “feel involved, like you are contributing.”

Her own relatives in western Ukraine are “managing,” but “just about,” she said. “It’s hard to do.”

In the meantime, said Reh, faith is sustaining her.

“That’s the strongest thing I have,” she said. “That’s the only thing that keeps me going — my faith in God, that he will make it all right.” 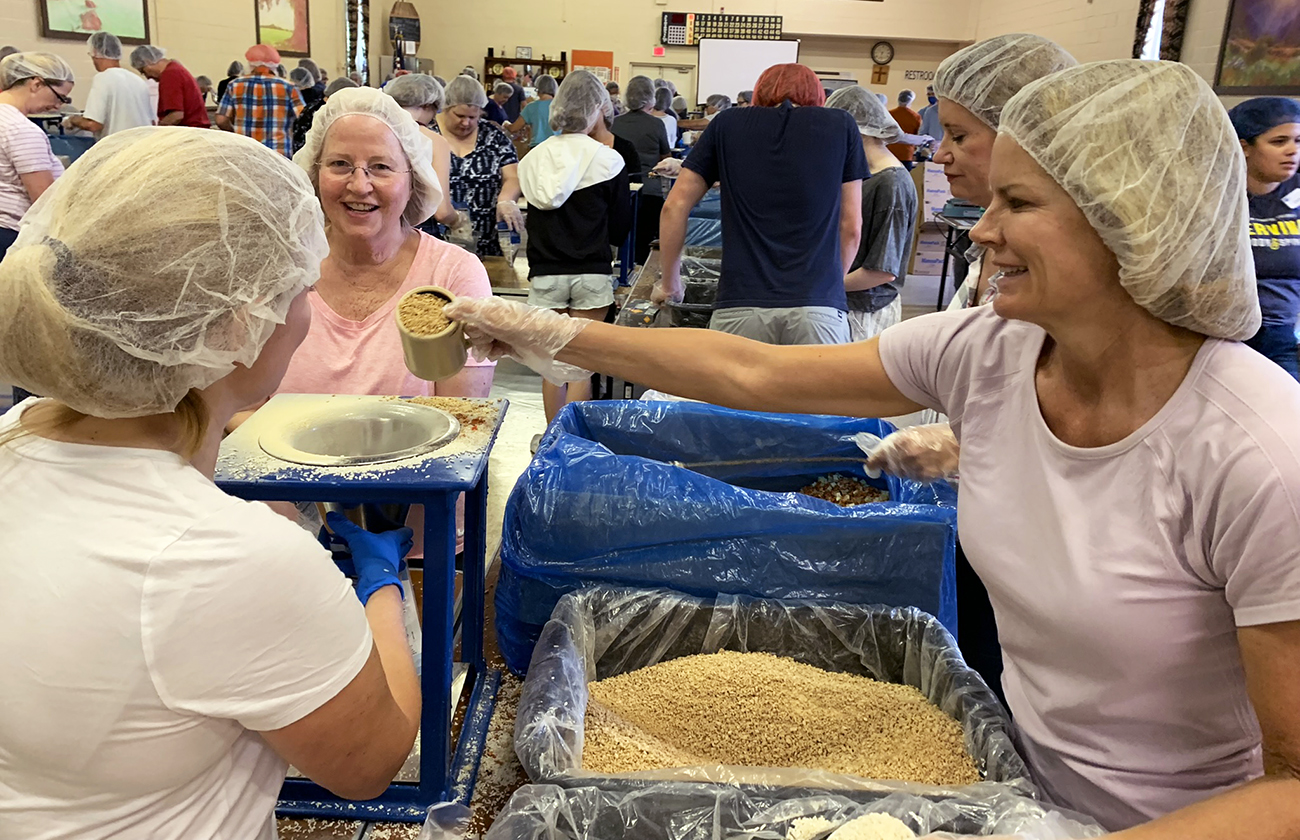 Volunteers assembled packages of food for Ukrainian children during a June 17-19 event organized by the nonprofit Feed My Starving Children and hosted by St. Anne Ukrainian Catholic Church in Warrington. (Gina Christian)