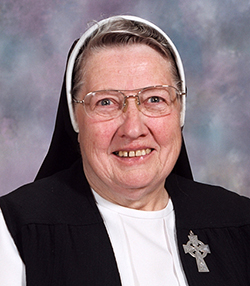 She was 91 and had been a professed member of the Sisters of St. Francis of Philadelphia for 72 years.

Sister Anna was born in Cobh, Ireland and was a member of St. Mary Parish in Mallow. She entered the congregation in 1946 and professed her first vows in 1950.

She earned her bachelor’s degree in history from Our Lady of Angels College, later Neumann University.

She served for 20 years in the Diocese of Trenton, teaching at St. Anthony School and Blessed Sacrament School, both in Trenton, N.J. She also taught at Corpus Christi School in Willingboro and at St. Leo the Great School in Lincroft.

In her 44 years in the Archdiocese of Philadelphia, she taught at St. Mary of the Assumption School in Philadelphia’s Manayunk section and served in administration at St. Mary Home in Bryn Mawr.

Since 2016 she served in prayer and hospitality ministry in Assisi House, where she lived at the time of her death.

Additional ministry included teaching for three years at St. Joseph School in Dallastown, Pa., in the Diocese of Harrisburg. She also served in the Allentown Diocese at Blessed Sacrament School in Bally, Pa. for a year. In 2014-2016, she returned to Ireland serving as a caregiver for a family member.

All services will be held in Assisi House, 600 Red Hill Road in Aston, on Friday, June 17 and will be livestreamed. A Christian Wake Service will be held at 9:30 a.m. followed by a viewing. The funeral Mass will be at 11 a.m. Burial will be in Our Lady of Angels Cemetery in Aston.

Sister Anna is survived by her nephew, Roory (Tonia) Aherne, additional nephews and nieces, and her Franciscan family.