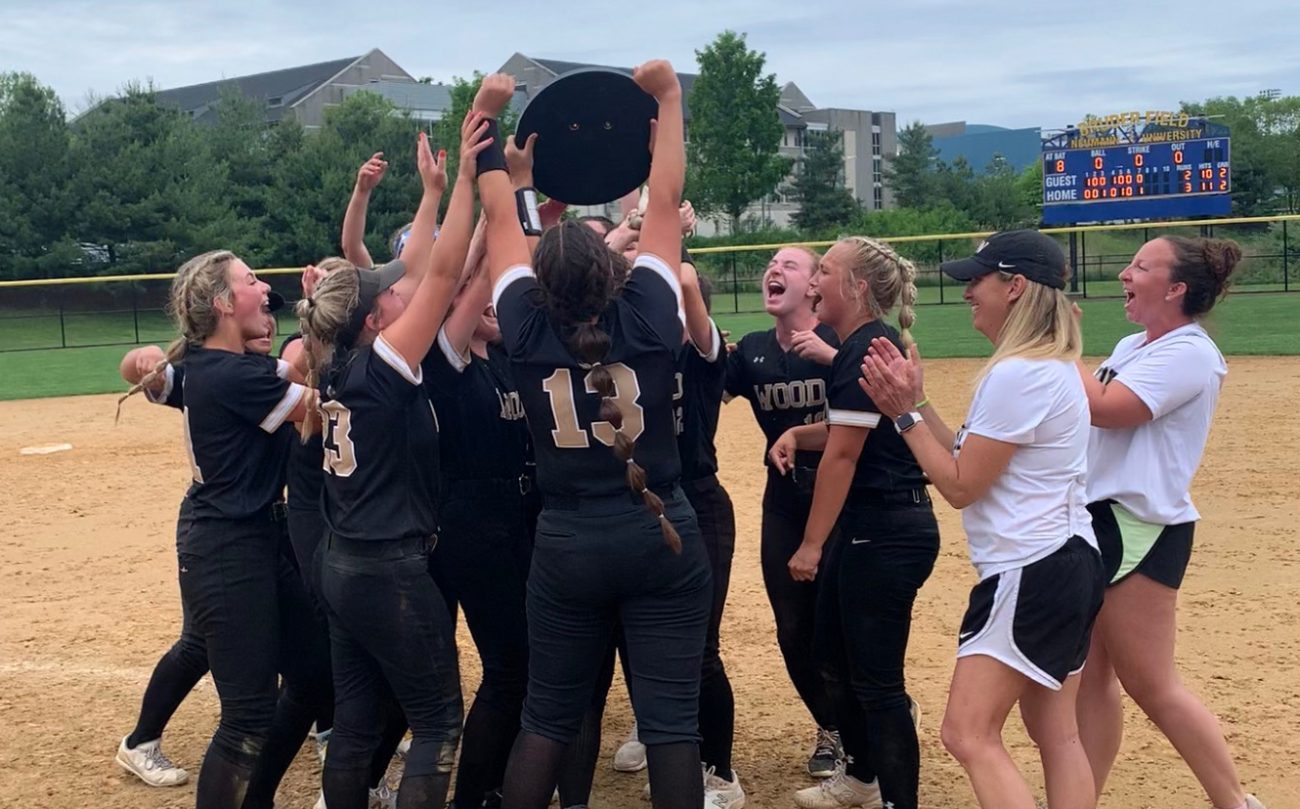 Conwell-Egan had already scored a run and, with runners on first and third, threatened to add more.

It was still the top of the first inning.

On a semi-hard shot up the middle, Archbishop Wood sophomore shortstop Julia Yogis dropped to her knees, gobbled up the dangerous grounder, and stepped on second for the final out.

About 90 minutes later, junior Dakota Fanelli knocked in freshman pinch runner Maya McGrory with the winning run in the bottom of the seventh, and Archbishop Wood had defeated Conwell-Egan, 3-2, in the Philadelphia Catholic League championship May 23 at Neumann University.

“The play Julia made was unreal,” said Fanelli, who finished the PCL postseason tournament having allowed a miserly two earned runs and struck out 17 in three postseason victories while slugging 7-for-11 with six runs batted in and three runs scored at the plate. “She put her body on the line for that play and if she didn’t make the play, it could have cost some runs and the game could have gone differently.

“Even when Coach Jackie (Ecker) gives us off for a day, Julia is always asking me to go to the field to get more work in. Not only is she a great player, she is a great person, too. She is funny, caring and so much more. She puts others before herself and would do anything for anyone without hesitation. Proud to call her my teammate and friend.”

Wood’s players and coaches, however, constantly evangelize the importance of every player accepting her role. So when Yogis was counted on for her steady defense as opposed to work-in-progress hitting, the alum of Warrington’s St. Joseph’s/St. Robert’s School didn’t balk even a little bit. 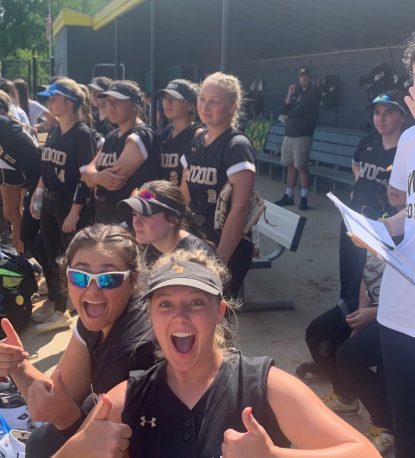 “Making plays in the field and cheering from the dugout is just a whole different vibe that I love,” said Yogis. “Honestly, some people might find it a little strange that I wasn’t disappointed about not hitting today; however, I was still in the lineup and I still had a crucial role to play. Obviously, I would’ve wanted to hit as well, but right now it’s what’s best for the team. Me playing short and Riley (junior Riley Nolan, who scored a run on nifty base running) hitting is what was the best for our team today, and that’s all I care about.”

Yogis credited both her father and aforementioned teammate Abby Windish for embracing an unselfish approach.

“Abby is all about energy and playing as a team,” said Yogis. “She was the one who truly made me realize what playing for my team is. After everything my teammates have been through this year and last year, we all really showed our team-first mentality and that’s what truly matters to me.”

Speaking of Windish, the left fielder experienced her own personal challenge in the championship.

After leading off the seventh inning with a single, hustling to third on a single by Yoos, and being replaced by the speedy McGrory at third base, Windish needed to emulate Yogis by accepting the coaching decision and rooting for her teammates from Neumann’s spacious dugout.

“As a team we’ve emphasized all season the importance of playing as a ‘team,’” said Windish. “This means that each and every one of us has each other’s back and that we all play as one unit.

“Julia is one of the most selfless and hardworking players I’ve ever had the opportunity to play alongside with. She is someone that has embodied this idea all season and even last season. She is an all-around talented player that we can stick anywhere. She is always willing to go anywhere whenever we need, whether in left field, catcher, and now shortstop. She is also so hardworking. She puts in the extra work on off days just to get better and so that she is ready to go wherever we need her. I will definitely miss playing with her next year.”

The team’s other senior, first baseman Gianna Anzideo, will miss her as well.

“Julia Yogis is a great softball player,” said Anzideo. “She has really stepped up this year and has worked so hard every day to get better, and it definitely has shown. She is only a sophomore and the Wood team is lucky to have such a great player for another two years. I know she is going to be a great leader for the younger girls that will be coming in.” 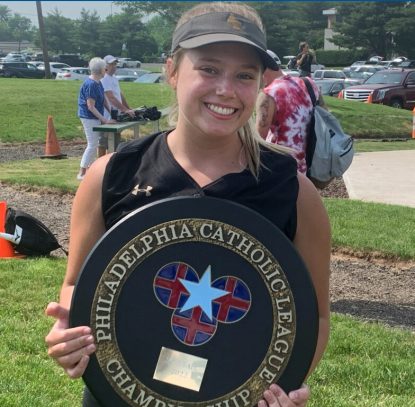 “Julia is the first one to practice and grabbing equipment and the first one to thank her coaches once practice or a game is done,” said Ecker. “She puts in the work both on the field and in the classroom. My conversations with Julia are never just about her, but about the team and the team’s success. Julia will do what she can do to get better and always has a smile on her face while doing it.”

After celebrating a 2021 Catholic League basketball championship and a subsequent PIAA Class 4A state title, Yogis decided to nix playing basketball after her freshman season.

Instead, she became the Vikings’ team manager and was ultimately able to celebrate another state championship two months ago.

Hey, anything she can do.

“My first thought is that she is a great kid and a really nice person,” said McDonald. “I enjoyed coaching ‘Butter’ as we called her because her jump shot was butter for one season last year. I think she realized softball was more her sport and decided not to play basketball this season to focus on softball.

“We are grateful that she stuck with us as a manager, as she was a lot of help to us and fun to be around. The girls all love her, too. She has now been a part of two PCL titles and two state titles at Wood in two years and has a shot at a softball state title.

After Wood’s softball team used a five-inning no-hitter by Fanelli and a turnstile of runners crossing the plate to defeat Science Leadership Academy for the Class 4A District 12 title on their home field June 1, the Vikings were hanging around eating snacks and preparing to watch St. Hubert’s take on – and later defeat – Central in the Class 6A bout.

Wood athletic director Sue O’Neill was preparing to announce the starting lineups and Yogis asked if she could do it instead.

A former Wood assistant coach still called “Coach Sue” by the Viking players, O’Neill immediately accepted the offer and the pair huddled together for several minutes making sure of the pronunciation of each player’s name.

A few minutes later, Yogis took the microphone and, undaunted, broadcast each name with appropriate pausing and confident articulation. 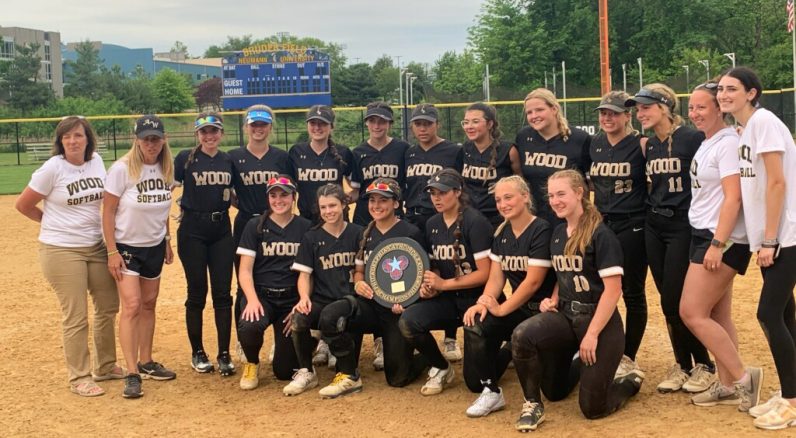 The Lady Vikings pose for a team photo after capturing the PCL championship May 23. (John Knebels)

PREVIOUS: Graduating athletes ready to play in college next year