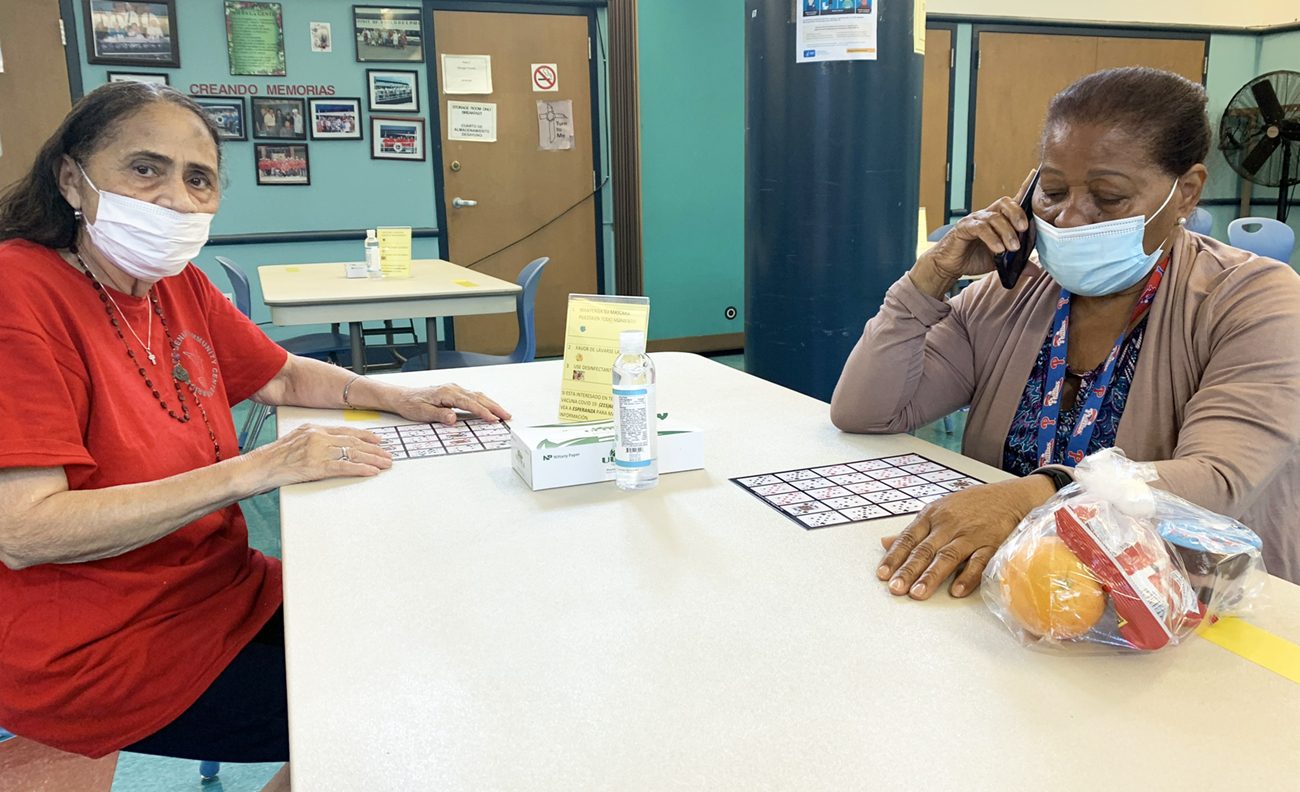 Andrea Lopez (left) and a companion prepare to enjoy a game of bingo at the archdiocesan Norris Square Senior Community Center in Philadelphia, June 28, 2021. Senior centers and other archdiocesan outreaches have become refuges as the region battles a July 2022 heat emergency. (Gina Christian)

As some 100 million in the U.S. grapple with a dangerous heat wave, archdiocesan agencies are helping their clients stay safe and cool.

Temperatures in the Philadelphia region this week have spiked well into the 90s, with the thermometer set to hit 100 this weekend. On July 20, Philadelphia’s Department of Public Health declared a heat health emergency, urging residents to take extra precautions against the extreme conditions.

Heat can be especially deadly for vulnerable populations, including seniors and those experiencing homelessness, said agency leaders with archdiocesan Catholic Human Services.

“Older adults have difficulty adjusting to extreme temperatures, compounded by side effects of medications they take and medical conditions that can compromise the way their bodies can respond to heat,” said Heather Huot, director of Catholic Housing and Community Services (CHCS), which provides a continuum of care to seniors throughout the five-county area.

With air quality diminished by heat and humidity, heart disease and respiratory conditions such as asthma and COPD (chronic obstructive pulmonary disease) “can make the heat even more difficult for seniors,” Huot said.

Users of street drugs “could be nodding off and not even know they’re overheating,” said Martin. “And when you don’t have any water, you don’t take your medications. So many of our clients have bipolar depression, and … they are showing up in an agitated state.”

Research has identified links between higher temperatures and aggressive behavior, something Martin has seen among his clients. 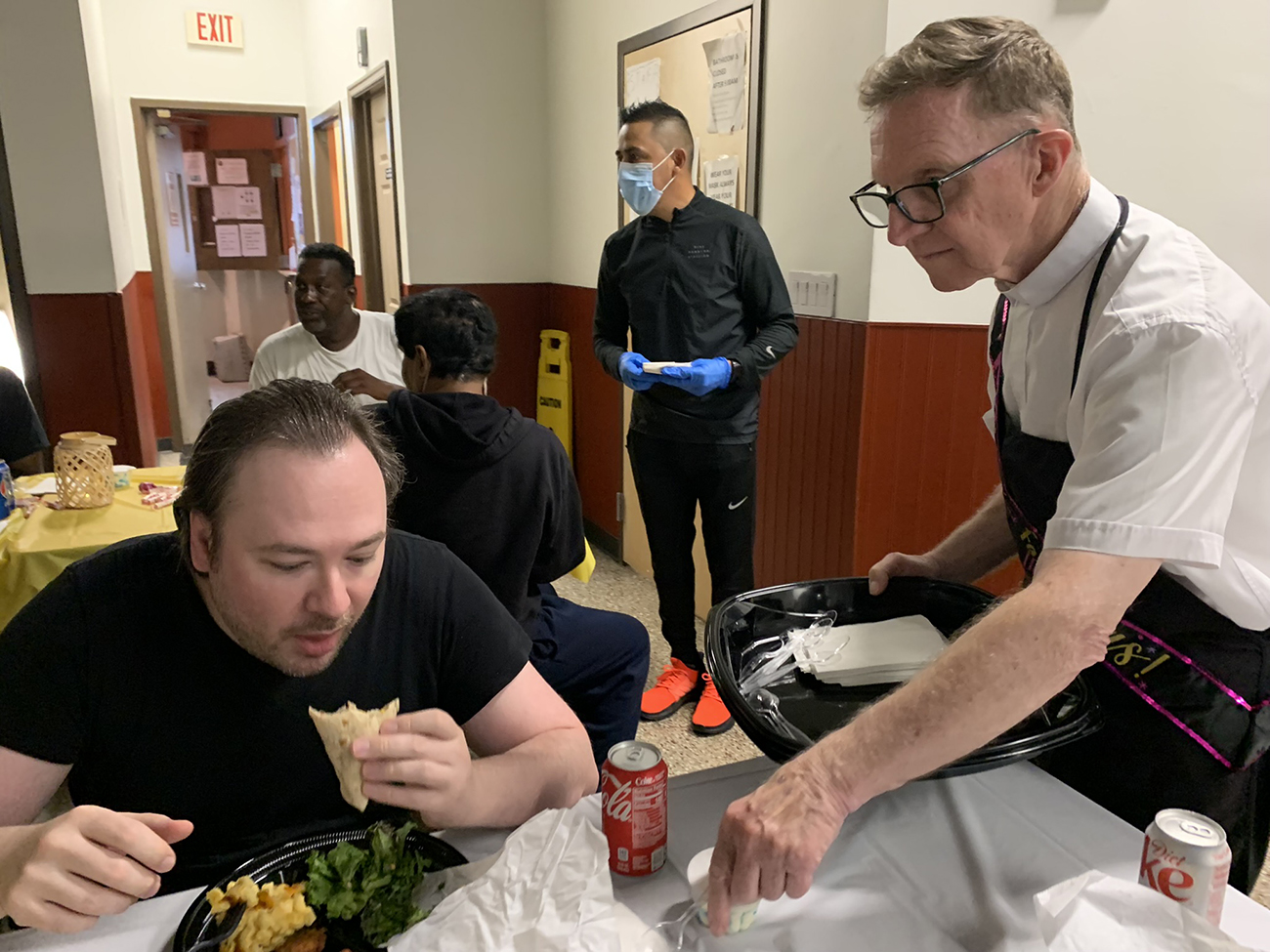 “It seems like this heat digs up old wounds, and they come back to fight old battles,” he said.

At the same time, a number of those in homelessness “refuse to go into shelter” when city health officials declare a weather emergency, preferring instead to seek out tunnels and building overhangs, said Martin.

He and his staff “always have water in our doorway” for clients, and Huot and her team also work to keep seniors hydrated in the heat.

Huot also urges seniors “drink water consistently throughout the day,” without waiting until they are thirsty, and to take cool baths and showers whenever possible.

Purello said refreshing, unheated foods such as salad, fruit and canned tuna with crackers are also on the menu at CHCS centers, many of which have extended their hours to provide greater access to safe, air-conditioned spaces for seniors.

At the same time, some regulars are finding themselves homebound from the heat “because it is too hot to walk to the centers,” Purello said.

Seniors trying to navigate the heatwave from home need to be especially vigilant, said Huot.

“Closed houses are very dangerous,” she said. “If you don’t have air conditioning, open your windows and get a box fan to pull air in and circulate it. You don’t want to just be circulating the hot air that’s inside your house.”

She urged seniors without any access air conditioning – even at public spaces such as senior centers, malls, libraries and theaters — to call the Philadelphia Corporation for Aging (PCA) Helpline at 215-765-9040.

Although seniors are usually encouraged to stay active, heat waves are a time for conserving energy, said Huot.

“Take it easy and rest,” she said. “Don’t engage in strenuous activities. This isn’t the time to weed your garden or run your vacuum.”

Frazzled nerves from scorching temperatures can be soothed by simple acts of kindness, said Martin.

“The love that we impart is the only things that really deescalates things on hot days like these,” he said. “You don’t have to say anything; you can just hand someone water or a bag of food. We have some very tender moments out there, and some guys are so grateful they just want to hug you.”