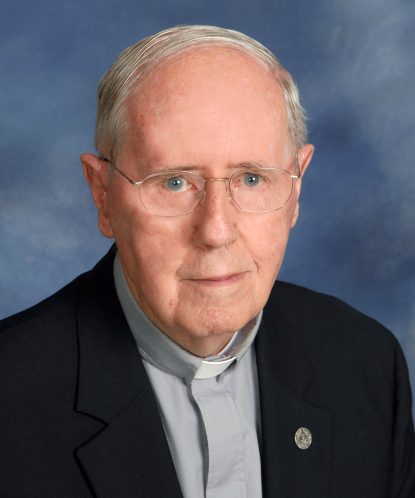 Born in Phoenixville, the son of the late John D. and Doris Kane (nee Piersol), he was the second oldest of eight children. He attended St. Ann Catholic School, Phoenixville. The family later moved to Springfield, Delaware County and Deacon Kane attended West Catholic High School for Boys, graduating in 1947.

He then served in the United States Army for two years. After his honorable discharge in 1949, he attended Villanova University from which he graduated in 1953 with a B.S. in economics.

He married Mary Theresa McCullough on Oct. 11, 1958 and they raised four children in Springfield.

After formation in the Archdiocese of Philadelphia’s permanent diaconate program, Deacon Kane was ordained by Cardinal Anthony Bevilacqua on June 2, 1991 at the Cathedral Basilica of SS. Peter and Paul. He was assigned to St. Francis of Assisi Parish in Springfield where he remained until his retirement in 2010.

Deacon Kane was self-employed as a Certified Public Accountant and general insurance agent. He eventually became president of his own pension planning business, Corporate Pension Planning, and worked from his home office until the age of 87.

He is survived by his wife Mary, to whom he was married for more than 63 years. He is also survived by four children, Maryanne, James Jr., Margaret Mary and Ave Maria; and two sisters, Sister Doris Kane, I.H.M. and Kathleen Kane Vasko; eight grandchildren and nine great-grandchildren, plus two on the way.

Interment will be at SS. Peter and Paul Cemetery, 1600 South Sproul Road, Springfield.