Sister Joan Ann Koliss, OSF, 80, died in Roxborough Memorial Hospital on July 12, 2022. She had been a professed member of the Sisters of St. Francis of Philadelphia for 59 years. 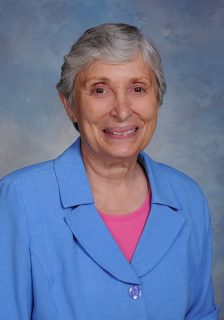 Sister Joan was born in Orange, New Jersey, but later her family moved to Maryland where she was a member of Immaculate Conception Parish and a graduate of Towson Catholic High School. She entered the congregation in 1960 and professed her first vows in 1963. She earned her bachelor’s degree in English from Neumann University, a master’s degree in religious studies from Saint Michael’s College, and a master’s in spirituality from Creighton University. Sister Joan ministered primarily in education and pastoral and social services. She was certified in spiritual direction. In 2006 she was awarded the Granite State Award from the New Hampshire Council of the Knights of Columbus for her outreach work.

Sister Joan served for 20 years in the Diocese of Trenton, where she taught at Immaculate Conception School, Holy Angels School, and St. Raphael’s School. She also worked for eight years as associate pastor at St. Mary’s Parish in Colt’s Neck.

During her 15 years in the Archdiocese of Philadelphia, Sister Joan served as coordinator of the Institute of Study at Neumann University and on the congregation’s general council from 1986-1996. In later years, Sister Joan worked as a volunteer at Red Hill Farm. Since 2019, she served in prayer and hospitality ministry in Assisi House, where she lived at the time of her death.

Sister Joan spent eight years in New Hampshire, serving as the director of the Corpus Christi Food Bank and Assistance Program in Nashua collaborating with other service agencies to help families in crisis. She also served for six years in the Washington, DC, Diocese, in social service and family life ministry at the Crossway Community in Kensington and at Wider Opportunities for Women in Washington.

Additional ministry includes four years in the Wilmington Diocese, as a daycare center worker at Friendship House in Wilmington; two years teaching at St. Mary School in York in the Diocese of Harrisburg; one year at St. Nicholas School in Egg Harbor, New Jersey, in the Diocese of Camden. She also spent three years as a caregiver.

All services will be held in Assisi House, 600 Red Hill Road, Aston, Pennsylvania, on Tuesday, July 19 and will be livestreamed. A Christian Wake Service will be held at 9:30 A.M. followed by viewing. Mass of Christian Burial will be at 11 A.M. Burial will be in Our Lady of Angels Cemetery in Aston. Sister Joan is survived by her brother Thomas, her sister-in-law Carolyn, her cousin Fran, several nieces and nephews and their families, and her Franciscan family.