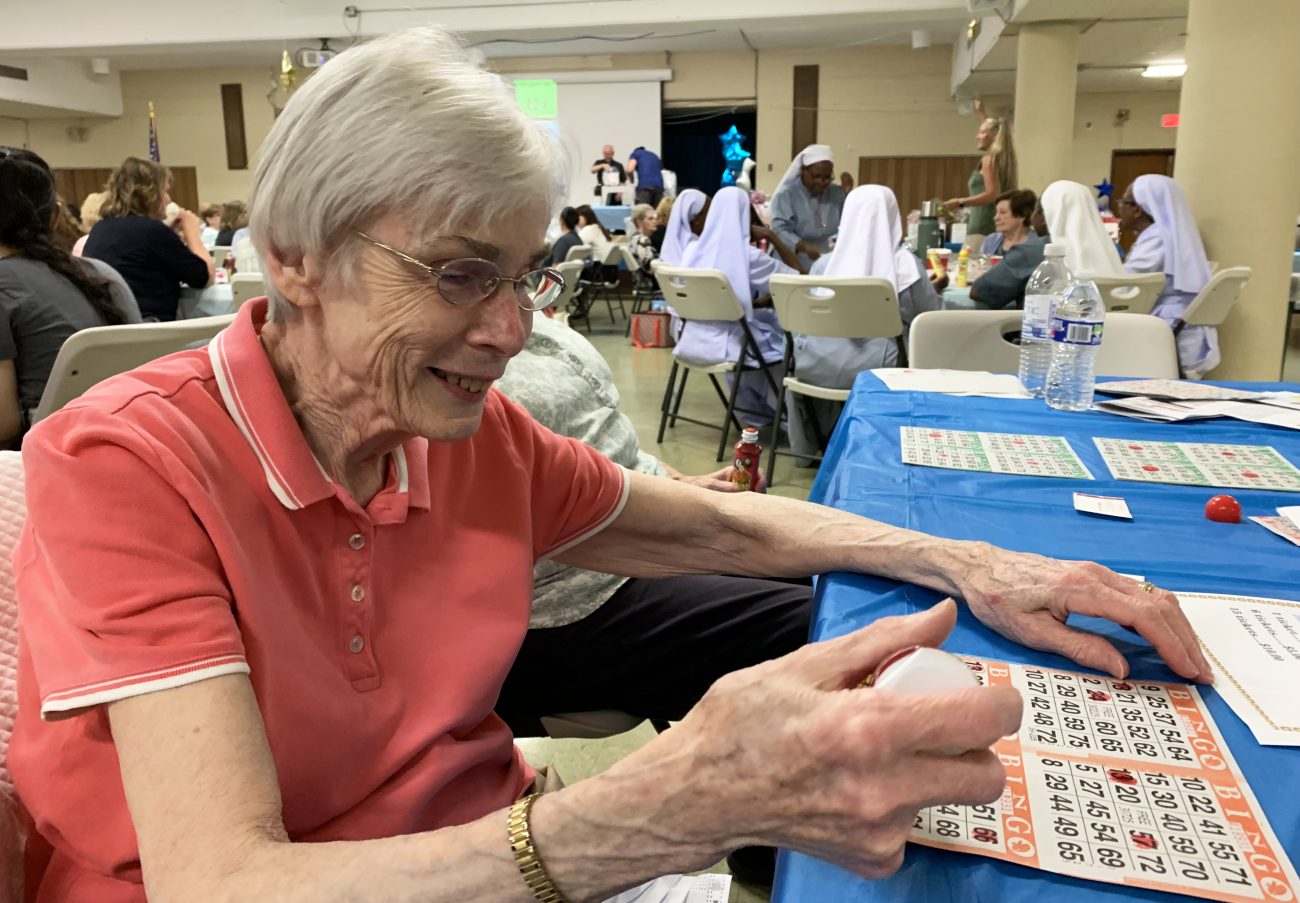 Susan Reynolds marks her cards at an Aug. 5 designer bag bingo night hosted by Presentation B.V.M. Parish in Cheltenham, which raised an estimated $6,000 for the Sisters of St. Joseph of Mombasa, Kenya. (Gina Christian)

A Montgomery County parish is helping to spread the Gospel in Africa – with a little help from the fashion industry.

Father William Harrison, pastor of Presentation B.V.M. Parish in Cheltenham, was the caller for an Aug. 5 designer bag bingo night that drew an estimated 130 players – including five Sisters of St. Joseph of Mombasa, Kenya, whose order was the evening’s beneficiary.

“This is a new experience for us. We’ve never actually played bingo,” admitted Sister Francesca Mumbua, director of religious education at Our Lady of Miracles Church in Brooklyn, New York.

Proceeds from both game tickets and donated prizes, which ranged in value from $275 to over $500, will help her order to “evangelize the people of God” back home in Kenya, she said.

Last year’s inaugural bingo for the sisters – two of whom are in residence at the parish — netted over $5000, and the funds go a long way, said Father Harrison.

“When it goes to Africa, you can multiply it by six times,” he told attendees prior to drawing the first number.

Sister Francesca agreed, noting the previous collection purchased “computers, laptops and projectors” for a number of the schools and vocational training centers operated by her order in Kenya.

“We are trying to be an IT community, but the congregation cannot afford (these items) in the schools,” she said.

Education is central to the mission of the order, which was founded in 1929 and has grown from its original four members to 302 sisters, with close to three dozen young women in formation. The congregation has also established 14 health centers throughout Kenya to counter HIV/AIDS, malaria and measles.

And although the order is based some 8,600 miles away, its work is close to the heart of Presentation B.V.M. coordinator of religious education Mary Ciamaichelo, who along with her husband Frank and the parish’s rosary club members launched the bingo benefit. 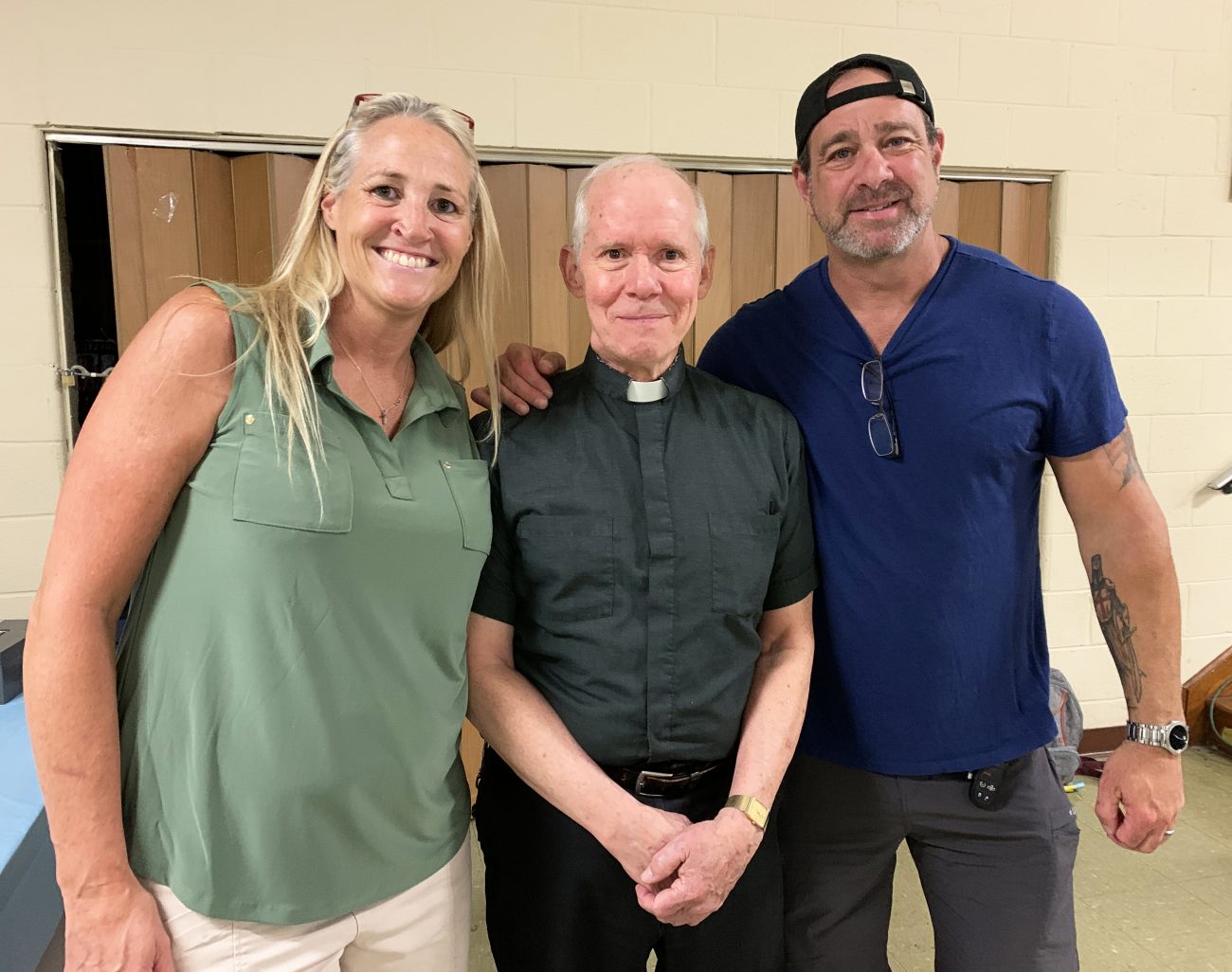 With their pastor Father William Harrison calling the numbers, Mary and Frank Ciamaichelo launched an annual designer bag bingo at Presentation B.V.M. Parish in Cheltenham to benefit the Sisters of St. Joseph of Mombasa. (Gina Christian)

Due to family obligations, the Ciamaichelos had to decline a 2021 invitation from the sisters to mission with them in Kenya. Instead, Mary turned to a tried-and-true fundraising strategy to support the order’s work.

“We were just sitting around, and I said, ‘How about a bingo night?’” she said. “And it just exploded.”

Tracing its roots to 16th-century Italy, bingo has long been a part of Catholic parish life in the U.S., surviving a brief ban by the Archdiocese of New York during the 20th century to evolve into numerous theme-oriented competitions in recent years.

Ciamaichelo said her own family has had “great luck” with designer bag bingo, and with virtually no overhead – “we get everything donated; all the bags, all the baskets” – the match at Presentation hit its numbers in style: the tally from last week’s event is an estimated $6,000.

Between rounds, parishioner Susan Reynolds said all those ink-dabbed bingo cards added up to “fun for a good cause.”

And while she might not have fancied a high-end purse, the Blessed Mother would likely have approved of the players’ efforts to win one for the sisters, said Mary Ciamaichelo.

“I think she would be elated,” she said.

Several Sisters of St. Joseph of Mombasa played their own cards at an Aug. 5 designer bag bingo game hosted by Presentation B.V.M. Parish in Cheltenham to benefit their order. (Gina Christian)

PREVIOUS: Philly saint a ‘disciple of the Eucharist,’ says pastor

NEXT: Archdiocesan summer camp gives kids ‘a bit of heaven on earth’