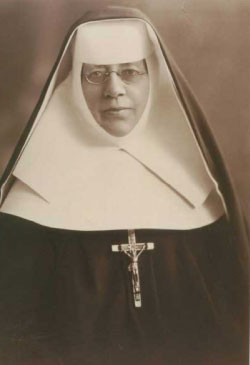 A Philadelphia-born saint was a “disciple of the Eucharist” and a “powerful reminder” of the sacrament’s centrality to the Catholic faith, said an archdiocesan priest.

Father Dennis Gill reflected on the life and legacy of St. Katharine Drexel during an Aug. 2 noontime Mass at the Cathedral Basilica of SS. Peter and Paul, where he is pastor and rector. The liturgy marked the fourth anniversary of the relocation – or, in canon law terminology, “translation” – of the saint’s sacred remains to the cathedral.

Members of the saint’s congregation joined some 130 faithful for the Aug. 2 Mass, which was followed by a veneration of the saint at her tomb.

While admitting the occasion was a bittersweet one, the new location of the shrine — construction for which was funded by the Connelly Foundation — has ultimately been “a blessing,” said Sister Donna Breslin.

“(St. Katharine) is now known by so many more people who come to the city, and who maybe would not have been able to come up to Bensalem to visit the (former) shrine,” she said. “When you think of all the different groups that come through here, the conventions and conferences, it has allowed many more people to come to know who St. Katharine Drexel was, and it has helped to spread her mission and her message to the wider community, as well as to the wider church.”

That mission was firmly rooted in Christ himself, said Father Gill.

St. Katharine Drexel, who traded the life of an heiress for one of religious service, “recognized that the Eucharist is for every one of us in the church,” he said. “It is as if Jesus was saying to her, every time he encountered her in the Eucharist, what he said to his disciples … ‘Take courage; it is I. Do not be afraid.’”

#Philly girl St. Katharine Drexel celebrated her shrine’s fourth anniversary at the ⁦@CathedralPhila⁩ earlier today, with faithful gathering at her tomb following Mass to pray for her intercession – and for a renewed devotion to the #Eucharist.

Such reassurance is acutely needed in the “very different and strange times” of the present, Father Gill added.

Amid the challenges of her own era – including the Great Depression, World War II and the violent campaigns of the Ku Klux Klan — St. Katharine Drexel established numerous schools and foundations across the country, all ministering to the Native American and Black populations.

The Eucharist enabled her to do so, said Sister Donna.

“It was what set her on fire,” she said. “She would spend hours in the chapel in prayer before the Blessed Sacrament, and … it was what gave her the ability to see the world in a way that many of us can’t, to see the connection of all of us together as God’s children.”

The saint’s seamless blending of contemplation and action was developed early in life. Her wealthy banking family maintained a private chapel and observed daily prayer together, while opening their home three days a week to provide food, clothing, medicine and rent money to those in need.

“There was no separation for her. Everybody had to be at the table,” said Sister Donna. “And if some group was missing from the table, then the church was just not complete.”

St. Katharine imparted a deeply eucharistic spirituality in her fellow sisters, she said.

The tangibility of the Blessed Sacrament is reflected in the church’s theology of sacred remains and relics, said Father Gill, noting that the church has historically celebrated the translation of remains with great joy.

“When we are near to (saints’) sacred remains, we are tethered to heaven,” he said. “It is a reminder to us that the one who is now in glory holds out to each of us the same hope.”

And visitors often look to grasp that opportunity, said assistant shrine director Beth Racine, who sees many “pray with their hands on the tomb.”

Above all, the anniversary celebration was “a reminder of our call to live the Eucharist,” said Sister of the Blessed Sacrament Stephanie Henry, the congregation’s newly elected president. “We continue to walk in the footsteps of our foundress, and it’s a beautiful journey.” 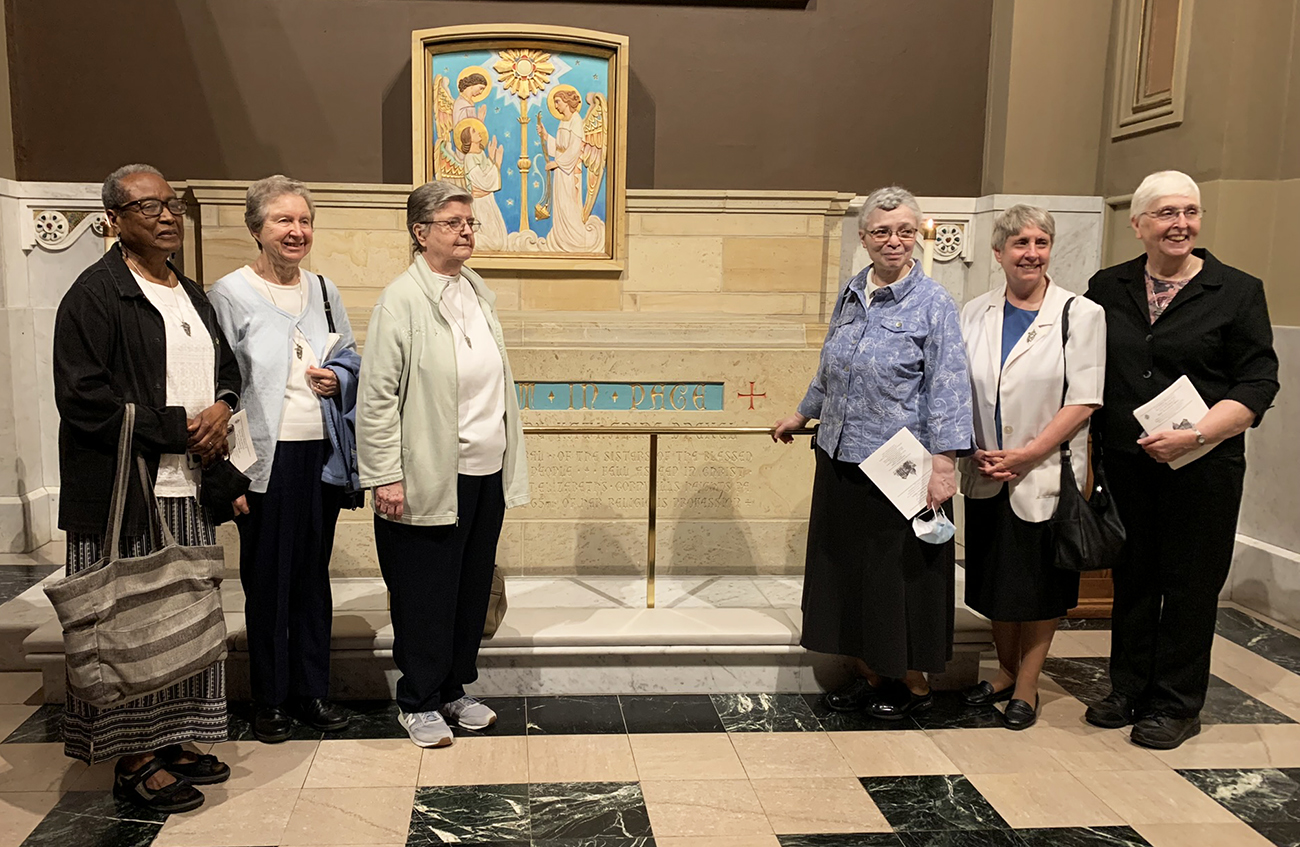 Sisters of the Blessed Sacrament gather at the tomb of their foundress, St. Katharine Drexel, following an Aug. 2 Mass commemorating the fourth anniversary of her shrine’s relocation to the Cathedral Basilica of SS. Peter and Paul. (Gina Christian)

NEXT: Designer bag bingo helps spread the Gospel in Kenya