Barbara was born on September 9, 1939 in Bridgeport, PA. Sister’s parents 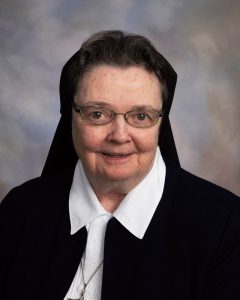 Sister Barbara entered the Community on February 11, 1959; she received her habit and her religious name Sister M. Paul Catherine on August 17, 1959 (in the late 80s Sister returned to her baptismal name). Sister pronounced First Vows on August 17, 1961.

For the next twenty-three years of her ministry (1981-2004), Sister served the Motherhouse Community in many and varied ways, chief among them hospitality. Sister Paul Catherine took care of our two resident priests – Bishop Martin Lohmuller and our chaplain Reverend Joseph McLaughlin O.Praem. Sister was gracious and loving as she ministered to our priests and all here at Villa Maria House of Studies.

In August 2004, Sister Barbara went to serve our Sisters at Camilla Hall as a staff member. Sister worked diligently in the Pharmacy Department for a number of years. Sister also served as a driver – a much-needed service. During the course of Sister’s ministry in Camilla (2004 – 2022), she never lost the zest and joy of generosity throughout Camilla. In the end, Sister’s death was sudden. She returned to the Lord with heart and hands full.