Sister Marie Peter Conboy died in Camilla Hall on July 26, 2022 in the 74th year of her religious life. 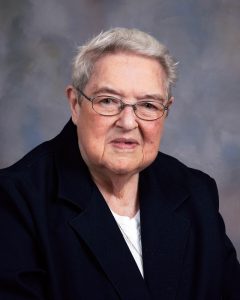 In the fall of 1987 through June 1991, Sister Marie Peter served as the librarian at St. Thomas School in Philadelphia. In the fall of 1991 through October 1994, Sister taught students (Adult Literacy) in the GED/ESL Programs at North Light, Inc. Sister Marie Peter transitioned from teaching students to hands on caring at the Hospice Center serving patients at Nazareth/Holy Redeemer Hospitals from October 1994 through August 2000. Sister continued this ministry at St. Francis Country House as a Pastoral Caregiver until August 2004. Sister then served as a Hospital Visitor at Fitzgerald-Mercy Hospital from August 2004 through August 2007.