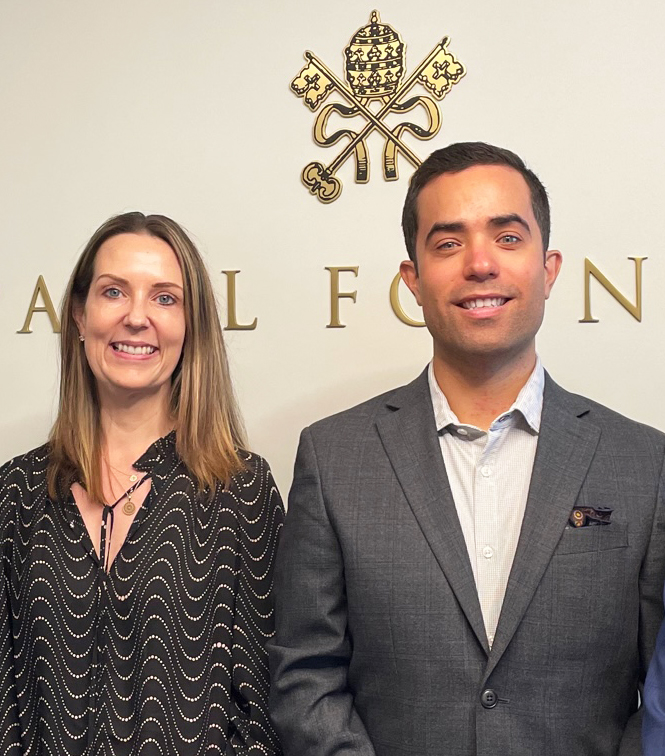 In an Aug. 10 announcement by the foundation, Sharon Kucia and Ian Rangel were named Vice Presidents of Steward Development, respectively serving the nation’s Midwestern and Western regions.

In their roles, the two will invite Catholic philanthropists across the country to become Stewards of St. Peter, a select group committed to supporting foundation projects and initiatives.

Established in 1988, the Chester-based foundation is the only one in the U.S. exclusively dedicated to fulfilling the requests of the Holy Father for the needs of the Church.

With more than $200 million in grants awarded to date, The Papal Foundation focuses on serving the poor in developing nations by building churches, schools and hospitals; countering hunger, abuse and trafficking; and offering the hope of the Gospel message.

The foundation later announced the approval of $14 million in grants, scholarships and humanitarian aid for international distribution, including more than $9 million in grants requested by the Vatican for 123 projects in 64 countries.

“Our board of trustees is committed to increasing the foundation’s service to the church by growing its community of Stewards of St. Peter and its charity to the poor,” said executive director David Savage. “The addition of Sharon and Ian to the Foundation’s team is an important step in our plan to expand the foundation’s impact around the world.”

Board president Eustace Mita pointed to the pair’s “breadth of experience and philanthropic expertise, coupled with a genuine love of the Faith and authentic leadership qualities.”

Over the past two decades, Kucia has spearheaded major gift initiatives in the Archdioceses of Milwaukee, Chicago, and Indianapolis, raising more than $700 million in general — $175 million specifically for Catholic education — for upwards of 1500 Catholic organizations. A founding member and president of the Charlotte chapter of Legatus, Kucia serves on the board of St. Joseph College Seminary.

“I look forward to bringing my expertise in nonprofit strategy and philanthropic business development to The Papal Foundation, supporting the needs of families, widows, orphans and children in developing nations around the world,” she said.

Rangel was recently selected for the inaugural cohort of the Mathis Liturgical Leadership Program, an executive leadership initiative at the University of Notre Dame’s McGrath Institute for Church Life.

“I am excited and blessed to join The Papal Foundation, answering God’s call to serve our most vulnerable brothers and sisters,” he said. “I am passionate about helping people experience the joy God provides when they invest in the works of the universal church.”

Jim Coffey, The Papal Foundation’s senior vice president of development, welcomed Kucia and Rangel — and the team is ready to roll up its sleeves, he added.

“I am excited to work with Sharon and Ian to ramp up outreach to Catholic leaders across the country and grow the foundation’s resources to help the Holy Father and the Church,” he said.