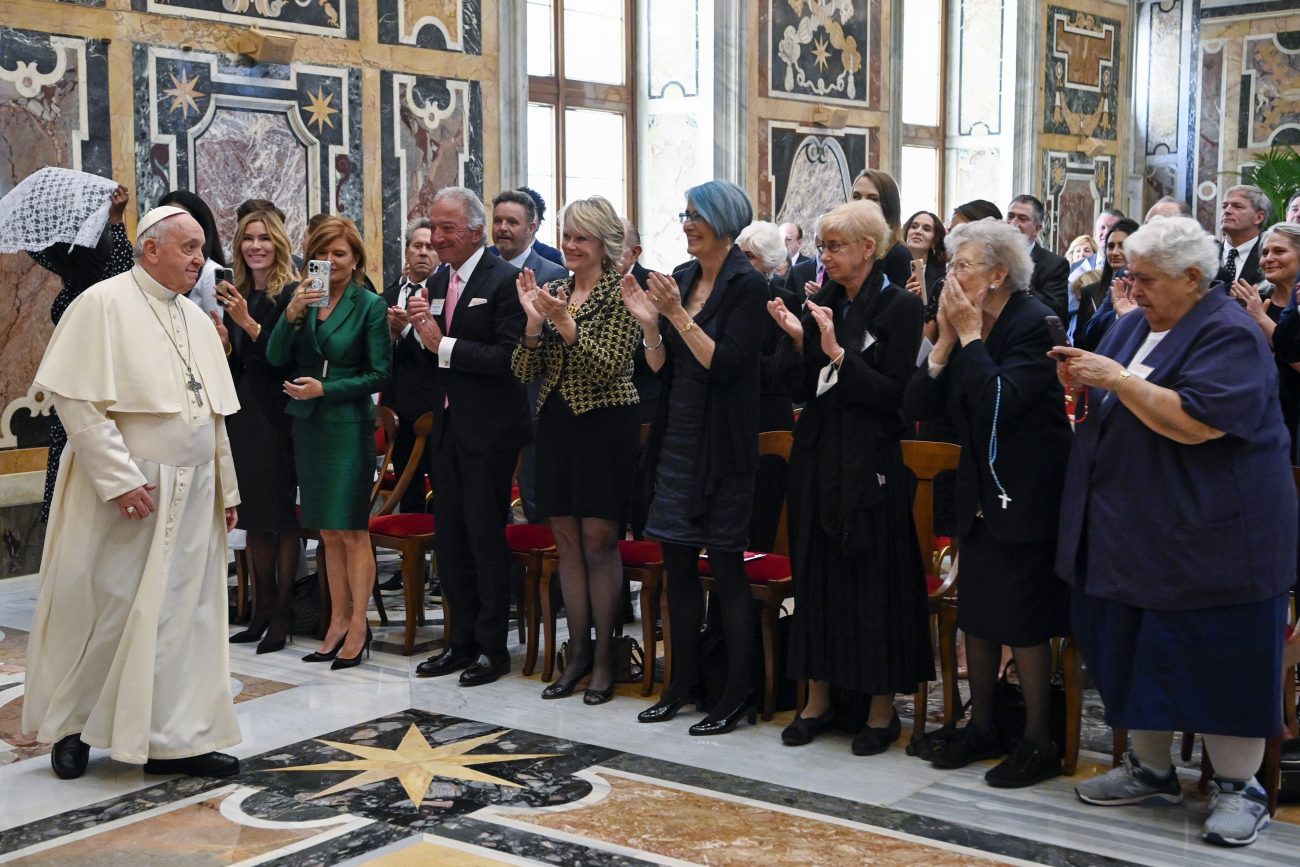 Pope Francis arrives to lead an audience with members of the U.S.-based Papal Foundation at the Vatican April 28, 2022. The pope praised the group for its generosity in helping fund humanitarian and church projects around the world. (CNS photo/Vatican Media)

VATICAN CITY (CNS) — Pope Francis praised members of the U.S.-based Papal Foundation for helping the Catholic Church build “a culture of solidarity and peace,” including by providing assistance to victims of the war in Ukraine.

“As we are witnessing in these days the devastating effects of war and conflict, you increasingly see the need to provide care and humanitarian assistance to its victims, to refugees and to those forced to leave their homelands in search of a better and more secure future for themselves and their loved ones,” the pope told members of the foundation April 28.

“Your work helps to bring the love, hope and mercy that the Gospel proclaims to all who benefit from your generosity and commitment,” the pope told the foundation’s major donors, who are called Stewards of St. Peter, and members of the board of trustees.

Although the six active American cardinals resident in the United States are part of the foundation’s board, only Cardinals Seán P. O’Malley of Boston and Timothy M. Dolan of New York were part of the group’s pilgrimage to Rome.

The foundation, he said, has provided funds to the Ukrainian Catholic Church “to assist with emergency relief efforts.”

After the meeting with the pope, the foundation announced the approval of $14 million in grants, scholarships and humanitarian aid that will be distributed throughout the world.

The amount included more than $9 million in grants requested by the Vatican for 123 projects in 64 countries, the foundation said. 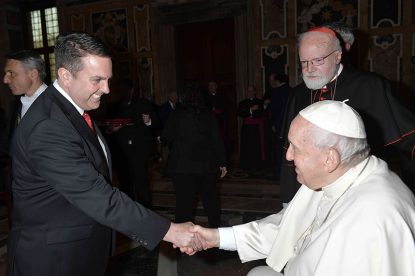 Pope Francis meets David Savage, executive director of the Papal Foundation, April 28 at the Vatican. Also shown is Cardinal Sean O’Malley, chair of the foundation’s Board of Trustees.

Since its founding in 1988, the Papal Foundation and its Stewards of St. Peter have allocated more than $200 million in grants and scholarships around the world to more than 2,000 projects selected according to priorities set by the pope.

The group’s 2021 report highlighted the foundation’s help to build a center for faith formation in Burundi, the construction of an orphanage in the Philippines, the renovation of a retreat house in Chile and the expansion of a church-run health center in Rwanda.

The scholarships provided by the foundation enable close to 100 priests, religious sisters, religious brothers and laity to study at one of the pontifical universities in Rome.

“From its inception,” the pope told the foundation members, “solidarity with the successor of Peter has been a hallmark of the Papal Foundation. I ask you, please, to pray for me and for my ministry, for the needs of the church, the spread of the Gospel and the conversion of hearts.”

The Papal Foundation is based in Chester, Pa. Learn more at ThePapalFoundation.org.

NEXT: Training on dementia sought for pastoral ministers