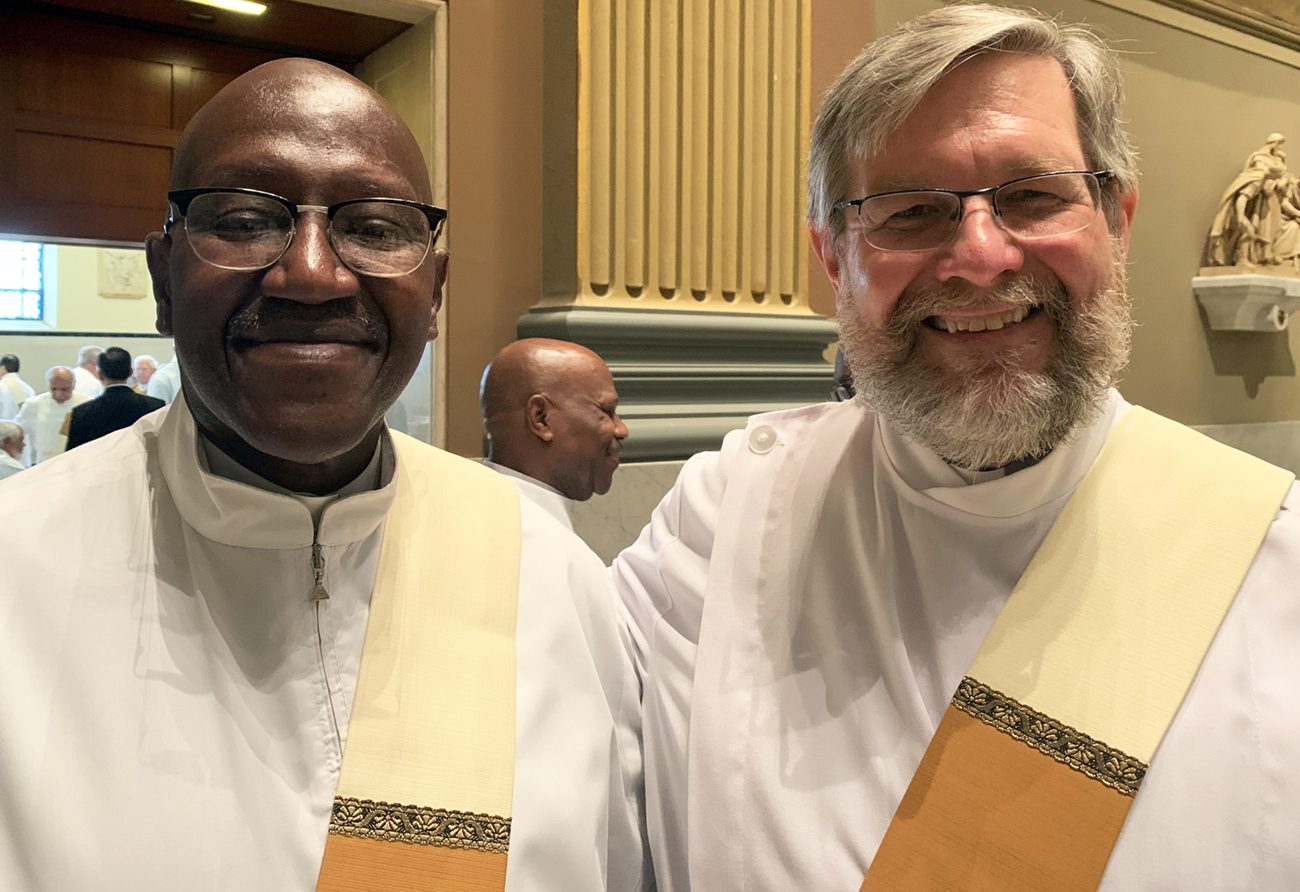 Now established in their ministries, permanent Deacons Anthony Willoughby (left) and Franz Fruehwald (right) -- seen here in this June 14, 2021 photos -- said the permanent diaconate is a sign of both grace and witness. (Gina Christian)

An archdiocesan initiative is inviting men to consider whether they have the heart and the calling to serve as permanent deacons.

On Sept. 22, the Office of Permanent Deacons premiered “Called to Service,” a short documentary on the permanent diaconate in Philadelphia, during an information night for potential candidates. Produced by Emmy Award-winning Joyful Films, the nine-minute video features several permanent deacons sharing their insights on their ministry – a vocation that has become more vital than ever, said Deacon Michael Pascarella, Jr., associate to the archdiocesan vicar for clergy.

As ordained members of the clergy, permanent deacons are “configured to Christ the Servant … who acts through (them),” said Deacon Pascarella.

Tracing its roots to the early church (as described in Acts 6:1-7), the ministry was after several centuries of decline restored to its current state by the Second Vatican Council, and now spans a number of functions, from proclaiming and preaching Scripture to administering certain sacraments.

Specifically, permanent deacons are ordinary ministers of baptism and of holy Communion (although they cannot consecrate the bread and wine), while assisting bishops and priests at Mass and funerals. Permanent deacons are also authorized to proclaim, preach and teach Scripture; impart a number of blessings; expose the Blessed Sacrament for eucharistic adoration; validly officiate at a Catholic marriage ceremony; lead the community in prayer and sacramental liturgies; minister to the sick and dying; and exercise administrative leadership in the church.

In accord with canon law, permanent deacons may be single or married, with the former vowing to remain as such for life at the time of their ordination. A married permanent deacon also promises not to remarry if his wife predeceases him.

Wives of married permanent deacons provide significant support to their husband’s ministry, and during the first year of diaconal formation, or aspirancy, “wives are required to participate in everything unless excused for medical reasons or work,” said Deacon Pascarella. “After that, participation is highly encouraged but not mandated. We want the wives to be fully aware of what they’re getting into.”

(Watch “Called to Service: The Permanent Diaconate” by Joyful Films.)

At the same time, he said, “there has to be a balance between the diaconate and marriage,” although the demands of the permanent diaconate often prompt bishops – including Archbishop Nelson Pérez and his predecessor, retired Archbishop Charles Chaput – to routinely thank wives for “sharing their husbands with the church,” he added.

The archdiocese is home to some 300 permanent deacons, with “about 200 actively assigned to a parish or diocesan ministry,” said Deacon Pascarella.

The remaining third are either retired or unable to actively serve due to illness, he said – and on balance, almost all of them are over the age of 50, a trend confirmed by Jesuit Father Thomas Gaunt, executive director of the Center for Applied Research in the Apostolate (CARA) at Georgetown University.

“The big picture is that we’re experiencing a larger number of deacons who are either dying or retiring from active ministry, than we have being ordained each year,” said Father Gaunt, whose office recently published a statistical overview on Catholic permanent deacons in the U.S.

Deacon Pascarella noted that he personally had helped “bury about 10 permanent deacons since last November.”

COVID may have reduced the numbers of applicants to permanent diaconate programs, said Father Gaunt.

Yet he cautioned against drawing any firm conclusions about trends in the permanent diaconate without further research.

“We’re just not sure right now how much the pandemic has had an immediate impact,” he said.

Another consideration is a possible “market correction” due to a surge of interest in the permanent diaconate when the vocation was first revived after Vatican II.

“We may have had some of the peak years two decades ago, and now it’s balancing out some,” said Father Gaunt.

In the Philadelphia Archdiocese, those interested in the permanent diaconate can find themselves daunted by the length and intensity of the formation program, which adds up to six or seven years of challenging study at St. Charles Borromeo Seminary’s School of Diaconal Formation in Wynnewood, said Deacon Pascarella.

“Some look at that and say, ‘I’ve been out of school for 20 years.’ But we know that, and most of us have been in that same situation,” said Deacon Pascarella, who spent 35 years in law enforcement.

His office provides generous tuition subsidies as well as “mentoring and formation team support,” he said.

The sacrifices and hardships of the ministry are outweighed by its blessings, he added.

“I’ve spent lots of time in hospitals, and it makes me uncomfortable sometimes, but it’s when I feel most like a deacon,” he said. “I’ve ministered to over 65 of my dying brothers and their families; wives, kids, grandkids. I’ve almost been brought to tears because of the power of Christ’s presence I feel in that moment. I say, ‘Lord, I know this is uncomfortable, but the cross was uncomfortable, and I know this is where you need me to be.’”

Deacon Pascarella recalled once being summoned to the phone in the middle of the night by an anguished daughter of a fellow deacon who had just died. Amid his own grief, he offered words of consolation and hope.

“This is who we are,” he said. “I’ll go down the line with my 300 deacons – they all have the same heart of Christ the Servant.”

The Archdiocese of Philadelphia’s Office of Permanent Deacons will host an information night on Dec. 5 at 7 p.m. at St. Mary Magdalen Parish in Media. For details and registration, visit the office’s website.

To watch “Called to Service,” visit the office’s website or Vimeo channel.