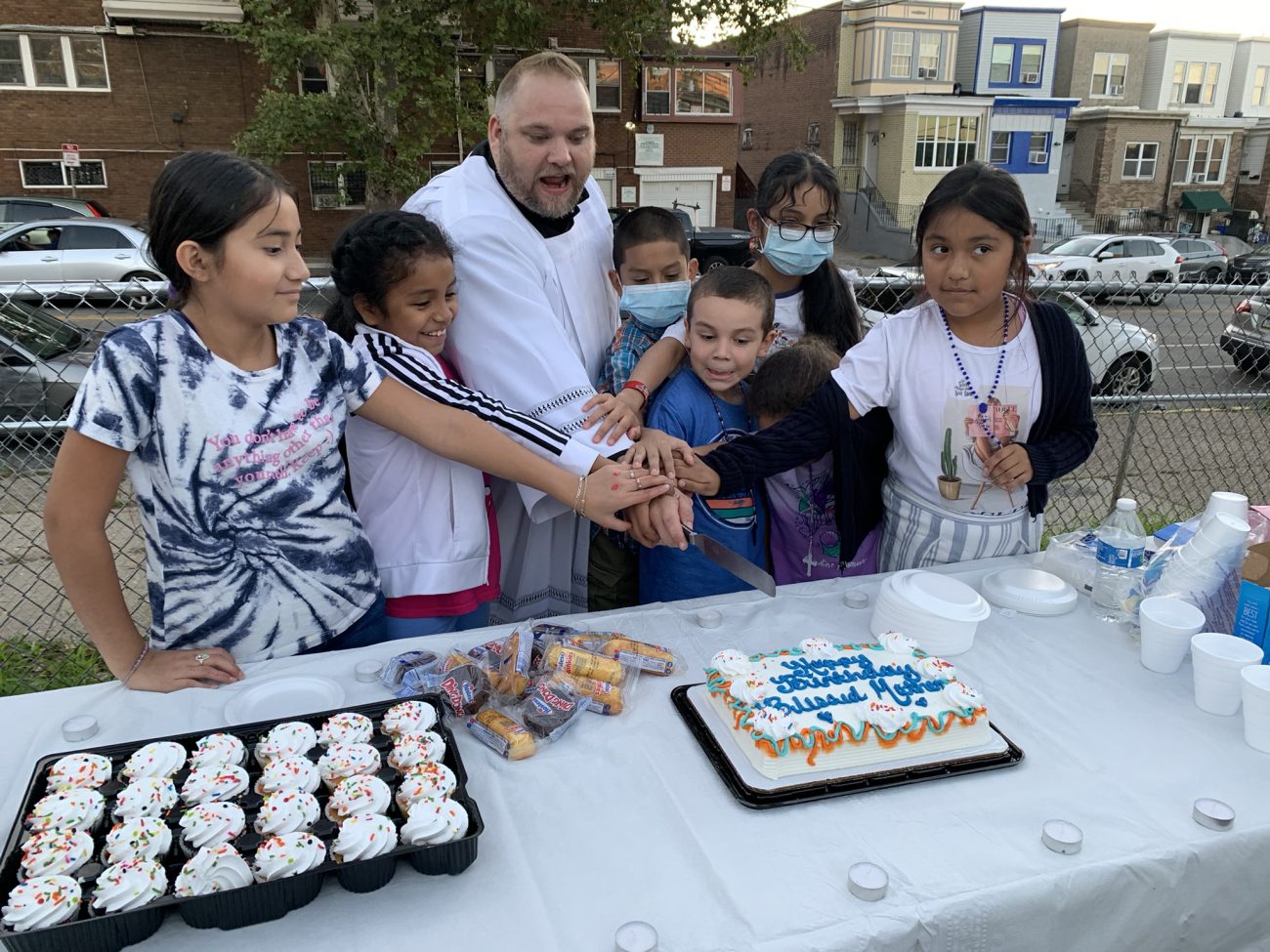 Father Charles Ravert (center), pastor of St. Ambrose Parish in Philadelphia, joins young parishioners in cutting a birthday cake for the Feast of the Nativity of Mary, Sept. 8. (Gina Christian)

Faithful in Northeast Philadelphia threw a birthday bash for a special lady: Mary, the Mother of God.

Some 30 gathered at St. Ambrose Parish to mark the Sept. 8 Feast of the Nativity of Mary, one of the most ancient Marian feasts in the church, and one of only three liturgical observances of birthdays on the Roman calendar, alongside those of Jesus and John the Baptist.

Led by pastor Father Charles Ravert, the outdoor gathering drew young and old alike for a recitation of the rosary in English and Spanish, Marian hymns and intercessory prayers.

“We rejoice and celebrate our Blessed Lady’s birthday,” said Father Ravert. “We do so in worship, with joy in our hearts, and … with faith especially in her intercession.”

“How about we sing for the birthday girl?” Father Charles Ravert of St. Ambrose Parish in ⁦@ArchPhilly⁩ threw a birthday bash for the Blessed Mother tonight, featuring an outdoor rosary, hymns and (of course) cake.

Father Ravert said the rosary was offered in particular for the people of Ukraine, now facing the seventh month of a brutal invasion by Russia; persecuted Catholics in Nicaragua, where clergy and others have recently been arrested and ministries closed by the federal administration; and for women in crisis pregnancies.

“We need to pray for the conversion of those who would seek and promote abortion, and we pray for the final end to the evil of abortion,” he said. “We pray especially for mothers who this very night … are suffering, standing in their rooms, looking into their mirrors right now scared to death. These women are suffering, and we need to have compassion on them and pray for them to make the right choice, to bring their babies into the world.”

He also invited faithful to ask Mary’s intercession for an end to violence in the city of Philadelphia.

The evening was also an opportunity to unveil a newly purchased statue of Our Lady of Fatima, purchased with funds from the parish 50-50 raffle.

At the end of the service, he issued another call to action: “How about we sing for the birthday girl?”

A heartfelt rendition of “Happy Birthday (Feliz Cumpleaños) followed, after which those on hand tucked into a birthday cake, decorated with the words “Happy Birthday, Blessed Mother.”

PREVIOUS: ‘Blessed to be the best,’ thanks to faithful donors

NEXT: Chester County parish remembers first responders of 9/11, and now