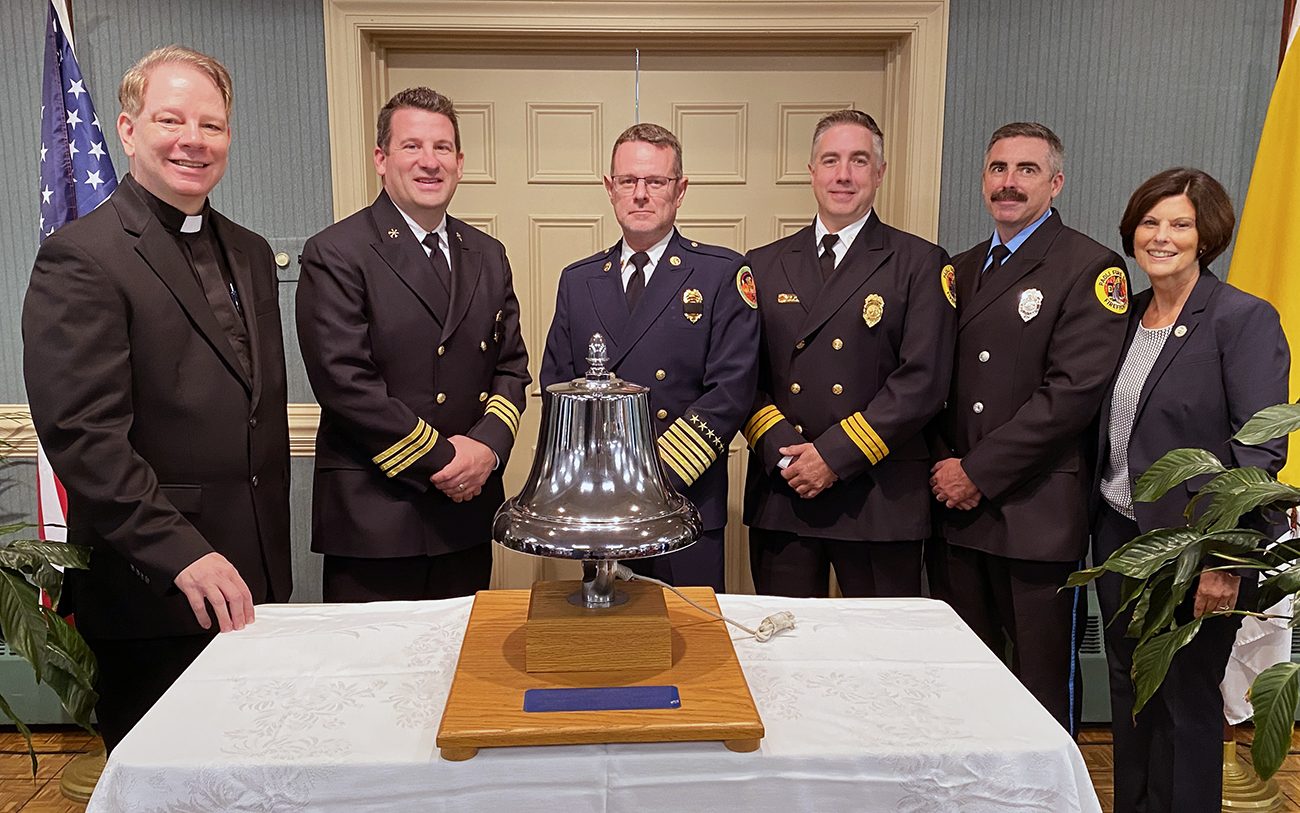 Father Stephen Moerman, pastor of St. Isaac Jogues Parish in Wayne, celebrated a Sept. 11 Blue Mass honoring the first responders who perished in the nation's worst terror attack, and those who continue to serve their communities today. (Joe Aquilante)

A Chester County parish honored first responders slain in the nation’s worst terror attacks, while honoring those who continue to “sacrifice to keep us safe,” said organizers.

Following the Mass, a bell-ringing ceremony — preceded by a procession led by the Tredyffrin Township Police Color Guard — commemorated Chester County first responders who had died over the past year. Tredyffrin police chaplain Rev. Scott Dorsey and Chief Joseph Maguire of the Radnor Fire Company led participants in the national police prayer and firefighter’s prayer, respectively.

Also offering remarks for the occasion were Marion Moskowitz, chair and Michelle Kichline, commissioner, of the Chester County Board of Commissioners; Julie Gosse, chair of the Tredyffrin Township Board of Supervisors; Roberta Hotinski, president of the Tredyffrin-Easttown School District board.

Both the Mass and the liturgy were sponsored by the parish’s Knights of Columbus Council 13716, and the tradition has been in place “since the 9/11 event” itself, said council Grand Knight Frank Schlupp

Fellow Knight Ed Sweeney “took it upon himself to organize” the Mass “when the attacks first happened,” said Schlupp.

Close to 3,000 died in the Sept. 11, 2001 attacks, when four teams of Islamic extremists hijacked commercial aircraft for a suicide mission that struck the World Trade Center in New York City and the Pentagon. A fourth plane, United Airlines Flight 93, crashed outside of Shanksville, Pa. after passengers overtook the hijackers.

Some 400 first responders were among the dead, and “we must remember the sacrifice made that day by those people, because the families they left behind definitely haven’t forgotten,” said Schlupp.

As the son of a Philadelphia police officer who spent 35 years on the force, Schlupp can still recall the anxiety he and his family experienced during each shift. His grandmother “bought a police scanner and listened for radio calls,” he said.

“We have men and women doing that (work) day in and day out,” said Schlupp. “And it also affects their families.

Yet such selflessness “is very Christian in its origin,” he said. “It’s that willingness to sacrifice for the other, which is exactly what Christ did for us on the cross. When firefighters were running into those burning buildings, they knowingly put their lives on the line, in the hope of saving lives,” he said.

By fostering a spirit of sacrifice, the Catholic faith is “countercultural,” he added. “We’re trying to resist greed and selfishness. We need to remember 9/11.”