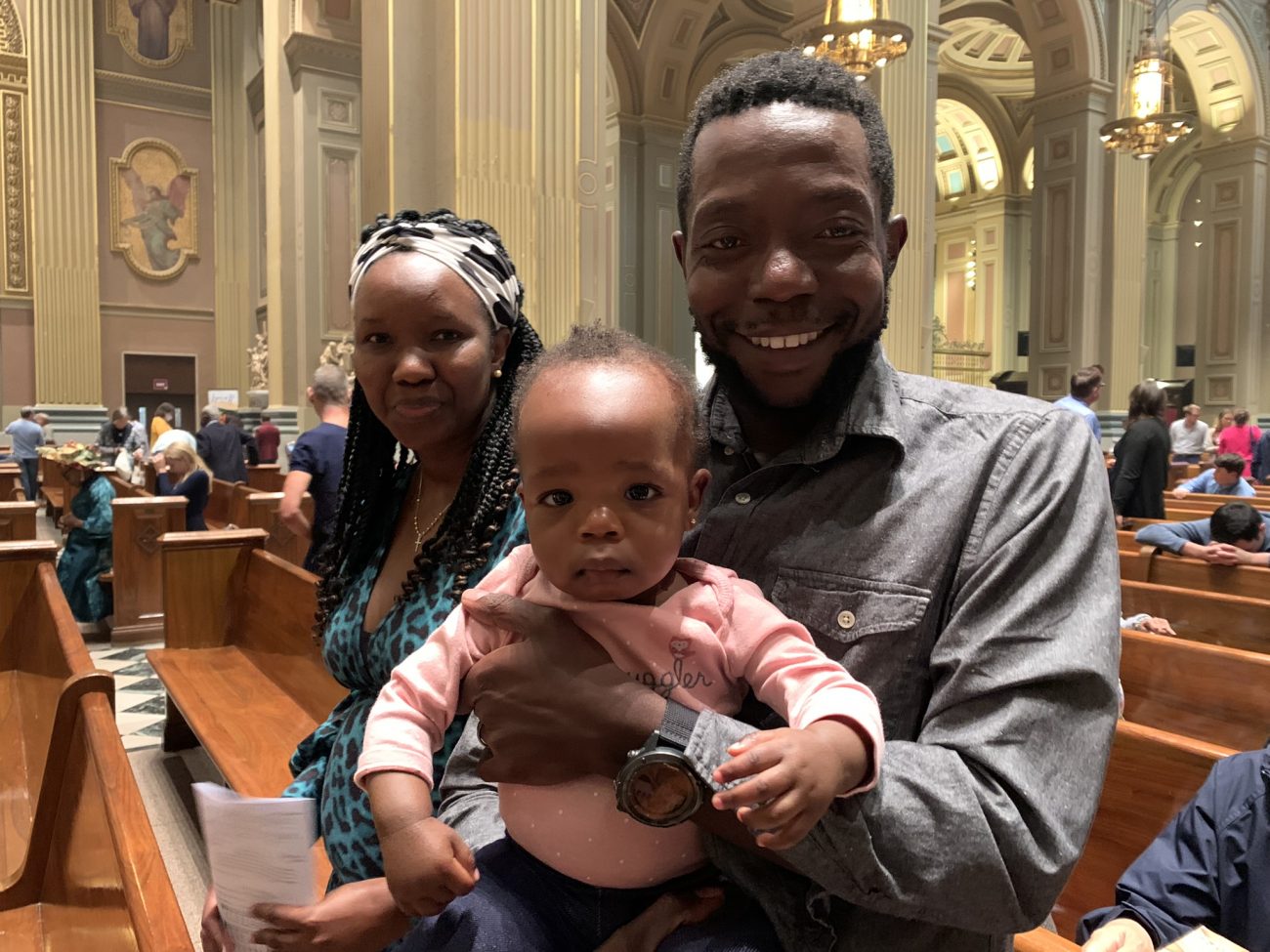 Laurette and Emmanuel Giraneza, along with their daughter Hosanna, were on hand at a Sept. 25 Mass celebrated by Auxiliary Bishop John McIntyre at the Cathedral Basilica of SS. Peter and Paul to open Respect Life Month. (Gina Christian)

As an annual pro-life observance kicks off, a Philadelphia bishop is urging faithful “not to grow complacent” in advocating for the defense of human life.

Following the June 24 Supreme Court decision that returned abortion regulation from federal to state levels, “we know … there is much work, a lot of effort, a lot of prayer and a lot of advocacy that now has to happen,” said Auxiliary Bishop John McIntyre.

The bishop shared his insights during a homily at an opening Mass for Respect Life Month, observed by the U.S. bishops each October to focus on spiritual, educational, pastoral and legislative approaches to upholding human life and dignity. 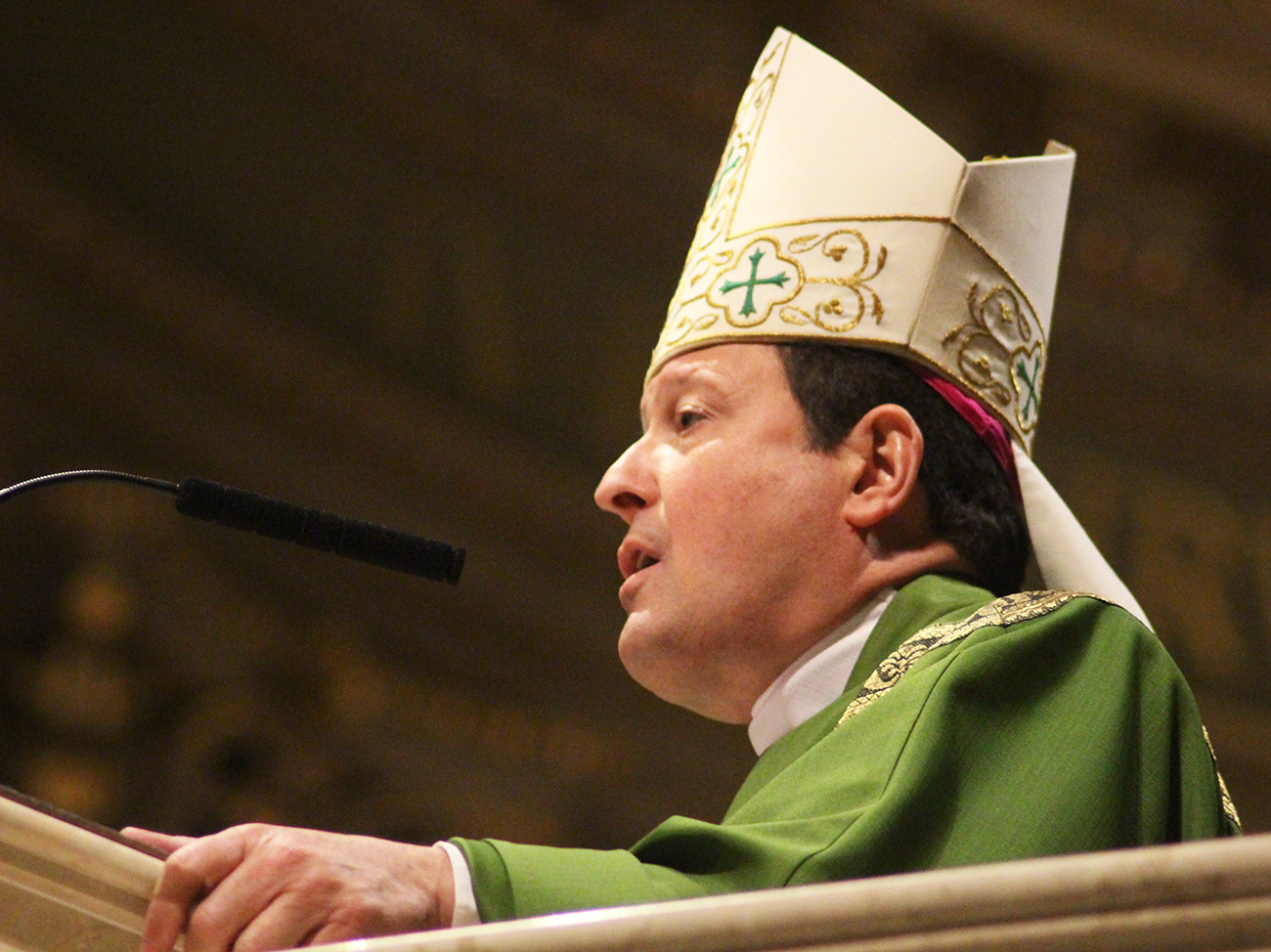 At a Sept. 25 Mass to open Respect Life Month, Philadelphia Auxiliary Bishop John McIntyre urged faithful “not to grow complacent” in advocating for the defense of human life. (Gina Christian)

Sponsored by the archdiocesan Office for Life and Family (OLF), the Sept. 25 liturgy at which Bishop McIntyre presided drew some 250 participants to the Cathedral Basilica of SS. Peter and Paul.

Also on hand were representatives from the Bucks County-based Legacy of Life Foundation, which provides crisis pregnancy services, outreach, post-pregnancy support and advocacy through its area Women’s Centers.

The “myriad” of resources provided by that organization, OLF and archdiocesan Catholic Social Services (which Bishop McIntyre directly oversees) counters the “tired, old and false narrative that the church is simply interested in convincing women not to have an abortion, (and that) once that task is accomplished, we walk off,” said Bishop McIntyre.

Instead, “nothing could be further from the truth,” he said, since “day in and day out, men and women who are both members and non-members of the church strive … (to help) women who are in crisis pregnancies and are there for them after they give birth.” 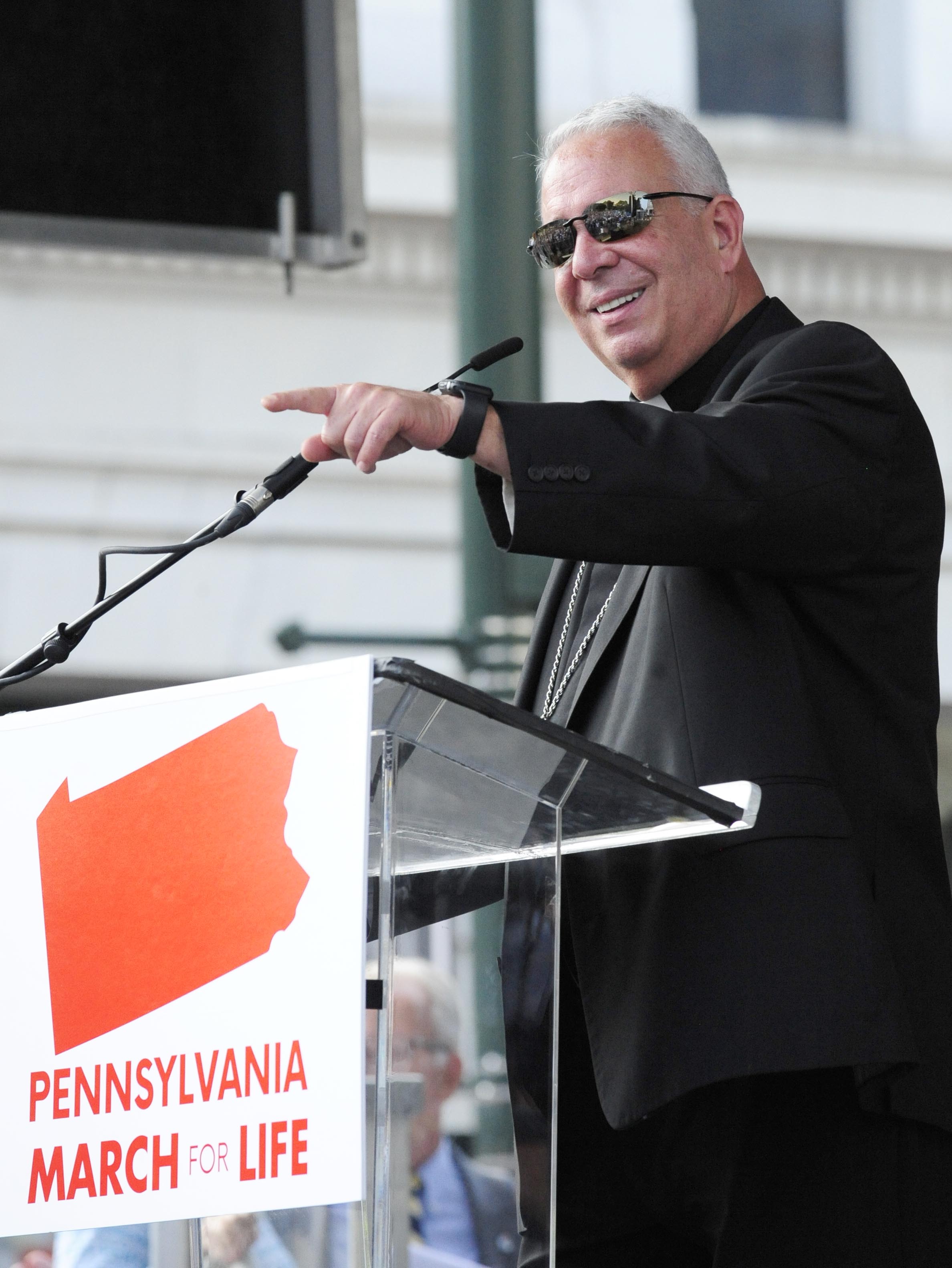 Speaking at the Sept. 19 Pennsylvania March for Human Life in Harrisburg, Archbishop Nelson Pérez said pro-life advocates must “remember that the job isn’t done yet” following the reversal of Roe v. Wade. (Rachel Bryson/Diocese of Harrisburg)

Many locations – such as Catholic Social Services’ family service centers and Cenacle – offer aid in both English and Spanish.

At the same time, such efforts must be expanded, said OLF director Steven Bozza.

While the reversal of Roe v. Wade was “a testament and proclamation” that “when we place things in God’s hands … he acts,” pro-life advocates must “remember that the job isn’t done yet,” said the archbishop.

He called for continued prayer to “protect the unborn … and the dignity of life from conception to natural death.”

Bishop McIntyre agreed, saying “we must recommit ourselves again and again” to the pro-life movement.

He noted that “many of those who do support abortion in our nation … were caught off guard” by the Supreme Court’s recent decision “after 50 years of Roe v. Wade as the law of the land.”

That “shock and dismay” has led “some, (just) some” to turn to acts of violence and vandalism against pro-life centers, against church and other entities,” said the bishop.

Yet “as always Christ calls us to respond in charity, to respond in truth and to (affirm) the reality of the child in the womb … in a way that seeks the good of those who do not agree with us, and who at times oppose us vociferously,” Bishop McIntyre said. “It is charity that ultimately converts souls, (and) Christ … in giving himself to us on the cross performed the greatest act of charity history has ever known.”

Jen Reed of The Catholic Witness, the newspaper of the Diocese of Harrisburg, contributed to this report.

“Peace Be With You: Pregnancy Care-Related Resources” is available at no charge from the Archdiocese of Philadelphia’s Office for Life and Family, and may be freely reproduced and shared widely.

To order a free printed copy of the guide, click here.

NEXT: Papal Foundation awards more than $800K in scholarships