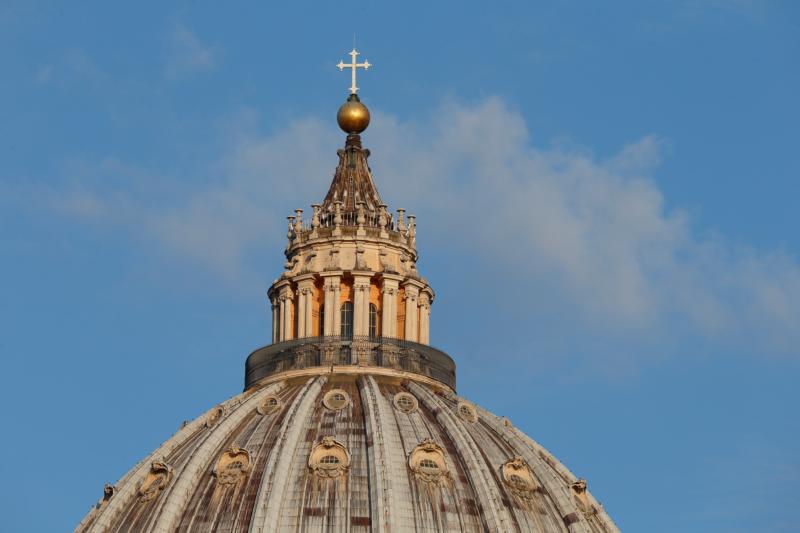 The dome of St. Peter's Basilica is pictured at the Vatican July 12, 2019. (CNS photo/Paul Haring)

The Papal Foundation announced Sept. 22 it has awarded $802,180 in scholarships to 112 priests, brothers, sisters and lay faithful from five continents. Beginning Oct. 3, the scholarship recipients will study at 13 different universities in Rome as part of the St. John Paul II Scholarship Program.

Established in 1988, the Chester-based foundation is the only one in the U.S. exclusively dedicated to fulfilling the requests of the Holy Father for the needs of the Church.

Since 2000, the foundation’s St. John Paul II Scholarship Program has provided nearly 13 million dollars to more than 1600 Saeman Scholars who, after furthering their educations, return home to teach and serve in leadership positions in their dioceses.

“St. John Paul II will always be remembered for his commitment to serving the next generation of the church, which is why we at The Papal Foundation are honored to carry forward his vision of training scholars to effectively lead in their communities,” said David Savage, the foundation’s executive director. “To play a role in the formation of leaders in the Catholic Church throughout the world is a true blessing.”

In 1998, Pope John Paul II envisioned a scholarship program that would cover tuition, room and board for priests, brothers, sisters, and laity from developing nations, allowing scholarship recipients to study in Rome and then return home to teach in a way that is faithful to the Magisterium.

The program was realized two years later when Stewards of St. Peter John and Carol Saeman of Denver generously donated $5 million, which was matched by The Papal Foundation, to launch the program.

“St. John Paul II knew how important it was to prepare future leaders in the Church,” said Eustace Mita, president of the foundation’s board of trustees. “I am reminded of his quote, ‘The future is in your hearts and in your hands. God is entrusting to you the task, at once difficult and uplifting, of working with him in the building of civilization and love,’ which so embodies The Papal Foundation’s mission and that of this scholarship program.”

Sister Mwila Mwelwa, a Franciscan Missionary Sister of Service from Zambia and first-year scholar studying at the Claretian Institute of the Theology of the Consecrated Life, is working toward her doctorate in the theology of consecrated life. After earning her degree, she will lead formation, initial and ongoing, in her congregation.

“I would like to express my sincere gratitude for awarding me the scholarship,” she said. “I thank God for your kind generosity. May God reward all of your efforts in offering scholarships. I really say thank you and I promise to use the opportunity well and for the greater glory of God.”

Sister Akon Dominic Dut Achor from South Sudan added, “Thanks once again, and please bring my gratitude to those who have sponsored my studies. I concluded the third year bachelor’s degree with success and satisfaction. May the Lord reward them and grant me the strength and grace to continue the same for the remaining years.”

With more than $200 million in grants awarded to date, The Papal Foundation focuses on serving the poor in developing nations by building churches, schools and hospitals; countering hunger, abuse and trafficking; and offering the hope of the Gospel message.

The foundation later announced the approval of $14 million in grants, scholarships and humanitarian aid for international distribution, including more than $9 million in grants requested by the Vatican for 123 projects in 64 countries.

For more information about The Papal Foundation visit thepapalfoundation.org.