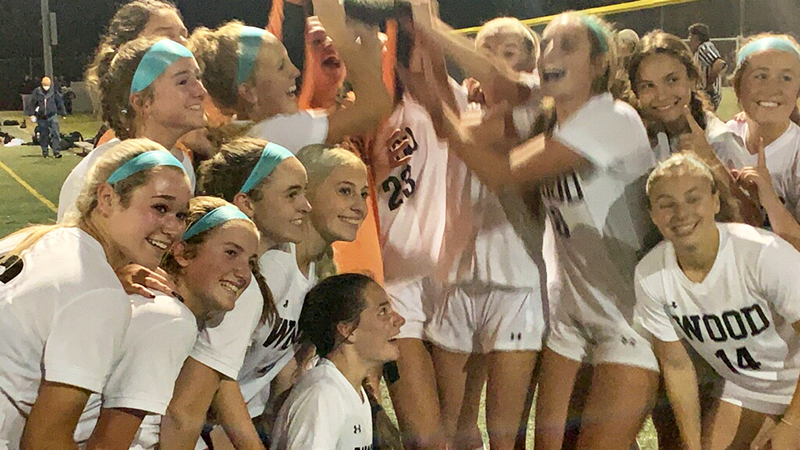 Archbishop Wood celebrates their PCL girls' soccer championship win a 3-1 victory over Archbishop Ryan Oct. 30, 2021. AS a new season begins, archdiocesan area teams say they're ready to give every game their all. (Photo by John Knebels)

Coaches talk about their importance. The top programs try to schedule the most difficult competition possible as a way to better prepare their players for the arduous challenges that lie directly ahead in the Philadelphia Catholic League.

“I feel like every game is a big game,” said Archbishop Ryan football coach Bill Murphy. “But when you get into league games, they have a different feel for sure.”

“Our non-league schedule is critically important in preparing our team for league play,” said Detweiler, whose three non-league opponents compiled a collective 8-1 record. “We feel battle tested and ready for what’s coming next.

“I will say, though, that there’s definitely a different energy when league play starts and you certainly feel it when you are grinding through the league schedule week in and week out.”

Attendance also increases when PCL squads meet. Because the league has broken into two divisions in most sports, more rivalries have developed in addition to the already-established neighborhood bragger’s rights.

The five-team PCL Red Division begins on the weekend of September 30.

“Since the Catholic League season officially starts up this week, the team is real focused and locked in as usual,” said Bonner-Prendergast junior Austin Cannon. “We are a real good team and have each other’s backs. I know each player on the team is getting more excited and hyped up.”

One of the great things about mid-September is that every team shares the same objective; namely, win a title.

“We are gonna have to be ready one game at a time and stay mentally ready throughout the rest of the season,” said Cannon. “We have three goals this year and it is to be PCL champs, then city league champs, and win a state championship.”

“I was definitely hoping for the upset win to start off the season,” said Conwell-Egan senior Dillon Farrell. “It was a hard fought 100 minutes of soccer.”

In girls’ soccer, defending champion Archbishop Wood is off to a 2-0 start. The Vikings will host Archbishop Ryan on September 22 in a rematch of last year’s final, won by Wood, 3-1.

NEXT: A fast-moving season for Catholic League sports