Boot Up Philly a ‘beautiful exchange’ of blessings 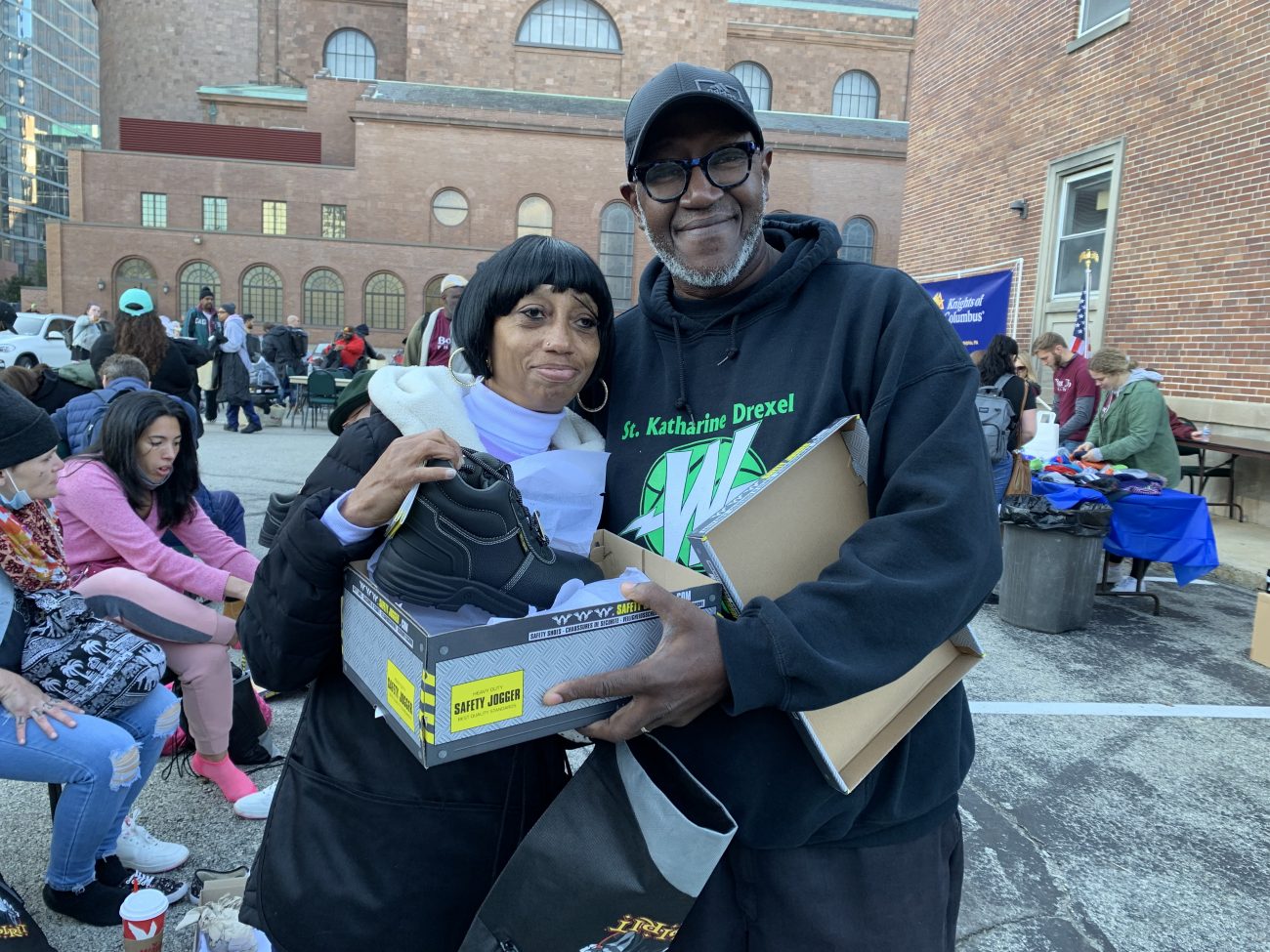 Permanent Deacon Anthony Willoughby of St. John's Hospice showed off a pair of boots to volunteers at the Oct. 22 Boot Up Philly giveaway, which blended practical aid with food, fun and fellowship. (Gina Christian)

Hundreds gathered last weekend for a clothing and footwear giveaway that doubled as a community barbecue, with blessings on the menu.

More than 500 were on hand for the second annual “Boot Up Philly” drive, which took place Oct. 22 in the parking lot of the Archdiocese of Philadelphia Pastoral Center, adjacent to the Cathedral Basilica of SS. Peter and Paul.

The initiative was spearheaded by St. John’s Hospice, a Philadelphia-based outreach that since 1963 has offered crucial immediate and longer-term supports to men experiencing homelessness in the city’s downtown area. Hundreds of residential and day guests receive meals, case management, on-site nursing, daily showers and access to a mail room.

A beneficiary of the Catholic Charities Appeal, the facility also annually houses some 250 men transitioning from homelessness to independent living.

Teaming up with SJH for the giveaway were staff from archdiocesan Nutritional Development Services (NDS), which counters food insecurity through a network of community food pantries and federally funded school meals programs; CSS’s housing and homelessness services division, which includes SJH and several other sites; Martha’s Choice Marketplace, a CSS choice food pantry in Montgomery County; the archdiocesan Office for Ministry with Young Adults; and members of the Knights of Columbus Council 1191, who distributed winter coats for children.

Rounding out the tables of boots and outerwear were freshly grilled hot dogs, healthy snack bags and live music that had more than one attendee dancing.

The fun helped expand the “tunnel vision” that often prevents those in homelessness from being seen as persons, said a client named Scott.

⁦⁦@ArchPhilly⁩, ⁦@CSSPhiladelphia⁩, & ⁦@NDSCFP⁩ staff plus ⁦@KofC⁩ members gave away hundreds of boots & coats yesterday at ⁦@CathedralPhila⁩ during the barbecue “Boot Up Philly” bash by St. John’s Hospice. Footwear, fun & fellowship all in one. pic.twitter.com/djcvMMO1kY

“It’s somebody who’s in pain and in need, and they’re surrounded by people who are able to help or can help in some aspect,” he said.

A former restaurant manager, the North Carolina native – who has lived throughout the country – “lost everything” during COVID-related lockdowns that prevented indoor dining. With his unemployment benefits were exhausted, Scott said he “got stuck” without a residence or resources, and found himself homeless.

Now in Philadelphia, Scott estimates he walks between 10 to 20 miles per day, staying in shelters at night.

As a result, his feet are “getting some conditions like blisters,” he said. “They crack, and these boots are going to help a lot, especially when it’s raining outside.”

Such hardship would have touched St. John Neumann, the beloved Philadelphia saint after whom the Boot Up Philly drive was modeled (SJH itself is actually named for St. John the Evangelist).

Known for his extreme self-sacrifice and generosity to the poor, the fourth bishop of Philadelphia once joked the only way he could change his shoes was by putting the right one on the left foot, since he had just a single pair – a set that logged hundreds of miles over difficult terrain as the saint labored tirelessly to evangelize others.

The Gospel message to which St. John Neumann dedicated his life also drew participants to Boot Up Philly.

“A need brings me here, and it’s also a need to socialize,” said Carl Fletcher of Philadelphia. “You can get boots, a coat – and you might even meet a friend, because that’s what you need: a friend like we have in Jesus. I suffer from depression, but not today, because these (events) are the type of things that make you feel good, and give you hope and understanding that we can do all things in Jesus Christ.”

Along with individual clients in homelessness, the giveaway attracted a number of impoverished families, many of whom were refugees, said Amy Stoner, director of CSS’s community-based and homelessness services divisions.

NDS executive director Lizanne Hagedorn said she and her team “hoped to see what more (they) could do” to support young children at next year’s event.

Her colleague David Stier, who heads up NDS’s community relations, said the giveaway helped show “a church that reached out” so that others “felt God’s love.”

At the same time, those who staffed the event were also blessed, said SJH program director Barry Martin.

“These are precious moments,” he said. “They’re an expression of what we are always trying to do – to bring Christ to everyone that we can, and as we touch their lives, they touch ours. It’s a beautiful exchange.”

NEXT: All Saints, All Souls point to ‘glory of heaven,’ says priest