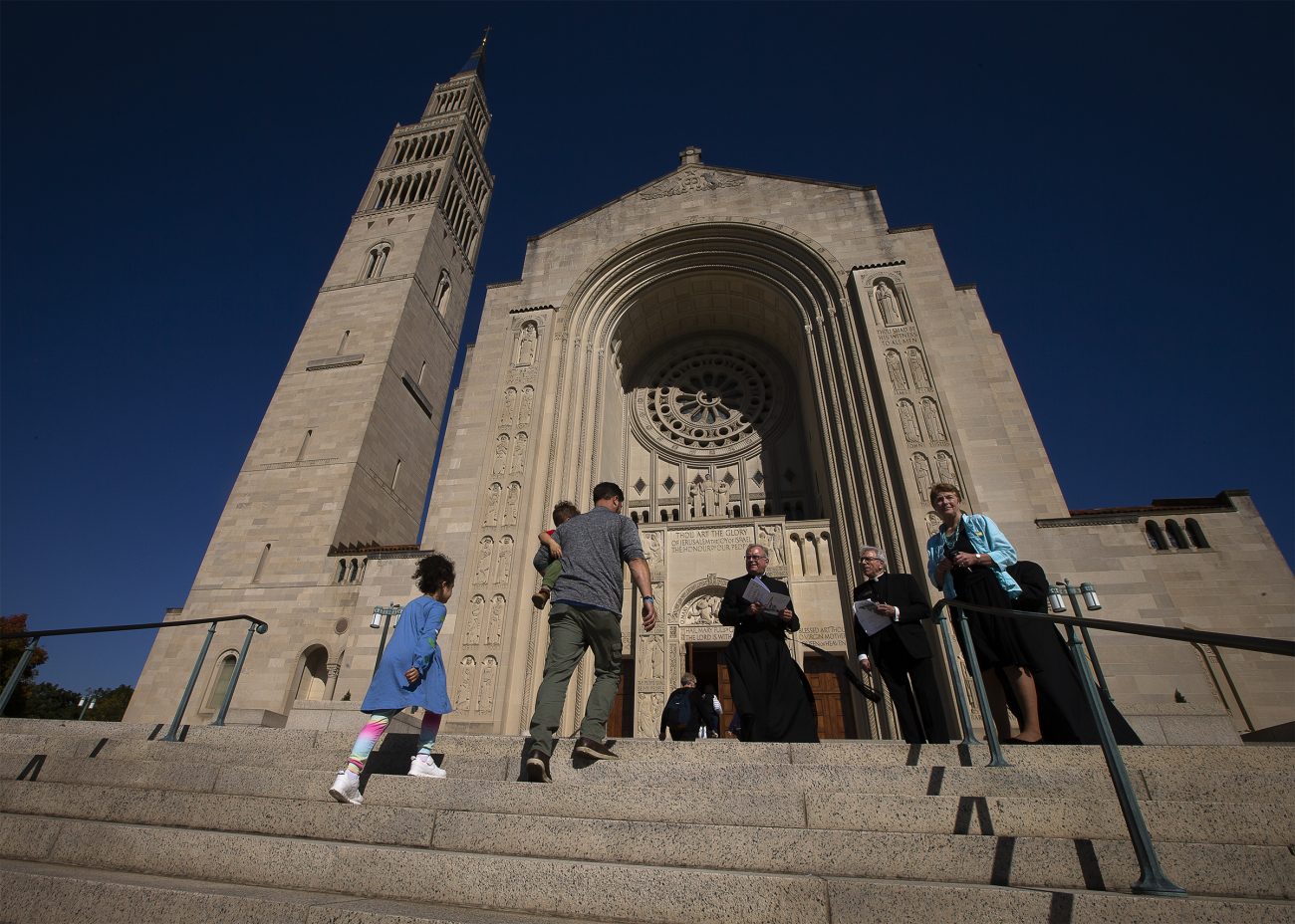 Parishioners from the Archdiocese of Philadelphia visit the Basilica of the National Shrine of the Immaculate Conception in Washington Oct. 15, 2022. The pilgrimage was in honor of Our Lady of the Most Blessed Sacrament. (Tyler Orsburn for CatholicPhilly.com)

More than 1,000 area faithful joined Archbishop Nelson Pérez in the nation’s capital to “carry their hearts to Mary’s house.”

Pilgrims from a number of parishes traveled to the Basilica of the National Shrine of the Immaculate Conception in Washington, D.C. for a day-long Oct. 15 gathering sponsored by the  archdiocesan Office for Divine Worship (ODW) and the Cathedral Basilica of SS. Peter and Paul.

(See a photo gallery from the Archdiocese of Philadelphia pilgrimage to the Basilica of the National Shrine of the Immaculate Conception.)

ODW director and cathedral rector Father Dennis Gill greeted participants as they arrived, noting in his opening remarks he hoped the experience would kindle “a new devotion to the Eucharist, a renewal of the local church and vocations to both religious and married life.”

Philadelphia Auxiliary Bishop Timothy Senior led pilgrims – among them, dozens of seminarians from St. Charles Borromeo Seminary in Wynnewood — in a recitation of the rosary, while fellow Auxiliary Bishop Michael Fitzgerald presided at a procession and crowning of a statue of Mary that had accompanied previous archdiocesan pilgrimages to the basilica.

“Mary always leads us to her Son in a very real way,” said Bishop Senior.

Archbishop Pérez echoed those words as principal celebrant and homilist at the pilgrimage’s concluding Mass, pointing to the “beautiful, intense and profound connection” between Mary and the Eucharist.

“The Blessed Mother gave (Jesus) his flesh,” said the archbishop. 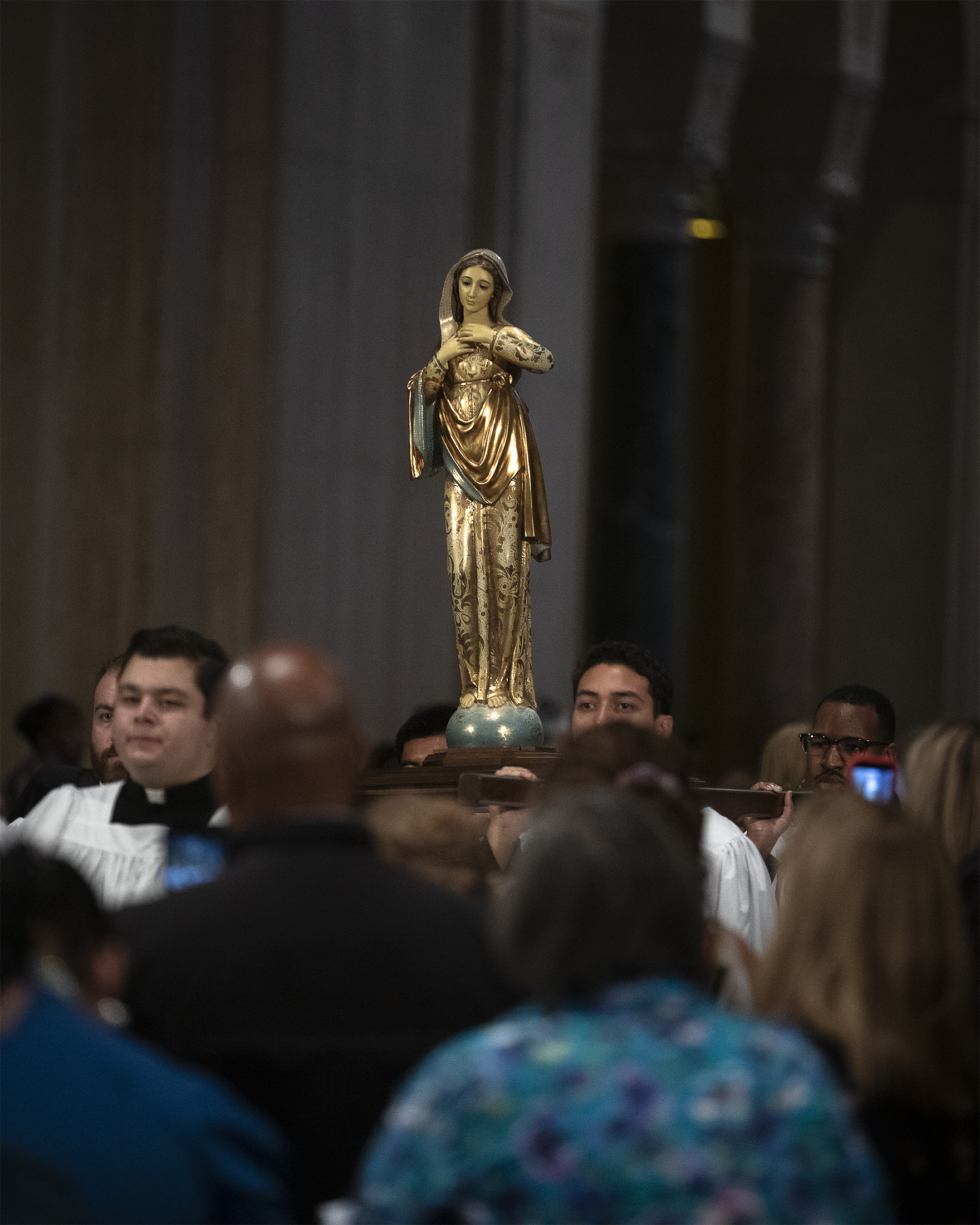 Seminarians from the Archdiocese of Philadelphia visit the Basilica of the National Shrine of the Immaculate Conception in Washington Oct. 15, 2022. The pilgrimage was in honor of Our Lady of the Most Blessed Sacrament. (Tyler Orsburn for CatholicPhilly.com)

Mary’s fiat (“let it be done”), through which she consented to bear Christ, is mirrored in the “amen which every believer says when receiving the body of the Lord…under the signs of bread and wine” (Ecclesia de Eucharistia, 55).

Just as “heaven and earth met in Mary’s womb … Christ (in the Eucharist) comes to our very soul,” said Archbishop Pérez.

At the same time, holy Communion is “not just about receiving our little (bit of) Jesus in our heart,” he cautioned.

Instead, “we also receive (the Eucharist) as a member of the church,” said the archbishop. “As Mary gave Christ to the world, you and I have a responsibility to give him to the world.”

He encouraged the pilgrims to “look for those moments” in “the little world that surrounds each of us” when they can witness to Christ’s love as missionary disciples.

The pilgrimage offered a chance to recalibrate the soul for that very task, said Portia Edmunds a member of and office manager for St. Ignatius of Loyola Parish in West Philadelphia.

“I don’t really get enough time to just sit and pray,” she admitted. “Everything is very condensed, with a busy work life, a busy home life, marriage, children. Sometimes you do have to sit back and reflect.”

Carla Caple-Petty, parish services director at St. Cyprian in West Philadelphia, said she hoped “to be more in tune” with God after the gathering.

“I want to see what I can do to know (the Lord) better,” said Caple-Petty, who had regularly participated in the archdiocesan pilgrimage as a child.

One particular goal was “implementing prayer throughout the day, not just waking up, saying prayers, and then saying prayers again before going to bed,” she said.

“This has been a wonderful spiritual journey,” said Edmunds. “I really, really needed this today.” 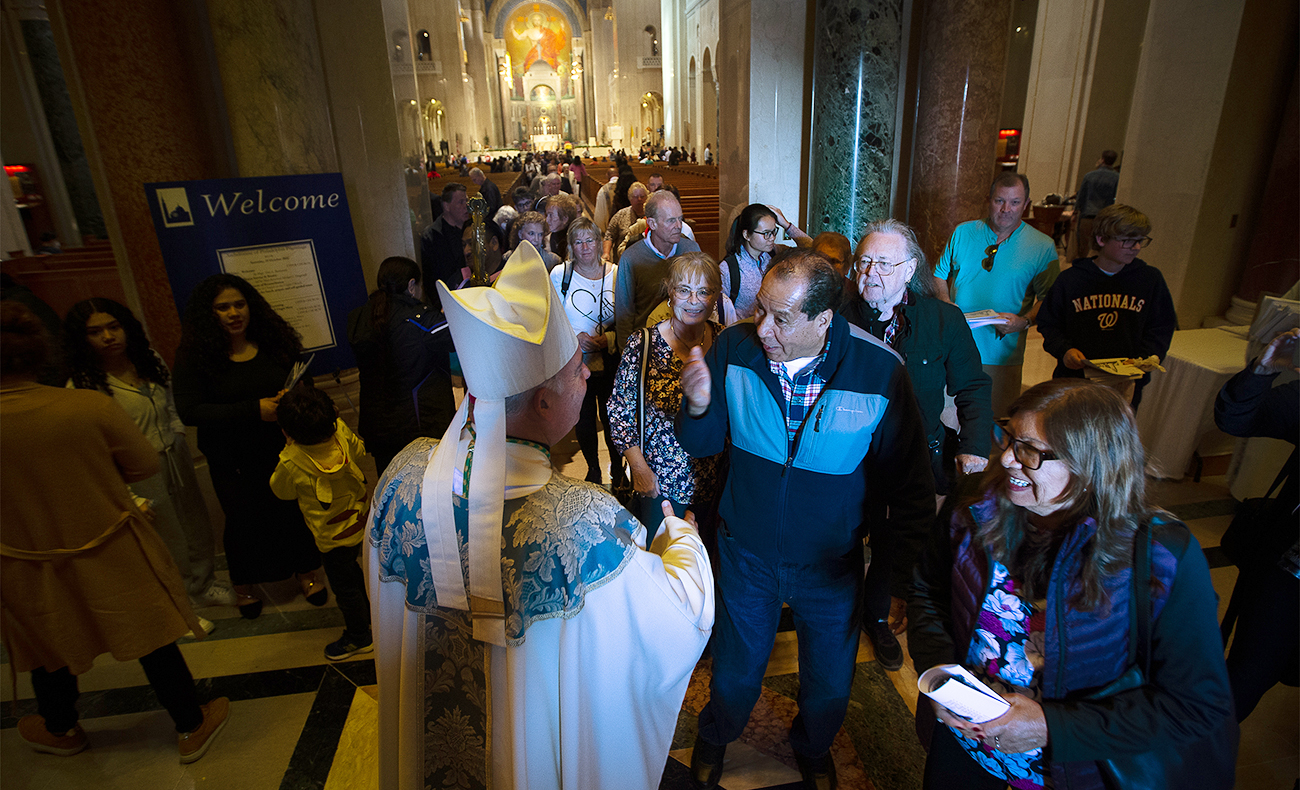 Philadelphia Archbishop Nelson J. Pérez greets pilgrims after Mass at the Basilica of the National Shrine of the Immaculate Conception in Washington Oct. 15, 2022. The trip was in honor of Our Lady of the Most Blessed Sacrament. (Tyler Orsburn for CatholicPhilly.com)

NEXT: Synod report reveals need for healing, signs of hope