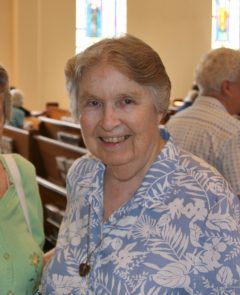 Sister Jeanne’s life in the Society of the Holy Child Jesus is legendary. She ministered worldwide as an educator, researcher, pastoral minister, and historian. Sister Jeanne had been briefly imprisoned during the Nigerian-Biafran Civil War and studied both Arabic and Creole to better serve the people of Israel, Palestine, and Haiti. Later in life, she was passionate about researching and documenting the Society’s history, including the Sisters’ histories.

Margaret Rogers, SHCJ, offered the following about her friend and fellow member of the “centennial set” the group of women who entered the Society in 1946, a century after the Society’s founding. “Jeanne was a brilliant woman with so many gifts and talents. She could read at lightning speed and retain all that she read. She was scholarly, practical, a good cook, and had a lovely singing voice. She was also a marvelous person to give a tour. Whenever our paths crossed, Jeanne would be the best guide – she knew the people, places, and culture. She had a natural ability to bring people together and keep them connected, particularly the Sisters who entered in 1946. Our ‘centennial set’ was known throughout the American Province for its special bond. That bond was all because of Jeanne. I will miss her dearly.”

As a child, Sister Jeanne’s family moved from Detroit, Mich., to Waukegan, Ill., where she attended Saint Anastasia School and Holy Child High School and was taught by the Sisters of the Pope Paul VI gives a medal to Jeanne Adams, SHCJ, for being in the “last group to leave Biafra” and “out of prison!” March 1970. From the SHCJ American Province Archives. Holy Child Jesus. She entered the Society of the Holy Child Jesus after high school and made her first and final vows in 1949 and 1954, respectively. She became known by her religious name Mother John Bosco.

After returning to the United States, Sister Jeanne taught at Rosemont College in Rosemont, Pa., while studying Arabic for her upcoming Middle East assignment. She ministered in Israel and Palestine as a teacher and pastoral care worker from 1980 to1984. She later served and taught in impoverished communities in Haiti and Jamaica from 1991-1994.

Beginning in the mid-1980s, Sister Jeanne became very interested in documenting and archiving content for the Society. She traveled to places that were significant in the Society’s history, including Natchez, Miss., where Venerable Cornelia Connelly lived as a newlywed, and Towanda, Pa., where the first Holy Child Sisters arrived from Europe to begin the Society’s American ministry. When Sister Jeanne moved to Holy Child Center in Rosemont, she worked in the American Province’s archives for several years, periodically giving presentations on the Society’s history.

Sister Jeanne received a Bachelor of Science in Education in 1956 from Villanova University in Villanova, Pa., and a Master of Arts in Religion/Anthropology in 1972 from Temple University in Philadelphia.

Sister Jeanne joins her parents, Lawrence and Hortense (Sieffert) Adams, brothers, Lawrence, John, and Timothy, and sister, Evelyn Dickelman, in their eternal life. She is survived by her sister, Kathy Reed, and many cousins, nieces, nephews, grandnieces, and grandnephews. In lieu of flowers, memorial donations may be sent to the Society of the Holy Child Jesus –American Province, 1341 Montgomery Avenue, Rosemont, PA 19010, or made online at www.shcj.org/american/donate.

NEXT: Sister Margaret Mullin dies at 89