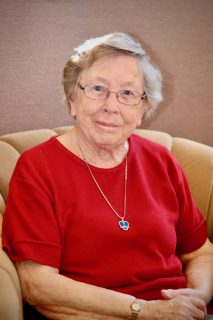 Anita Quigley, SHCJ, offered the following about her friend and fellow community member of more than twenty years, “Sister Margaret embodied a love full of action through simple, quiet, and humble ways. She deeply loved the Society, and her family and friends. We will miss her dearly.”

Born and raised in East Lansdowne, Pa., Sister Margaret met the Sisters of the Holy Child Jesus at West Catholic Girls High School. She was impressed by the Sisters’ kindness and caring for each student and entered the Society immediately after graduation in 1950. She made her first and final vows in 1953 and 1958, respectively. She became known by her religious name Mother Mary Evelyn.

In 1989, Sister Margaret received training at Abington Hospital in Abington, Pa., to become a home health aide in Cape May County, N.J., where she worked with the Holy Redeemer Sisters. She was one of the pioneering Holy Child Sisters to minister in Cape May. In 1996, Sister Margaret continued as a health aide at Holy Child Center in Rosemont, Pa., for three years, and then became a receptionist at the American Province offices, a ministry she happily fulfilled for 23 years. She officially retired in June 2022.

The American Province staff cherished Sister Margaret’s time and gentle spirit. One employee shared, “Sister Margaret was the matriarch of our office family. She kept the office humming and was our caretaker. She was also our SHCJ encyclopedia. She knew all the Sisters’ baptismal and religious names. While quiet, Sister Margaret had a wonderful sense of humor. Very little got by her, and she treated us with love and kindness.”

Sister Margaret joins her parents Joseph and Evalyn (Craft) and siblings Father Joseph Mullin, Philip and his wife Maryellen (Logue), Betty (Mullin) and her husband George McGuigan, John, Paul, and David in eternal rest. She is survived by her sister Mary (Mullin) Krawczuk and sisters-in-law, Anne (Rider) Canning, wife of Paul Mullin, Mary (Newell), wife of David Mullin, and Mary (King), wife of John Mullin and many nieces and nephews and their children, grandchildren, and great grandchildren.

In lieu of flowers, memorial donations may be sent to the Society of the Holy Child Jesus – American Province, 1341 Montgomery Avenue, Rosemont, PA 19010, or made online at www.shcj.org/american/donate.

NEXT: Sister Anita Cattafesta dies at 91