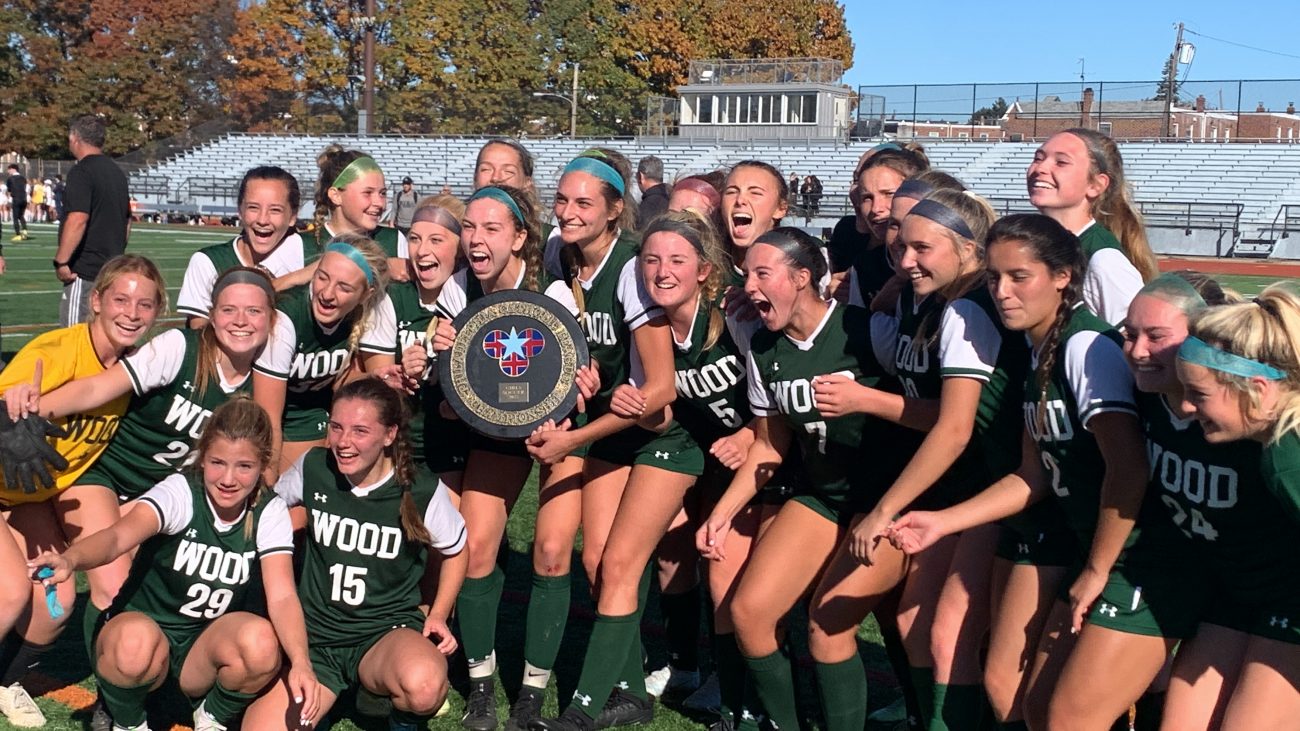 Against such fierce competition, it’s extremely difficult to win a Philadelphia Catholic League championship. Near impossible to win two in a row. Throw in the lofty goal of winning a state crown . . .

So, although they were unable to finish the year on a winning note, Archbishop Wood girls’ soccer teams won’t let avarice ruin what most players described as a “great” season.

In a thrilling PCL championship on October 29 at Northeast High School, Wood snared its second straight title and 16th all-time by outlasting stubborn Lansdale Catholic, 2-1, in overtime. After an 8-0 victory in their District 12 final, the Vikings upended Bishop Shanahan, 2-1, in the first round of the PIAA Class 3A state tournament.

A quarterfinal bout on November 12, however, resulted in a 1-0 loss to Greencastle-Antrim.

“Winning was absolutely a thrill,” said Wood junior Grace Hoeger, a product of Horsham’s St. Catherine Of Siena and a graduate of Ambler’s Our Lady of Mercy Regional Catholic School. “After losing a lot of seniors last year, as the season progressed we really bonded as the season went on and really had a good run in the PCL and states. As a team, we learned that it is all about putting the ball down and playing good soccer, especially in these high-pressure games. A lot of touches on the ball and high intensity practice prepared us for these big games.”

Wood’s win over Lansdale Catholic elevated Paige Eckert to heroine status. After scoring the game-tying goal with 5:13 left in regulation, Eckert slammed home a shot from 13 yards away in sudden-death overtime for the dramatic clincher.

As she stood holding the championship plaque, Eckert described the championship winner. The graduate of Warminster’s Nativity of Our Lord School emulated the cool countenance of an upperclassman.

“All I remember is, Ava (PCL Most Valuable Player junior Ava DeGeorge) gave me that ball and I just looked up and saw an opening and just hit it as hard as I could and it went in,” said Eckert, a second-team All-Catholic who scored 14 goals, including a three-goal hat trick in the district final, and assisted DeGeorge for the game winner against Shanahan. “It’s so special for me and I’m just glad I could win it for them. It’s their senior year, their last PCL game ever.”

The Vikings, who finished undefeated in the PCL, were unable to advance to the state semifinals.

“After all the excitement of winning the PCL, we had to focus on the state run, which is always a different environment,” said Hoeger, who assisted Eckert’s first goal in the PCL championship. “I think as a team we did very well, even though we did not get the outcome we wanted, and we hope to be back next year even stronger.
“While winning the PCL was definitely a great accomplishment, winning states was a totally separate goal for us. After the PCL, we really focused on these state games studying film and training because the environment in states is definitely elevated. So yes, the win of the PCL was a great accomplishment this year but our loss in states was definitely still upsetting.”

Hoeger said it “definitely does help” being a junior.

“Every time I look back on the season I see a chance to improve,” said Hoeger. “It is great to get the opportunity to play again next year.”