Archbishop Pérez: Join in prayer for the intention of Pope Emeritus Benedict’s health

Pope Emeritus Benedict’s life ‘was a gift to the world,’ says archbishop 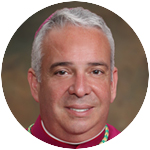 The archbishop will offer Mass for the happy repose of the soul of the Pope Emeritus at the Cathedral Basilica of Saints Peter and Paul and the Shrine of Saint Katherine Drexel tomorrow, Jan. 1, 2023 at 11:00 a.m. All are invited to join in prayerful solidarity. For additional information, please visit here.

Along with the people of the Church of Philadelphia and the entire Universal Church, I was deeply saddened to learn of the death Pope Emeritus Benedict XVI this morning.

In the midst of great sorrow, we also reflect of the life and ministry of the Pope Emeritus with infinite gratitude. He tirelessly served the Church for over 70 years as a parish priest, professor of Theology, Archbishop of Munich and Friesing, Dean of the College of Cardinals, Prefect of the Congregation for the Doctrine of the Faith, and Supreme Pontiff.

Recognized as a man of deep faith and keen intellect, he was a key advisor at the Second Vatican Council and for many years worked closely with Saint John Paul II during his papacy. Throughout his long life, Pope Benedict XVI was a brilliant teacher of the faith. His every action was full of courage, humility, and love for those entrusted to his pastoral care. His legacy is a profound one that leaves an indelible mark on the life of the Church around the world.

Pope Benedict XVI also directly impacted our local Church in tremendously positive ways. Saint Charles Borromeo Seminary was honored to host him in 1990 when then-Cardinal Ratzinger delivered a keynote address to the seminarians of the United States regarding the importance of priestly formation. In 2012 while serving as Pope, he selected Philadelphia to host the World Meeting of Families. That precious gift will always be remembered as a joyous occasion that brought the world to our region in an effort to strengthen the ties of family life that form the bedrock of society.

His retirement in 2013 was an unparalleled act of selflessness and a lesson in humility from which we can all benefit. Quietly and prayerfully he still continued to serve the Church until the end of his life. Pope Emeritus Benedict XVI has now been called home by God. His life was a gift to the world. May his example inspire all of us to serve Christ’s Church on earth with joy and zeal as Missionary Disciples.

I ask the people of the Archdiocese of Philadelphia to join me in offering prayers for the happy repose of Pope Emeritus Benedict XVI’s soul. May God grant him the gift of eternal life and bring comfort to a Church in mourning.