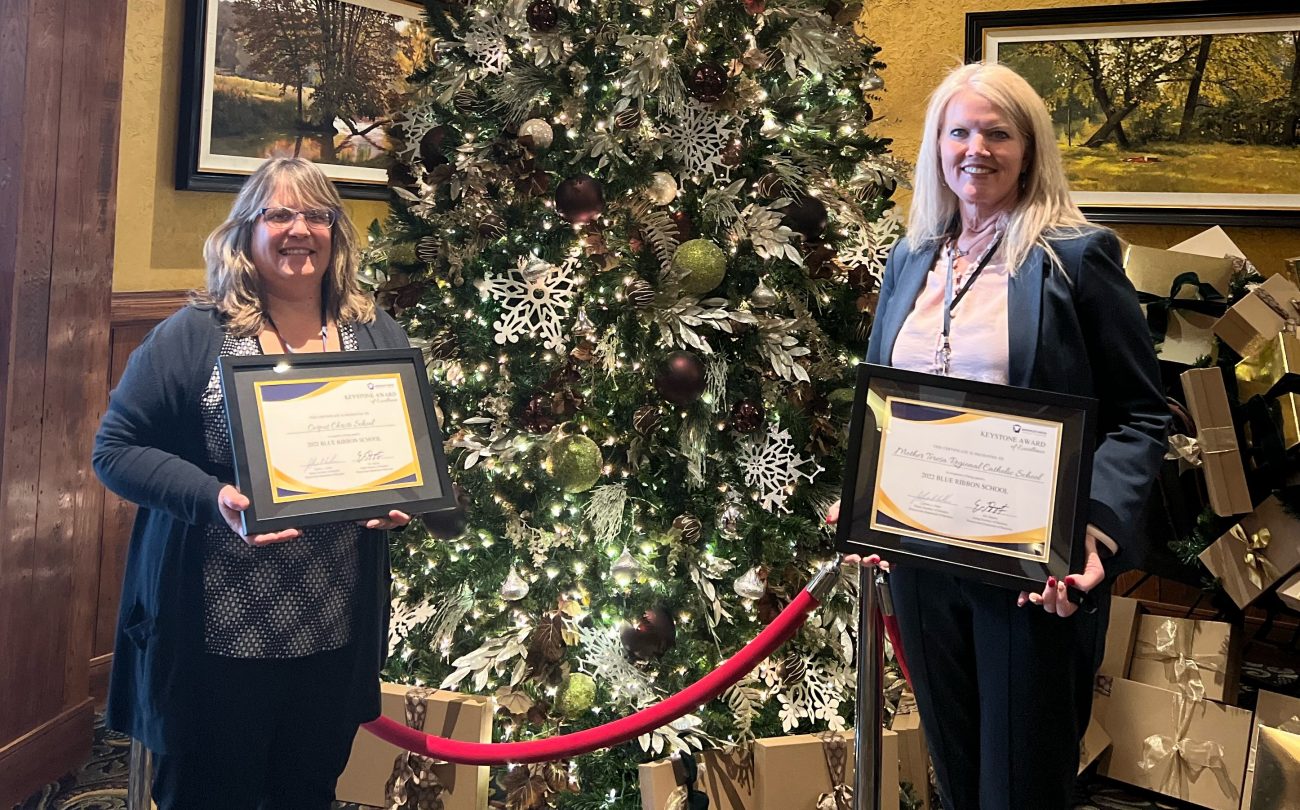 Mrs. Maria Greenberg, Principal of Corpus Christi Catholic School (left) and Ms. Christine Pagan, Principal of Mother Teresa Regional Catholic School pose with their awards during a Dec. 5 luncheon. Both schools were honored with the Pennsylvania Keystone Award of Excellence in recognition for being named a 2022 National Blue Ribbon School.

Two archdiocesan elementary schools in Montgomery county were recently honored with the Pennsylvania Keystone Award of Excellence in recognition for being named a 2022 National Blue Ribbon School.

On Dec. 5 representatives from Corpus Christi Catholic School in Lansdale and Mother Teresa Regional Catholic School in King of Prussia received the distinction during a State luncheon from the Pennsylvania Department of Education.

They were joined by Andrew McLaughlin, Ed.D., Secretary for Elementary Education in the Archdiocese of Philadelphia.

Both schools were selected as part of the 2022 cohort of National Blue Ribbon Schools in an announcement made by Miguel Cardona, Secretary of the United States Department of Education, on Sept. 16, 2022.

They were chosen for this honor based on exemplary high performance.

Corpus Christi and Mother Teresa Regional are two of only 297 total schools and among only 24 private or religious schools in the country to receive this honor this year.

In Sept. Archbishop Nelson J. Pérez said, “On behalf of all of us in the Archdiocese of Philadelphia, I extend prayerful congratulations to our Catholic elementary schools named National Blue Ribbon Schools of Excellence by the United States Department of Education this year!”

He continued, “It’s an incredible honor and one shared by all members of your school and parish community! I am proud of you for being a shining examples of the very best that Catholic education has to offer.”

With the addition of the 2022 cohort, Blue Ribbon status has been awarded 48 times to parish and regional elementary schools in the five-county archdiocese since the program’s inception in 1982.

PREVIOUS: Our Lady of Guadalupe celebrations scheduled throughout the archdiocese, Cathedral Basilica