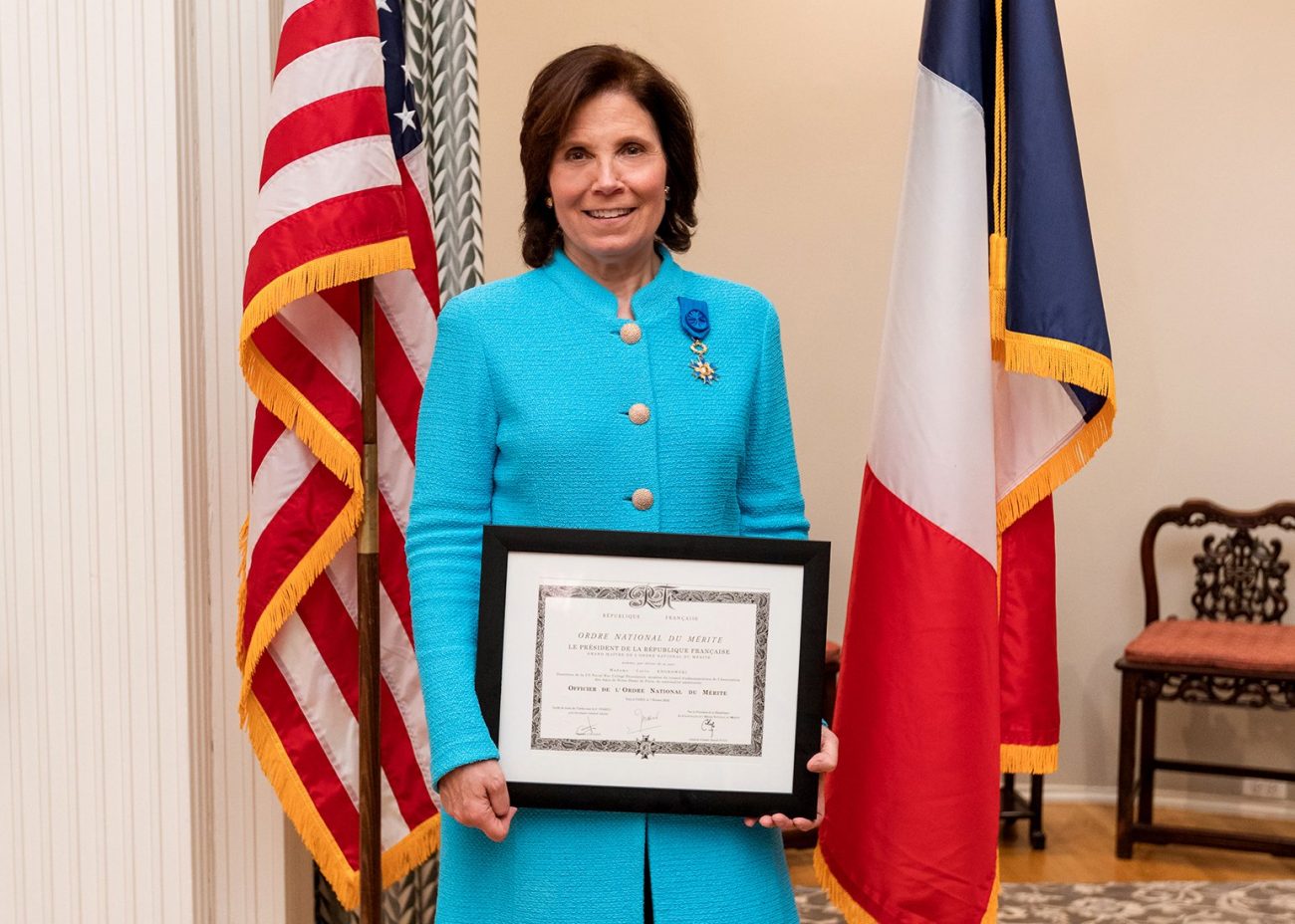 Carla Knorowski, center, is awarded the rank of officer in France's National Order of Merit for her efforts to raise funds to restore Notre-Dame Cathedral in Paris during a ceremony in Chicago Oct. 8, 2022. She joined the board of directors of the Friends of Notre-Dame de Paris in 2019. (CNS photo/courtesy ANB Communications)

Carla Knorowski, a lifelong resident of Chicago, is a fundraiser by profession who believes stray coincidences sometimes foretell a life’s path.

Her childhood parish was Ss. Genevieve Stanislaus Bishop and Martyr, usually just known as St. Genevieve’s. Genevieve is the patroness saint of Paris.

Her experience with fundraising — she’s the current president and chief development officer of the Naval War College Foundation, and before that she was the CEO of the Abraham Lincoln Presidential Library Foundation — led her to join the board of directors of the Friends of Notre-Dame de Paris in 2019.

That organization is raising money for the restoration of the iconic Notre-Dame Cathedral, heavily damaged by fire on April 15 that year.

For that effort, the Republic of France has given her the rank of officer in the National Order of Merit. The award was presented in October.

Knorowski, with a doctorate in public policy and political science from the University of Illinois in Chicago, and whose home parish is now St. Alphonse, also has been a managing director of the Chicago Humanities Festival.

The National Order of Merit was established by French President Charles de Gaulle in 1963.

“I was not expecting it,” Knorowski told Catholic News Service in a Dec. 19 phone interview. “It was just really a surprise.”

The Friends of Notre-Dame group on whose board Knorowski serves is one of four organizations raising $885 million for the cathedral’s restoration. There are currently 340,000 individual donors spanning 150 countries, and, Knorowski added, “$63 million came from individuals outside of France, and about half of that came from the United States.”

The goal is to get the cathedral reopened by 2024, although restoration work will continue until at least 2030.

“It’s a labor of love, you know,” Knorowski said of the fundraising.

The damage most people know about includes the lead roof melting, the damage to the organ and the wooden spire destroyed by the flames.

Knorowski said the restoration effort includes obtaining specific trees from which to build a new spire. There was never any discussion of having the spire built from anything other than the original material.

The Lincoln Library post allowed her to indulge in her love of American history. Any facts about the 16th president that surprised her?

“Oh! Yes! At Lincoln’s funeral, his horse, Old Bob, was there. He had that name because Young Bob was Lincoln’s son, Robert.”

“Yes! When he lived in Springfield, Illinois, he once rescued a dog he saw being teased by two boys. And he once jumped out of a window at the state Capitol to duck a vote.”

But Lincoln, to her, is far more than a collection of fun facts. “It’s the whole notion that he failed so many times in his life, and kept trying — kept persevering — and became president of the United States,” she said.

It’s the same example Knorowski wants to set for the restoration of Notre-Dame Cathedral.

Knorowski also has worked with the Paris-Chicago Sister Cities Committee to raise funds to cast and erect a statue of Lincoln in Paris.

NEXT: USCCB: Reflection of USCCB President on Death of Pope Benedict XVI