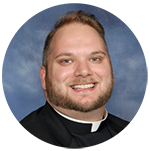 Have you ever looked back on old family photos or skimmed through your phone’s pictures and found a picture of yourself without recognizing right away that it was you? It sounds silly. But we change a lot over the years and we can forget what our own faces looked like when we were younger, skinnier, healthier, or having a bad hair day!

I came across a photo of me at my mother’s house from Halloween some time during my high school years. I had to ask my mom who it was. Between the ridiculous costume and the lanky arms I didn’t recognize myself!

Sometimes we also have an image of someone in our mind based on a picture or a memory from the last time we saw them. Years can go by before we see them again and it can be shocking to see how much they’ve changed. Have you ever been to a high school reunion? We all look very different at those!

When Jesus approached John the Baptist at the river John didn’t immediately recognize him. But they’re cousins — family! However the reality of travelling in ancient world and John’s hermitage in the desert meant that they probably hadn’t seen each other since they were children. But when John poured the water of baptism over his head, the heavens opened up, and Spirit descended upon him like a dove.

John had been told by God to look for this sign in order to recognize the Messiah. There he was: his cousin, his family, his Lord, anointed by the Holy Spirit.

Even though John didn’t recognize Jesus at first, Jesus knew exactly who John was when he arrived at the river. Jesus knew him by his words, his actions, his devotion to the message of repentance. Jesus saw a reflection of himself in his cousin John.

Each of us have been baptized into the death and Resurrection of Christ. That grace makes us living images of Jesus in this world. Unfortunately, as beautiful as that truth is, we often muddy it by sin. We may not even recognize ourselves sometimes, not because our body has changed but because our heart has. Anger, envy, pride, lust, greed, desire for revenge these all darken the light of the Risen Jesus reflected in each of us.

We need to be honest with ourselves and ask hard questions: Would Jesus recognize us? Would he see himself in us?

The truth is His grace is enough for us to be the people He has made us to be! We don’t need to recapture our youth, try to fit into those jeans we wore in high school, change our hairstyle, or buy new clothes to be ourselves.

The heart of every Christian is united to the same identity, the same grace: we are the image of Christ living on earth.

By living that grace and sharing it in charity we’ll never forget who we are and the world will always recognize us as disciples of the Lord!

PREVIOUS: The Word of God leads us forward in faith and hope

NEXT: Humility is a hallmark of the Kingdom of God