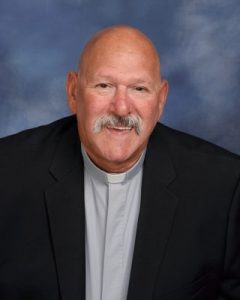 Deacon Myron A. Moskowitz, age 73, died on January 6, 2023, after a long battle with advanced pulmonary disease.

Deacon Moskowitz was ordained on June 4, 2011, by His Eminence, Cardinal Justin Rigali at the Cathedral Basilica of Saints Peter and Paul. He was assigned to Saint Ignatius of Antioch Parish, Yardley, where he remained until 2013. At that time, he was assigned to Queen of the Universe Parish, where he remained until 2015. He then began service at Saint Katherine Drexel School, part of Saint Francis and Saint Vincent Homes in Bensalem. Since 2016, Deacon Moskowitz has been assisting at Assumption BVM Parish, Feasterville.

Deacon Moskowitz was born on June 10, 1949, in the Bronx, New York to Jewish parents. He graduated from Lehman College, a branch of City College of New York, where he majored in physical education/health.  After graduation, Deacon Moskowitz found employment in real estate development. He married his wife Mary in 1990, who shared her Catholic faith with her husband. Deacon Moskowitz then began studies in the RCIA program, and he entered the Catholic Church at the Easter Vigil on April 3, 1999. This led Deacon and Mary Moskowitz to the Archdiocese of Philadelphia, where he found employment teaching at Cardinal Dougherty High School as a theology and physical education teacher.

In addition to his wife Mary, Deacon Moskowitz is survived by his children Russell Moskowitz and Jessica Rodas; six grandchildren, and a brother Ira Moskowitz of New York City.

The principal celebrant will be the Most Reverend John J. McIntyre, concelebrated by Reverend Michael J. Davis. The Deacon Assisting at the Liturgy of the Word will be Deacon Michael L. Cibenko. The Deacon Assisting at the Altar will be Deacon Ronald L. Lewis. The Homilist will be Reverend Michael J. Davis. Interment will follow at All Saints Cemetery, Newtown.