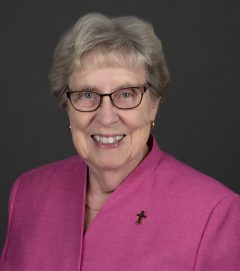 Sister Janice worked most recently as a Major Gifts Officer for the Catholic Foundation of Eastern Pennsylvania. Before that, she spent the majority of her 66 years as a Sister of Mercy serving in a variety of ministries in the Diocese of Allentown.

She worked in Stewardship and Development, calling on donors to the Bishop’s Annual Appeal. She was Director of the Office for Ministry with Persons with Disabilities.

Sister Janice was a former Supervisor of Special Education and for sixteen years served as principal of the Mercy School for Special Learning. Her work in special education also extended to working with infants diagnosed with disabilities. She was a former assistant director of Catholic Charities, Diocese of Allentown.

Previously, she was a special education teacher at St. Katherine Day School, Philadelphia, and had several elementary teaching roles in Catholic Schools in the Diocese of Allentown and the Archdiocese of Philadelphia.

Over the course of her ministerial career, she served on numerous committees and advisory boards related to persons with disabilities and to special education. She was the recipient of several related awards and a past honoree at the Catholic Charities Gala of Allentown.

Born in Philadelphia, she was the daughter of the late Jane and Joseph Johnson. She was predeceased by a brother, John Joseph, who died at an early age. Janice was a loving compassionate woman of mercy who gave generously of herself in every aspect of her life.

In leu of flowers, donations In Sister’s name would be appreciated. Please send to the Sisters of Mercy of the Americas at the above address.

All attending must be fully vaccinated and wear masks.

NEXT: Sister Elizabeth Mary Murphy, who ministered for 45 years in the Archdiocese of Philadelphia, dies at 92