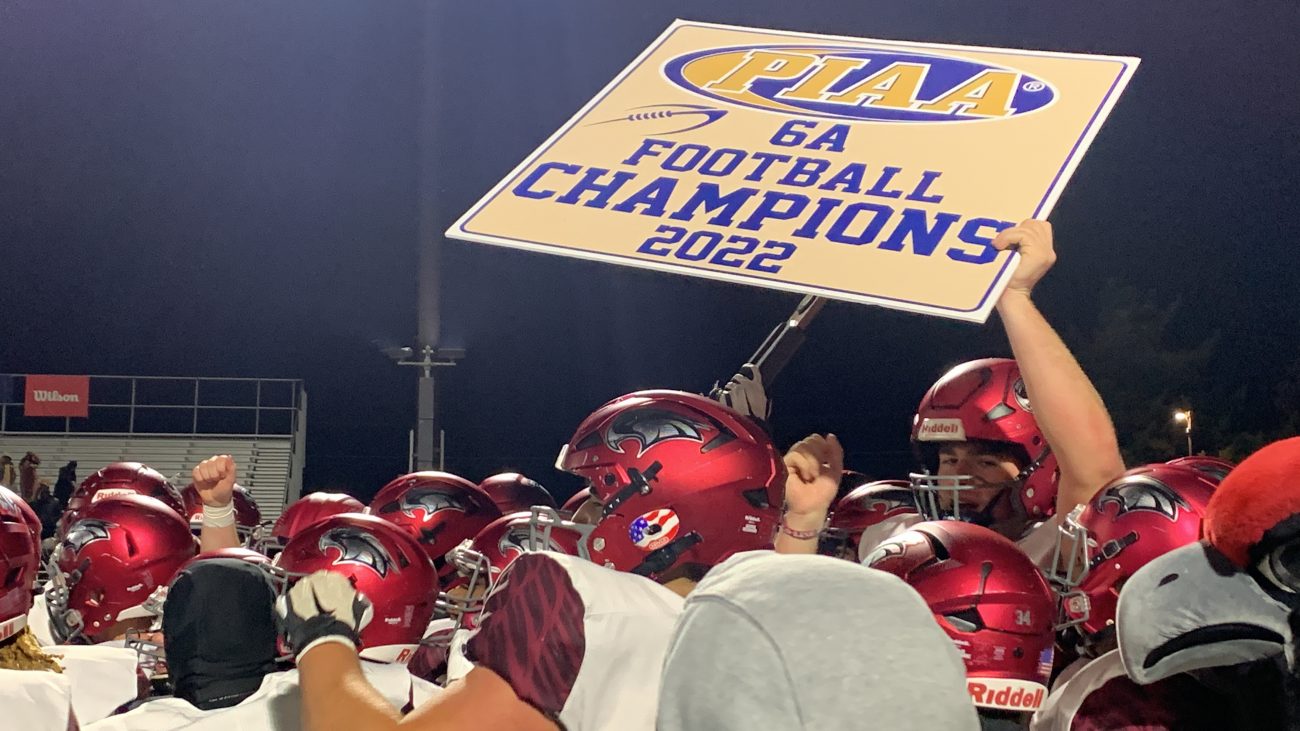 St. Joseph’s Prep raises a sign to the sky after 42-7 victory in the 2022 PIAA Class 6A championship. (Photo: John Knebels)

MECHANICSBURG – It’s been a little over a month since the St. Joseph’s Prep football team corralled its seventh state crown and fourth in five years.

When the players and coaches left Cumberland Valley High School December 10 after overwhelming Harrisburg, 42-7, they celebrated on a long bus ride on the way back to North Philadelphia. The days that followed were replete with constant congrats from classmates, teachers, family, and friends.

In time, the players moved on to the next chapter. Some, like senior Mike DiTrolio, immediately prepared to resume his burgeoning wrestling career. A few began thinking about spring sports, which is suddenly less than three months away.

Players such as senior center Julian Cervantes knew their scholastic athletic careers had come to an end. They left with no regrets, for they had left everything they had on the field.

Now, it was time to plan for college.

“After the season is over it takes a little to really settle,” said Cervantes. “I was unbelievably happy in the moment and proud of my team. After about a week of no football, I was already bored. Being around the team and the coaches means so much to this program as a whole.

“The one thing about the season ending is you get to rest your body and begin full recovery. You also get a break from such a focusing sport. This is definitely an upside because you get to relieve some stress and relax.”
That closeness, he said, has not ebbed, nor will it.

“Even though the season is now over, I still see all the players in school and sit with them at lunch,” said Cervantes. “The bond between everyone on the team is unbreakable. You can see that every time you look within this program. I can look at everybody on the team and call him my brother.”

For junior Kahseim Phillips, the standout running back enjoyed the memory of scoring two touchdowns – once on a 10-yard reception from Catholic League Most Valuable Player and Pennsylvania PIAA Class 6A Player of the Year junior quarterback Samaj Jones (four TD passes and a game-opening 65-yard scoring haul), and later via a three-yard run – that helped the Prep build an insurmountable 35-0 halftime lead.

“The state championship was our best game,” said Phillips, a graduate of Bryn Mawr’s St. Aloysius Academy grade school. “I just love how we all came together and won it. It was just a great way to send our seniors off for their last high school game and end the season on a high note.”

The difference between those upperclassmen and Phillips is that the affable rusher has another chance to experience a state title yet again next fall.

“It really doesn’t take me long to get back to work,” said Phillips. “I took two weeks off and got back training with my trainer, Darren Swift, because every part of the year matters to us going back to win states again.”

From the time the fourth quarter ended and the Hawks listened to an impassioned speech by coach Tim Roken before screaming and jumping in unison while raising the state title trophy to the sky, Phillips recognized something important.

“The benefit of taking time after the season is getting better physically and mentally to help get ready for the offseason,” said Phillips. “I’m going to run track in the spring.”

Phillips recognized something else that was arguably more important than any gaudy statistic or championship hardwood.

“When reflecting, I try to keep God first as much as I can,” said Phillips, “because He is very important piece to my success.”